Imaging characteristics of thoracic sarcomas – an illustration of interesting cases

Fig. 3: Axial CT of the chest demonstrating metastatic disease from a uterine...

Fig. 8: Osteosarcoma invading the left lung apex and pleura but sparing the subclavian... 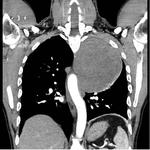 Although there is considerable overlap, it may be possible to favour a diagnosis of thoracic sarcoma over primary lung cancer or lung metastases, based on radiological appearances.

Metastases to the lungs is common with extra-thoracic sarcoma, in particular extremity sarcoma. Approximately 20% of patients with extremity sarcoma will have pulmonary metastasis at one point in their illness. Patients being considered for sarcoma metastatectomies may require sequential thoracic CTs to demonstrate that the number and growth rate of metastatic lesions is controlled.

The commonest sarcomas to metastasise to the lungs are osteosarcoma and Ewing’s sarcoma1, which typically manifest as round smooth nodules.  Their location is commonly subpleural or in the lung periphery and in the lower lobes (Figure 3). Metastases from osteosarcoma often demonstrate calcification (Figure 4). A lung primary can be differentiated, due to it usually appearing as a solitary mass, with a spiculated, ill defined contour.

Sarcoma metastases can appear very similar to metastases from other primaries such as testicular and renal cancer. If a patient has a known primary extrathoracic sarcoma, and lung nodules, as described above, are detected, they should be considered as being highly suspicious of metastases.

Imaging, in particular PET/CT, also has a role to play in assessing tumour response to chemo-radiotherapy (Figure 5). A well recognised post-treatment phenomenon to be aware of is that chemotherapy can sometimes lead to sarcoma metastases becoming cystic (Figure 6).

The resectability of tumours which do not involve the chest wall, is generally determined by criteria similar to those used in cases of primary lung cancer and relates to the proximity of the lesion to the mediastinal structures (Figure 7).

For lesions involving the chest wall, important anatomical considerations are whether the tumour invades the brachial plexus2 or subclavian vessels (Figure 8).

For chest wall sarcomas it is important to evaluate whether the lesion invades the muscles of the chest wall. This has an important bearing on the need for chest wall reconstruction (Figures 9).

Similary, lower thoracic sarcomas need to be scrutinized for sub-diaphragmatic invasion, for which MR can be useful (Figure 10).

Depicting invasion of the spinal canal with MR can also assist with surgical planning and the need for specialist spinal as well as thoracic surgical intervention  (Figure11).

The chest wall is the most common site for thoracic sarcomas and they can originate either in bone or soft tissue. The commonest osseous types are chondrosarcoma and Ewing’s and the most common soft tissue type is liposarcoma. Primary pulmonary sarcomas are rare and can mimic bronchogenic carcinomas so they are usually diagnosed only following a biopsy and exclusion of distant primary3.

Sarcomas of the thorax, generally appear of heterogeneous appearance and enhancement on CT and MRI depending on the degree of necrosis, haemorrhage and cystic change .  Clues to the histopathological origin of the tumour can sometimes be provided by the radiological appearances. A summary of the different features of thoracic sarcomas is summarised in the tables below. 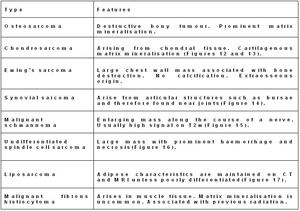 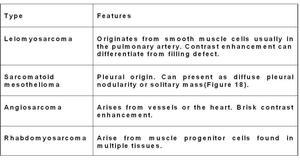