Imaging of the normal male urethra from the neonate to the elder: radiologic anatomy in fluoroscopic urethrography.

Fig. 2: The location of the internal urethral sphincter in association with the...

Fig. 3: a. RUG: Posterior urethra may not be shown at all even in normal subjects....

Fig. 5: The prostatic urethra begins at the vesical neck, courses through the prostatic...

Fig. 6: The verumontanum produces an oval filling defect at the middle of the posterior...

Fig. 7: The intermuscular incisura creates an indentation at the anterior wall of the...

Fig. 9: The prostatic utricle may fill with contrast during urethrography, creating a...

Fig. 10: Beginning from the apex of the prostate gland, the membranous urethra traverses...

Fig. 12: RUG shows the anterior urethra as a long, wide lumen that tapers smoothly to a...

Fig. 13: The “sump” of the bulbous urethra (yellow arrow) located at the proximal...

Fig. 14: The bulbospongiosus muscle may produce a false image of stenosis of the whole...

Fig. 15: The constrictor nudae muscle, creates a mild indentation at the bulbous...

Fig. 16: When there is forceful injection of contrast material in RUG or more commonly ...

Fig. 17: During VUG in uncircumcised patients, contrast material may accumulate between...

Fig. 18: Urethrograms in boys and adults do not differ as far as radiologic anatomy is...

Fig. 19: Anatomy of the male urethra.

To understand urethrography images and the differences in the appearance of anterior of posterior urethra depending on the type of the urethrography performed, one should consider the presence of the external urethral sphincter at the urogenital diaphragm. 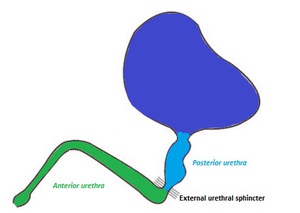 The resistance that the external urethral sphincter exerts to the retrograde (ascending) injection of contrast in Retrograde Urethrography (RUG) creates full distension and therefore better depiction of the anterior urethra.

In a similar manner, the resistance that is exerted at the same level of the external urethral sphincter to the descending flow of contrast during micturition explains the better dilatation of the posterior urethra in Voiding Urethrography (VUG).

The posterior urethra in RUG may be minimally opacified, depicted as a thin linear structure, because contrast flows unimpeded into the bladder. Contrast flow may even stop at the level of the urogenital diaphragm and posterior urethra may not be shown at all. These imaging findings should never be mistaken for pathology and each part of the urethra should be appreciated by the appropriate urethrogram and when possible by both examinations. Retrograde urethrography (RUG) evaluates better the anterior, while voiding urethrography (VUG) the posterior urethra. Fig. 3

In classic urethrography male urethra is seen as a smooth tubular structure, shaped like a horizontally inverted “S” (when penis is not erect) suspended by the urogenital diaphragm and the suspensory ligament. 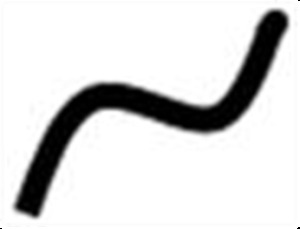 The prostatic part of the urethra begins at the vesical neck and internal sphincter, courses through the prostatic gland and ends at the urogenital diaphragm.

It is approximately 3-4cm long, has a crescent shape and is the widest and most distensible part of the male urethra measuring 1- 1,5cm. Fig. 5

There are several urethral and paraurethral structures that can be indirectly depicted in the prostatic part of the urethra on an urethrogram, such as:

Beginning from the apex of the prostate gland, the membranous urethra traverses the urogenital diaphragm, which contains the external urethral sphincter and pair of Cowper’s glands on each side.

It is the shortest (1-2cm) and the narrowest part of the male urethra with a maximum width of 5-7mm during voiding. It is also the most fixed and thus the least distensible part of the urethra in fluoroscopic imaging studies. Fig. 10

The membranous urethra lies specifically between two radiologic landmarks: the distal end of the verumontanum (proximally) and the conical end of the bulbar urethra (distally).  Fig. 11

In VUG it appears as reduced urethral lumen distally to the prostatic urethra, while in RUG as a thin, opaque line continuing cephalad from the conical tip of the bulbous urethra. Since it is located more proximal to the external sphincter, it is depicted with a widest lumen in VUG than in RUG studies, but regardless of the type of urethrography performed it remains the narrowest of the four parts of the male urethra. The urogenital diaphragm and the external sphincter usually produce a circumferential narrowing of the urethral lumen, marking the location of the membranous urethra. Fig. 11

Bulbous and penile (or pendulous) urethras

The anterior urethra is the longest of the urethral parts (14–15 cm), surrounded by the corpus spongiosum penis.

The penoscrotal junction can be identified on urethrograms by a mild angulation caused by the suspensory ligament. Depending on the tone of the ligament, the positioning of the patient and the degree of traction of patient’s penis along the thigh during RUG, the anterior urethra has a more or less elongated shape. Fig. 12

Its width is rather uniform at its whole length except from two normal dilatations:

The bulbospongiosus (or bulbocavernosus) muscle may produce a false image of stenosis of the whole anterior urethra at VUG when the whole muscle contracts that usually quickly resolves.  Fig. 14

A musculotendinous sling of the bulbocavernous muscle called constrictor nudae muscle,creates a mild indentation at the bulbous urethra at the urethrogram, when contracted, that should not be confused with a stricture.  Fig. 15

Parallel to the course of the anterior urethra the periurethral glands of Littré are distributed, most of which are located around the fossa navicularis and the urethral sump.  When there is forceful injection of contrast material in RUG or more commonly  when strictures or chronic inflammation are present,  reflux of contrast into ducts of these glands or veins of the corpus spongiosum may be depicted.  Fig. 16  Fig. 19

At the bulbous urethra drain also the Cowper’s glands ducts, that may infrequently opacify as well, appearing as a tubular structure extending proximally from the ventral surface of the bulbar urethra toward the urogenital diaphragm.  Fig. 19

During VUG in uncircumcised patients, contrast material may accumulate between the glans penis and the prepuce.  Fig. 17

Differences in urethrograms regarding age

Urethrograms in boys and adults do not differ as far as radiologic anatomy is concerned. Howerver, there are differences concerning caliber and length of the male urethra between different age groups and between individuals, especially regarding the penile urethra part and the prostatic part in men with benign prostatic hyperplasia.

Some variants may be found more frequently in children than in adults, such as indentations from plica collicula, the intermuscular incisura and the internal urethral sphincter.   Fig. 18