Fig. 3: Distributions of compressed breast thickness for each mammography unit. The...

Fig. 4: Distribution of breast glandularity obtained from Volpara. Most of breasts show...

Fig. 5: Comparison of MGD provided by mammography manufacturers and MGD adjusted for...

Fig. 6: Bland-Altman plots of system MGD and MGD adjusted for BD, for each mammography...

The overall mean compressed breast thickness was (53.4 ± 14) mm, with some differences among systems, as illustrated in Fig. 3. A significant difference (p < 0.0001) versus the other systems was found for the GE Senographe DS that has a smaller field-of-view (18 x 24 cm2) and therefore is used to image breasts limited in size, and for the IMG Giotto Image 3DL which showed a miscalibration in the estimation of compressed breast thickness. 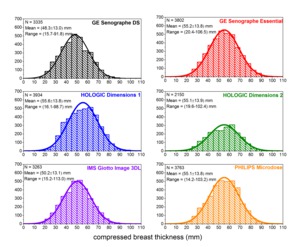 Fig. 3: Distributions of compressed breast thickness for each mammography unit. The mean value is around 55 mm for four out of six systems. Lower mean values were measured by the GE Senographe DS, with a smaller field-of-view compared to the other systems, suitable to image relatively small breasts, and by the IMS Giotto systems which systematically underestimated breast thickness, demonstrating a calibration problem.

The distribution of breast glandularity obtained by Volpara confirmed results already published, indicating that the “typical breast density” is much lower than 50%. Median glandularity was 16.4% (range 0% – 74.9%), but very few breasts showed glandularity above 50% (Fig. 4). 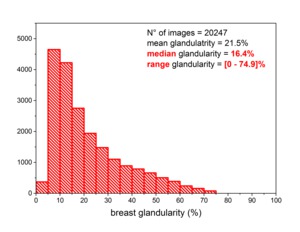 Using breast glandularity to calculate MGD as required by the Dance model, and comparing results with MGD data provided by manufacturers (applying different models and assumptions on breast composition) and extracted from the image headers, comparison plots depicted in Fig. 5 were obtained. 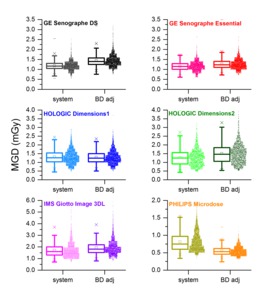 Fig. 5: Comparison of MGD provided by mammography manufacturers and MGD adjusted for breast density for each of the six systems included in the study. System MGD was mostly lower than MGD adjusted for breast density. The opposite was observed for the Philips system, for which system MGD distribution was higher, and for one of the two Hologic systems showing comparable results.

The Wilcoxon test demonstrated that median system MGD were significantly lower than median MGD adjusted for breast density in all cases. (Table 2).

Differences between system MGD, where breast composition is often assumed to be 50/50, and MGD adjusted for breast density are better enhanced by Bland-Altman plots [10], as shown in Fig. 6. The difference (with sign) between system MGD (MGDsystem) and MGD adjusted for breast density (MGDBDadj) is represented case-by-case as a function of system MGD. The solid line at the center of the distribution, parallel to the x-axis, is the mean value, while the two dashed lines indicate the width (two standard deviations) of the distribution of the differences. 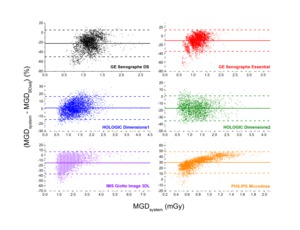 Fig. 6: Bland-Altman plots of system MGD and MGD adjusted for BD, for each mammography unit. The absolute difference for each case is represented by an individual point on the y-axis as a function of the system MGD. The solid line, parallel to the x-axis is the mean difference; (center value of the distribution of MGD differences); the dashed lines are the (mean – 2*SD) and (mean + 2*SD) values, with SD standard deviation of the distribution of MGD differences.
Home | Browse posters | Help | Privacy policy | Disclamer | Contact | myESR
© 2003-2020 ESR - European Society of Radiology