Benign pathology of the salivary glands.

Fig. 1: Anatomy of the parotid gland in axial section

Fig. 2: Anatomy of the submandibular and sublingual glands

Fig. 11: Ultrasound of the submandibular gland in a patient with HIV - note the large...

Anatomy of the major salivary glands

The parotid glands are the largest salivary glands and secrete only serous fluid. Each gland is positioned between the ramus of the mandible and the styloid process, with the duct opening lateral to the second upper molar tooth.2 The internal jugular vein, external carotid artery and facial nerve traverse through the gland. The gland can be divided in to superficial and deep lobes by drawing a line from the posterior aspect of the mandibular ramus to the mastoid process.

As the parotid develops it is encapsulated in the second trimester of pregnancy and incorporating lymphatic tissue, therefore lymph nodes can be seen within the parotid parenchyma. The other salivary glands do not contain lymph nodes, however lymphocytes are encountered.3 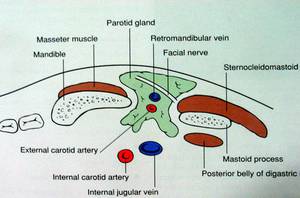 The submandibular glands are found along lingual surface of the body of the mandible, palpable inferolaterally to mylohyoid. The duct is around 5cm long and runs between the mylohyoid and hyoglossus muscles.2

The sublingual glands are the smallest of the major salivary glands, found deep within the sublingual space between the genioglossus muscle and mandible.2 Each gland has between 8-20 small ducts which open either side of the frenulum. Several of the ducts may also have a common drainage pathway with the submandibular duct.

The glands are best visualised with a high frequency transducer (10-15MHz) with assessment in two perpendicular planes. In addition, a curvilinear lower frequency (5-10MHz) can be used to assess the deep aspect of the parotid gland.

Tip: The lingual vein can be easily mistaken for the submandibular duct as it runs in the same plane. Ensure that any tubular structure does not have flow in it and cannot be followed past the gland. 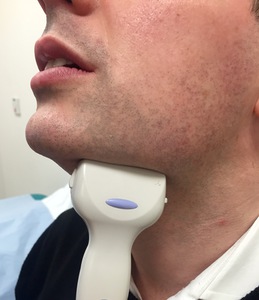 The use of a sialogogue can be particularly useful in assessment of the ducts (Fig. 4). Care should be taken when scanning to apply very gentle pressure so not to obscure a dilated duct. The patient can also be asked to 'blow out the cheeks' to improve the view of the parotid duct opening and visualise a stone within the duct.

Benign Pathology of the Salivary Glands

The clinical history is usually of recurrent pain and swelling of the affected gland, particularly before meals.

80% of salivary stones are found within the submandibular gland,4 of which 80-90% are radiopaque. The submandibular gland is more prone to stone formation because of the alkaline nature of the saliva which is thick and viscous, and also due to the dependent position of the gland.3

20% of calculi are found in the parotid gland, of which 50% are radiopaque.4 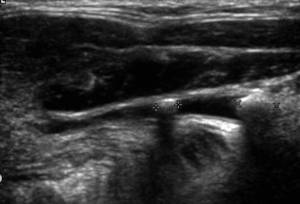 Tip: 25% of patients with stones will have multiple calculi, therefore it is important to assess both sides ( Fig. 5,  Fig. 6 ).3 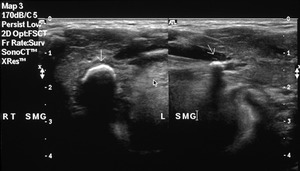 Tip: Ductal dilatation can also be cause by a stricture or an obstructing mass lesion.

It is possible to demonstrate distal ductal calculi with plain film radiographs which may be difficult to visualise with ultrasound ( Fig. 7 ).

Viral infection primarily affects the parotid causing pain, fever and swelling, and most commonly due to mumps. Infection results in unilateral then bilateral swelling ( Fig. 8 ). 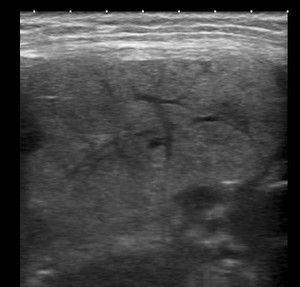 Chronic infection may be due to poor oral hygiene or secondary to chronic inflammation, for example as a result an obstructing stone or stricture. The salivary gland appears small and hypoechoic. This is also observed in the frail elderly population who are prone to dehydration.

Recurrent disease results in ductal dilatation and ballooning of the alveoli called sialectasis.

Sjögren's is an autoimmune disease which affects the secretory glands, resulting in a dry mouth and dry eyes. It affects women nine times more often than men. On ultrasound the salivary glands may be enlarged, having  hetergenous appearance with multiple small areas of hypoechogenicity, Fig. 9. Labial gland biopsy is commonly used for diagnosis and demonstrates lymphocytic infiltrates.

Tip: Patients with Sjögren's have 5% risk of lymphoma arising within the gland. 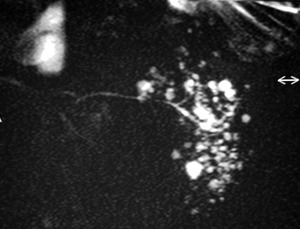 On ultrasound the salivary glands are enlarged with a hetergenous appearance and multiple cysts. Multiple small areas of hypoechogenicity and small intra-glandal lymph nodes are also observed.

The majority of cystic lesions within the major salivary glands are benign. However, cystic lesions pose a diagnostic challenge where the walls of the lesion is irregular, nodular or the lesion contains a solid component. Frequently FNAC will be inaccurate if the wall is not appropriately sampled. Underlying malignancy needs to be carefully considered.

Tip: Always be suspicious of the cystic lesion in a salivary gland - mucoepidermoid tumours are the most common type of salivary malignancy and can be predominantly cystic,  Fig. 13,  Fig. 14. 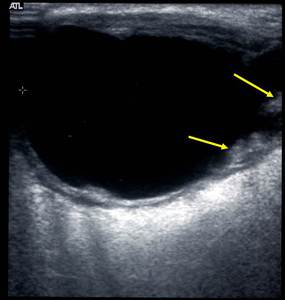 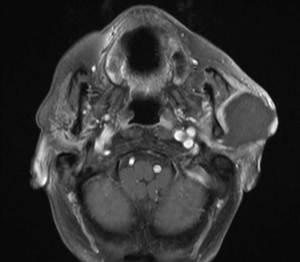 A ranula is a mucocoele of the floor of the mouth arising from the sublinligual gland. A 'plunging' ranula represents a lesion that extends deep to mylohyoid and presents as both an intra-oral and extra-oral swelling.

Tip: Remember the rule of 80% for benign salivary lesions

80% of salivary gland masses are benign

80% are found within the parotid gland

80% lie within the superficial lobe 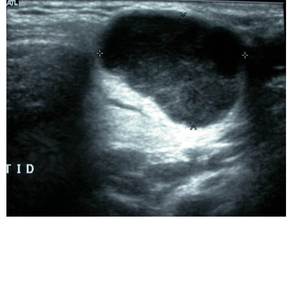 If the lesion is large or poorly visualised MR can help to delineate the lesion. Reassuring features on MR are

Non-inflammatory swelling of the major salivary glands, usually bilateral and most commonly affects the parotid.  Associated with endocrine abnormalities, such as diabeties, chronic alcohol abuse but often idiopathic.