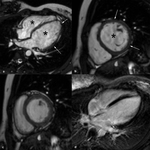 Fig. 1: (a-d). A 18 year-old woman with fatigue diagnosed of dilated cardiomyopathy at...

Fig. 3: (a-c). A 17 months-old female presents with weight and growth stagnation and...

Fig. 4: (a, b). A 13 year-old woman with hypertrophic cardiomyopathy diagnosed before... 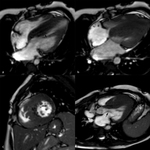 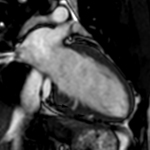 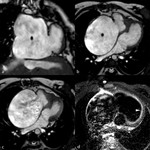 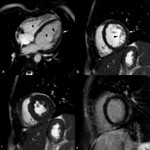 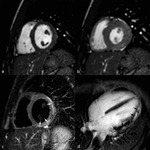 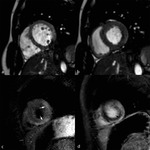 Dilated cardiomyopathy (DCM) is the most common form of cardiomyopathy in children, characterized by dilatation and systolic dysfunction of the left ventricle (LV) or both ventricles, in the absence of congenital, valvular or coronary artery disease or any systemic disease known to cause myocardial dysfunction.

Cardiac MRI has gained an important role in the diagnosis of patients presenting with systolic heart failure.

Hypertrophic cardiomyopathy (HCM) is defined by the presence of unexplained myocardial hypertrophy in the absence of cardiac or systemic cause.

it is the second most common form of hearth muscle disease and comprises abouy 35-40% of cardiomyopathies in children.

Rarely, HCM may present with cardiac arrest and sudden cardiac death (SCD). It is the most common cause of premature SCD due to malignant ventricular arrhythmias.

Cardiac MR imaging has evolved into a multiparametric imaging modality allowing a truly comprehensive of disease, providing information of cardiac phenotype, its functional and hemodynamic characterization, presence and extent of microvascular dysfunction and myocardial fibrosis.

There is a great variability of HCM phenotypes with onset at virtually any age, including in utero:

Other morphologic and functional manifestation include:

Risk death or heart transplantation factors in pediatric population include:

Restrictive cardiomyopathy (RCM) is among the rarest heart muscle disease in children characterized by enlargement of both atria and both ventricle, restrictive physiology and normal systolic function and size.

Early diagnosis is difficult due to the lack of heart symptoms

Arrhythmogenic right ventricular cardiomyopathy (ARVC) is characterized by progressive fatty or fibro-fatty replacement of the right ventricular (RV) myocardium, but this has been shown to also extend into the LV in some cases.

The revised Task Force criteria for the diagnosis of ARVC by MRI include:

Risk death or heart transplantation factors in pediatric population include:

It is an important cause of morbidity and mortality in children and it may lead to acute heart failure, dilated cardiomyopathy, and sudden cardiac death.

Studies about the utility of MRI in pediatric acute myocarditis are few.