Paget's disease of the bone - Imaging the appendicular skeleton

Fig. 3: Multimodality imaging of the lytic phase of Paget’s disease of the right...

Fig. 5: Anteroposterior radiograph of the pelvis shows mixed disease of the right femur...

Fig. 10: Paget’s disease of the right scapula and proximal humerus on anteroposterior...

Fig. 11: Anteroposterior radiographs of the distal right femur and the pelvis (left and...

Fig. 13: There is marked expansion of the right hemi-pelvis and right femur and the...

Fig. 14: Protrusio acetabuli secondary to Paget’s disease of the left hip is seen on...

Fig. 16: Anteroposterior (right) and lateral (left) radiographs of the right tibia and...

The incipient osteolytic phase is characterized by well-defined osteolysis with a leading edge of resorption.  In long bones, this sharply-demarcated, wedge-shaped advancing edge of osteolysis is seen to advance from the subarticular or metaphyseal region into the diaphysis and is typically referred to as a ‘cutting-cone’, ‘blade of grass’, or ‘candle flame sign’ (Fig 3). 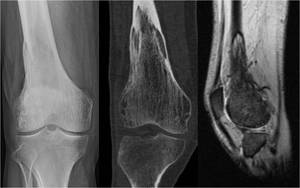 Fig. 3: Multimodality imaging of the lytic phase of Paget’s disease of the right distal femur. The ‘blade of grass’ leading edge of osteolysis is clearly demonstrated on this frontal radiograph of the right knee. Oblique craniocaudal reconstructed CT image and sagittal T1-weighted MR image from the same patient outline the same appearance.

The intermediate mixed lytic/sclerotic phase is the stage at which Paget’s disease of bone is most commonly diagnosed.  It is characterized by thickening of the cortex, expansion and deformity of bone, loss of corticomedullary differentiation (due to endosteal new bone formation obliterating the medullary cavity) and accentuated coarse trabecular markings.  The advancing wedge of resorption described above may be also seen.   Similar to the initial osteolytic phase, sclerosis and expansion in the appendicular skeleton are usually first seen in a subarticular or metaphyseal location, at the site of initial osteolysis.

At this stage, it is sometimes possible to discern the two phases within the same bone:  the early osteolytic front seen to have advanced further into the diaphysis with bone showing signs of the later mixed lytic/sclerotic phase following a few centimetres behind (Fig 4 - 6).

Fig. 5: Anteroposterior radiograph of the pelvis shows mixed disease of the right femur as well as iliac and pubic bones bilaterally. Axial CT scan on bone window at the level of the SI joints demonstrates the two phases within the same bone: the posterior medial end of the right iliac bone is lucent whereas there is expansion and sclerosis of the more anterior right iliac wing. 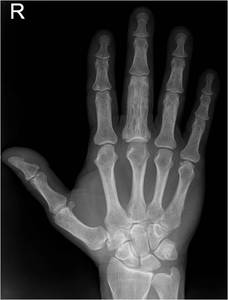 Fig. 6: Paget’s disease affecting the hands is rare, with hand involvement reported in less than 1% of patients affected by the disease. Anteroposterior radiograph of the right hand shows expansion of the proximal phalanx of the middle finger with thickened bony cortex, loss of corticomedullary differentiation and well-defined lucent areas in keeping with mixed lytic/sclerotic disease.

In the late sclerotic or ‘burnt-out’ form of Paget’s disease, considerable new bone formation is evident as a diffuse increase in density, medullary sclerosis, and markedly increased bone size.  Bone deformity is often present at this stage as random deposition of new bone matrix leads to structurally weak bone that is easily bent by otherwise normally innocuous forces (Fig 7 - 10). 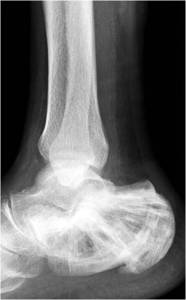 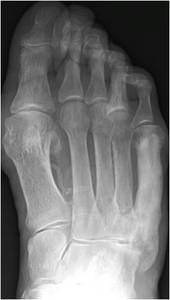 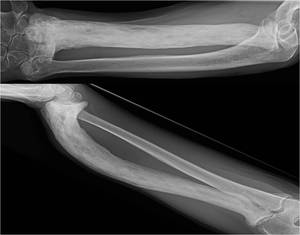 Fig. 9: Anteroposterior (top) and lateral (bottom) radiographs of the right forearm show dense sclerosis and marked deformity of the right radius in keeping with late osteosclerotic phase Paget’s disease. Bone deformity is not exclusive to the weight-bearing limbs and may be particularly disabling in the upper limbs. 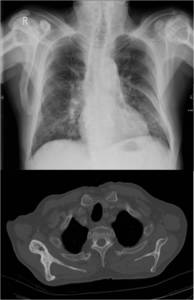 Fig. 10: Paget’s disease of the right scapula and proximal humerus on anteroposterior radiograph of the chest (top) and on bone window on axial CT (bottom). The disease is predominantly in the burnt out phase as demonstrated by the thickened, sclerotic right scapula in stark contrast to the normal left scapula.

Complications of Paget’s disease of bone depend on the affected bone as well as disease activity and duration.

Incremental stress fractures (‘banana fractures’, ‘pseudofractures’ or ‘Looser’s zones’) may be seen in the long bones.  These stress fractures are incomplete transverse fractures of the convex surface of the bone, typically lying at right angles to the long axis of the affected bone.  They are more common with increasing deformity of the affected bone due to the increasingly abnormal transmission of forces:  typical sites include the lateral aspect of a laterally bowed femur or anteriorly along an anteriorly bowed tibia (Fig 11). 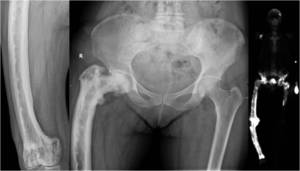 Pagetic bone is also more prone to complete fracture following minor or no trauma. Such pathological fractures are typically transverse and show poor healing with a high rate of non-union (Fig 12). 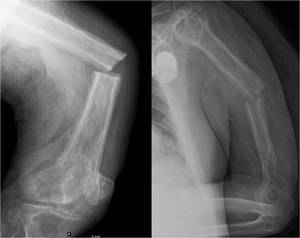 Paget’s disease of bone adjacent to weight bearing joints is thought to cause accelerated osteoarthritis of the affected joint.  This is likely due to altered mechanics of transmission of force through the joint due to the deformity of the Pagetic bones forming the joint.  Non-weight bearing joints adjacent to diseased bones also show accelerated degenerative change; the reasons for this are poorly understood (Fig 13 - 15). 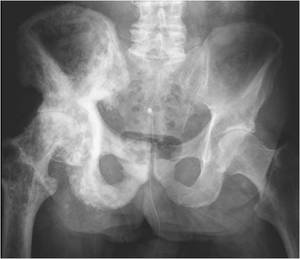 Fig. 13: There is marked expansion of the right hemi-pelvis and right femur and the right iliopectineal line is thickened. Multiple well defined foci of lucency and sclerosis are seen in keeping with mixed lytic/sclerotic Paget’s disease of the right hemi-pelvis and femur. Complete loss of joint space together with subchondral sclerosis are noted at the right hip joint in keeping with advanced degenerative change. The left hip joint, unaffected by Paget’s disease, is comparatively unremarkable. Total arthroplasty in hip joints affected by Paget’s disease is technically more difficult and outcomes are typically worse than ‘normal’ joints. 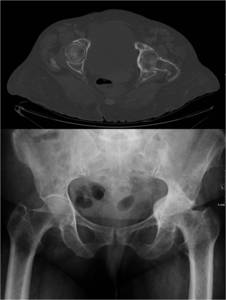 Fig. 14: Protrusio acetabuli secondary to Paget’s disease of the left hip is seen on bone window on axial CT scan (top) and on anteroposterior radiograph (bottom). This condition is defined as intrapelvic displacement of the acetabulum and femoral head, so that the femoral head projects medial to the ischioilial line. It may be primary in origin, however in cases of Paget’s disease it is secondary to weakening of bone. 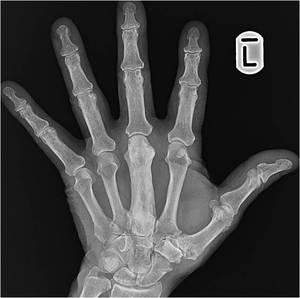 Malignant sarcomatous transformation is a well-recognized complication of Paget’s disease though its incidence is on the decline.  The most common form of sarcomatous transformation is into osteosarcoma, usually of the osteogenic type.  It carries a poor prognosis.  Fibrosarcoma, chondrosarcoma, and malignant fibrous histiocytoma may also be rarely seen in the context of Paget’s (Fig 16 - 18). 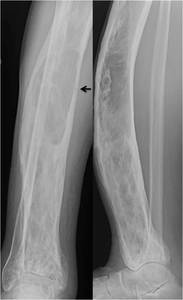 Fig. 16: Anteroposterior (right) and lateral (left) radiographs of the right tibia and fibula of a 75-year-old male were performed after he complained of increasing shin pain. Radiographs demonstrated burnt-out Paget’s disease with a well-defined medullary based lucency in the middle third of the tibia causing thinning of the overlying cortex. A pathological fracture (black arrow) at this location was suspected and was further evaluated by cross-sectional imaging. 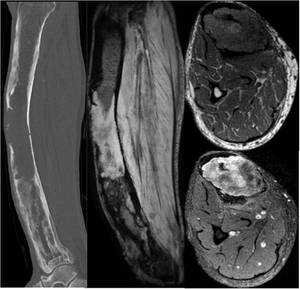 Fig. 17: Sagittal unenhanced CT scan (left) confirms a lesion of soft tissue attenuation in the mid shaft of the right tibia with destruction of overlying cortex. Sagittal and axial (middle and top right) MR images show a T1-intermediate signal and T2-high signal lesion arising from the medulla of a Pagetic right tibia with oedema in the surrounding soft tissues. The lesion enhanced avidly after the administration of intravenous gadolinium (bottom right). 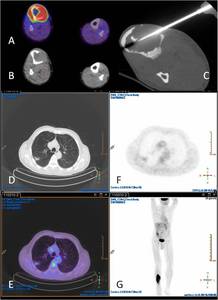