Cardiogenic strokes account for approximately 25% of all ischemic strokes, with an increasing risk in elderly population. Overall, it has a similar frequency throughout the world if adjusted for mean population age.

There are three main subtypes of brain ischemia: 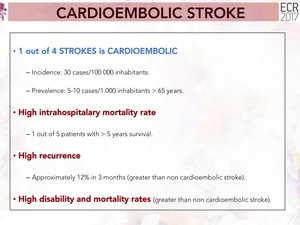 The underlying mechanism of cardioembolic stroke is obstruction of cerebral vessels with embolic debris from a cardiac origin, commonly from left chambers  (Fig. 3). 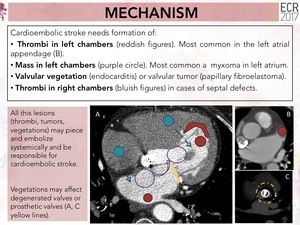 However, abnormal intracardiac communication between the right and left circulation together with a pressure gradient that promotes a right-to-left shunt, may lead to unnatural passage from the venous to the arterial circulation; what is known as a paradoxical embolism.

Emboli from the heart are distributed evenly throughout the body, yet more than 80% of symptomatic emboli affect the brain. The vascular territory affected is equivalent to the distribution of cerebral blood flow, as much as 80% involve the anterior circulation (ie, carotid artery region), and approximately 20% have a vertebrobasilar distribution (Fig. 4). 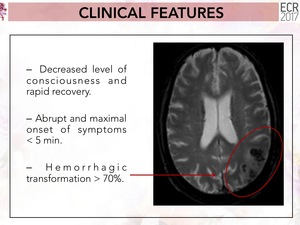 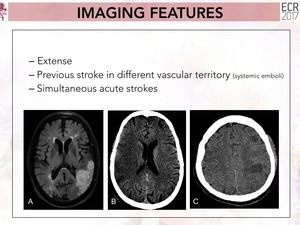 Cardioembolic stroke is largely preventable with an optimal primary prevention. When this is not achieved and stroke occurs, diagnosis of the potential cardiac source is fundamental to avoid further events.

In most patients with stroke of undetermined etiology or infarction with a suspected cardiac origin, no further cardiac evaluation is performed. Actually, only few patients are assessed with CT or MR, so subtle fundamental diagnostic findings may remain undetected. However, revision of both thoracic CT and cardiac MRI studies (whether prior or coincident with the ischemic episode) can provide much information regarding a cardiac or large artery origin of stroke (Fig. 6). In recent years, cardiac CT is increasingly being used as a complementary imaging technique for cardiac assessment after echocardiography. 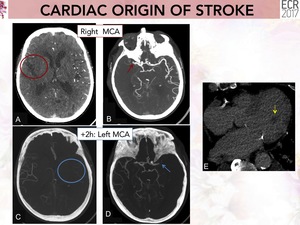 Some authors, even recommend early cardiac and extracranial vascular CT angiography (CTA) additional to brain CT angiography during the evaluation of patients with acute ischemic stroke. They advocate that an earlier risk factor management may potentially reduce recurrence and improve the outcome, while adding only few minutes to the protocol and making radiation dose increase feasible with adjusted protocols.