For this prospective study we conducted a randomized sampling of morbidly obese patients which had undergone bariatric surgery three years before, obtaining 40 patients.

The inclusion criteria were:

The exclusion criteria were:

The study was approved by the local ethics committee. All patients provided written informed consent.

All patients were measured and weighed, barefoot and in light clothing, to determine their body max index (BMI).

The patients were evaluated the day before surgery. An ACUSON 2000 platform 2000 (Siemens, Erlangen, Germany), equipped with a 4–1 MHz multi-frequency convex probe was used. The examination was conducted by a radiologist with more than 23 years’ experience in abdominal ultrasound and 3 years’ experience in elastography who was blinded to the other study results. Patients did not fast beforehand. The technique was performed with the patient supine, the right arm in maximum abduction and the probe over the skin in the intercostal space between the 9th and 10th ribs with breath-holding.B-mode images were obtained of the right liver lobe and the region of interest (ROI) was positioned in segment VI at a depth of 3.5–8 cm below the hepatic capsule, which means we had no problems in performing ARFI in patients with morbid obesity. Fig. 5 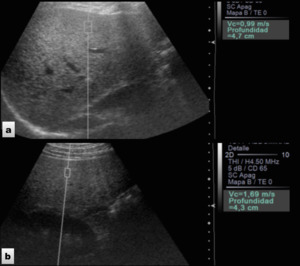 Before ARFI a conventional hepatic ultrasound study was conducted by the same radiologist to determine the subjective grade of steatosis observed (none, mild, moderate and severe). Steatosis was subjectively classified according to the increase in echogenicity of the hepatic parenchyma in comparison to the cortical echogenicity of the right kidney and the decrease in visualisation of the diaphragm and hepatic vessels.  Fig. 6 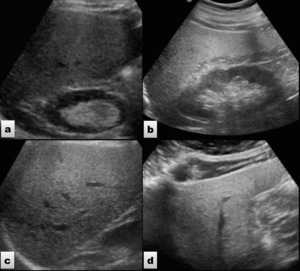