Fig. 3: Margins of epidermal inclusion cyst: (A) Well circumscribed (B) Not...

Fig. 4: Posterior acoustic enhancement seen in epidermal inclusion cyst (A) and (B)

Fig. 5: Echogenicty of epidermal inclusion cyst: (A) Hypoechoic (B) Hyperechoic

Fig. 15: Schwannoma: (A) A well-defined hypoechoic, round with heterogeneous internal...

Fig. 16: Hematoma : (A) A small well defined anechoic lesion in a patient with history...

Fig. 18: Malignant lymphadenopathy: (A) Round hypoechoic lesion with intranodal necrosis...

Fig. 4: Posterior acoustic enhancement seen in epidermal inclusion cyst (A) and (B)

Fig. 5: Echogenicty of epidermal inclusion cyst: (A) Hypoechoic (B) Hyperechoic

Type III is the commonest type which gives it the typical appearance. 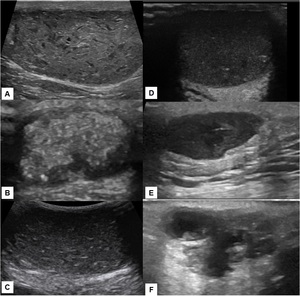 Based on the above ultrasound characteristics the typical appearance of an unruptured epidermal inclusion cyst is:

After evaluating the lesion, a focused scan for the surrounding soft tissue should be done to see for any changes of inflammation or signs of rupture.

Various complications such as infection, rupture or malignant transformation can occur which further alters the appearance of the lesion making the diagnosis difficult.

Cysts are usually lobulated in shape in case of rupture with uncircumscribed margins (Fig. 9) and may demonstrate some internal vascularity.[2,4,5] 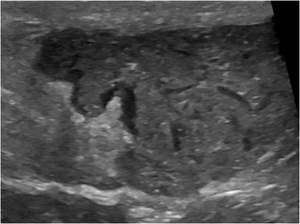 Fig. 9: Ruptured epidermal inclusion cyst – The cyst is lobulated with uncircumcribed margins and a rent in the inferior wall with surrounding hypoechogenicity suggesting rupture.

Patients having rupture present with severe tenderness of the soft tissue swelling and a local rise of temperature. These symptoms are probably due to secondary infections and surrounding reactive changes after rupture of the epidermal inclusion cysts.

Rate of malignant transformtion into squamous-cell carcinoma is about 2.2% according to the study by Bauer with the majority of the carcinomas being well differentiated.[1]

Complete excision of the cyst with its wall must be done to reduce the risk of recurrence which is about 3%.[6] Also proper care must be taken avoid spillage of the contents into the soft tissue, as an inflammatory reaction is then likely to occur.

Various subcutaneous lesions such as lipoma, fibrolipoma, hemangioma, hematoma, abscess, lymph node and peripheral nerve sheath tumours are the common differentials which may mimic the appearance of epidermal inclusion cysts [5] and cause confusion in its diagnosis. 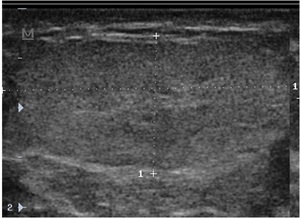 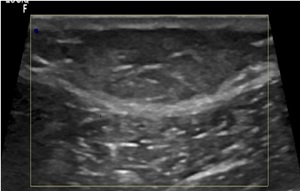 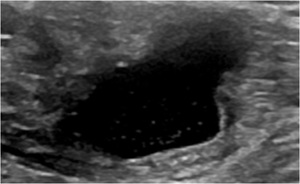 Fig. 14: Ganglion cyst: (A) An ill defined anechoic cystic structure overlying the left wrist joint. (B) Another cystic structure on the dorsal part of the right wrist with echoes within, extending to the joint space with a thin neck. 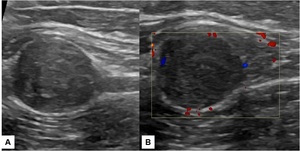 Fig. 15: Schwannoma: (A) A well-defined hypoechoic, round with heterogeneous internal echoes which is seen to be continuous with the nerve distally. (B) Colour doppler shows presence of internal vascularity.

Fig. 17: Reactive lymphadenopathy: (A) Oval hypoechoic lesion with echogenic hilum in the left cervical region (B) On color doppler interrogation, hilar vascularity is noted in another reactive lymph node.

Fig. 18: Malignant lymphadenopathy: (A) Round hypoechoic lesion with intranodal necrosis in the left submandibular region, in a known case of buccal mucosa carcinoma. (B) On color doppler interrogation, minimal peripheral vascularity is noted.

The characteristic imaging appearances of these lesions are summarized (Fig. 19 ) for a quick review. 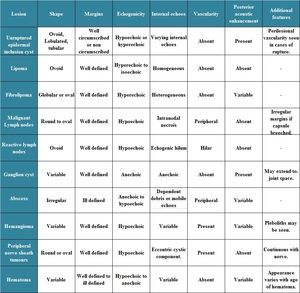