Typical and atypical radiological manifestations of thoracic sarcoidosis with their pathologic correlation. 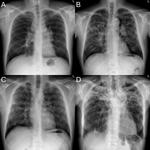 Fig. 2: Frontal chest radiographs of patients with: A – Stage I - bilateral hilar...

Fig. 4: Typical (a, b) and atypical (c, d) lymphadenopathy patterns in two patients...

In general, according to the international 1999 consensus, sarcoidosis should be diagnosed on the basis of correlating clinical symptoms as well as histologic and radiologic findings. Biopsy should be obtained whenever possible. Usually transbronchial biopsy is recommended as primary biopsy site. Biopsy of other affected body regions may be useful, excluding erythema nodosum which does not contain granulomas. It should be stressed that histological findings alone are not diagnostic for sarcoidosis. Similar pathology manifestation can be seen in other granulomatous diseases. Moreover, if biopsy is contraindicated or patient refuses to receive one, diagnosis in some cases can be made on the basis of clinicoradiological correlation alone. In a setting of typical clinical presentation, reliability of diagnosis established in such a way depends on radiological stage of the disease. It is highest in stage I (98%) and stage II (89%) but is much worse in stages III (52%) and stage 0(23%)[1].

The most prominent pathologic finding in the sarcoidosis is presence of the granulomatous inflammation. Granulomas(Fig. 1) are composed of a central core of monocyte derived epithelioid histiocytes, multinucleated giant cells. The inner part is encircled by lymphocytes, mostly CD4+ T helper cells, but also occasional CD8+ T cells, regulatory T cells, B cells and fibroblasts are present. The multinucleated giant cells may display inclusions such as asteroid bodies and Schaumann bodies. Granulomatous inflammation may completely resolve, however minor residual fibrotic changes are often seen. Fibrous tissue is usually initially formed at the periphery of a granuloma next to the adjacent normal connective tissue. Gradually it extends inward, leading to the complete granuloma fibrosis. Granulomas in the lung have a distinctive distribution - they are most prominent in the airway mucosa, perivascularly, in the interstitial tissue of the interlobular septa and pleura[1,2].

Thoracic radiological manifestations of sarcoidosis are observed at some stage of the disease in up to 90% of patients(Table 1, Table 2). Chest radiograph in most cases is the first imaging study performed and in same cases provides enough information to indicate the diagnosis. CT studies are more sensitive and allow to detect subtle parenchymal and lymph nodes abnormalities[3].

In 1961 Scadding presented his classic work describing staging system based on chest radiograph findings[4]. Even though this classification is now more than 50 years old, it is still used because of its prognostic value.

At time of presentation, most patients (up to 50%) have stage I disease. More advanced stages are increasingly infrequent at time of presentation, stage II is seen in 25-30% of cases, stage III in 10-12% and stage IV in 0%. Chest radiograph stage correlates well with disease prognosis. Spontaneous remission is observed in 60%–90% of patients with stage I disease, in 40%–70% with stage II, in 10%–20% with stage III and in 0% with stage IV. It is important to notice that correlation between stage of the disease and the prognosis is only valid for the chest radiograph findings. CT due its superior sensitivity can detect even minute parenchymal abnormalities in patients with no such changes detectable on chest radiographs[5].

According to American Thoracic Society/European Respiratory Society/World Association of Sarcoidosis and other Granulomatous Disorders Consensus Statement on Sarcoidosis, HRCT is indicated in 3 cases[1]:

In patients with advanced sarcoidosis or preexisting conditions it may be hard to detect subtle complications on chest radiograph. CT increases detection rate of superimposed infections and coexisting malignancy.

The most typical chest radiograph lymphadenopathy pattern(Fig. 3), occurring in 85-95% of diagnosed patients, is bilateral, symmetric, well-defined hilar lymph node enlargement. Right paratracheal lymph nodes are enlarged in 75% of cases. Together they form a sign named Garland's triad or a 1-2-3 sign. Lymphadenopathy in other localizations is less frequent, it is found in 50-75% in the aortopulmonary window, 20% in the subcarinal region, 10-15% in the anterior mediastinum, <5% in the posterior mediastinum, <5% intramammary. Lymph node enlargement usually resolves in 2 years’ time, however it may persist for many years. Recurrence following resolution is uncommon. Lymph node calcifications are reported in chest X-rays of up to 20% of patients with sarcoidosis lasting for 10 years or more[6].

CT is particularly useful in detecting lymph nodes abnormalities in patients with prominent pulmonary fibrosis which can impede chest radiograph reading. Due to its superior sensitivity CT displays a different pattern of lymphadenopathy in patients who have sarcoidosis(Fig. 4). Right lower paratracheal lymph nodes are enlarged in 100%; subaortic and paraaortic lymph nodes (lymph nodes of aortopulmonary window) in 95%; hilar in 90%, prevascular in 65%; in posterior mediastinum in 15%. Calcifications are observed in CT in 25-50% of patients, and its prevalence increases with disease duration(Fig. 4). In contrast to densely calcified lymph nodes characteristic for tuberculosis, sarcoid lymph nodes often display a hazy or eggshell calcification pattern[3].

Even though lymphadenopathy in sarcoidosis is often prominent, it rarely causes any symptoms.

In fact, sarcoidosis is most common cause of asymptomatic bilateral hilar lymph node enlargement. Differential diagnosis of such finding includes infection, malignancy and pneumoconiosis however, they usually are present with some clinical symptoms.

Pathologic manifestation of lymph node involvment is chacraterized by diffuse replacement of normal tissue by granulomas(Fig. 5). At the beginning granulomas are discrete and active but with disease progression they coalesce together und display progressive fibrosis. Finally leading to replacement of entire lymph node with fibrotic tissue.

The most characteristic CT abnormality in patients with pulmonary sarcoidosis consists of small (typically 2-4 mm), relatively well defined, rounded nodules, displaying a perilymphatic distribution(Fig. 6, Fig. 7). Nodules can be visible most often in the subpleural (including fissures) and peribronchovascular interstitium, but can also be present adjacent to parahilar vessels and bronchi, in the centrilobular regions as well as in the interlobular and intralobular septa. There is a considerable variation in the involvement of these structures among individual patients. They are most frequently bilateral and symmetric, predominantly seen in upper and middle lung zones. However, nodules can also display focal or asymmetric pattern. In that case patchy abnormal areas of lung can coexist with unaffected lung tissue. In case of patients with extensive disease, micronodules rarely can appear to be randomly distributed. This pattern is seen in less than 1% of patients and should rise a question of different disease diagnosis. Miliary tuberculosis, fungal infections and metastatic disease must be excluded prior to making diagnosis of sarcoidosis. Other rarely seen distribution is pseudo tree-in-bud pattern. It is present in case of clusters of nodules arising in proximity of the branching centrilobular artery mimicking small airways disease[7].

Occasionally nodules can calcify which can coexist with lymph nodes calcification or be an isolated finding.

Although sarcoid granulomas arise as micronodular lesions, they may coalesce over time, forming larger lesions - macronodules. Such changes, observed in 15-25% of patients, take appearance of irregular consolidation measuring 1-4 cm which may have air bronchogram(Fig. 8). On periphery of consolidation individual small nodules can be spotted - an image named “galaxy sign”(Fig. 9). Even though these consolidations are commonly called “alveolar sarcoidosis”, in fact they are the result of numerous interstitial micronodules coalescing together. Occasionally sarcoidosis may display reversed halo sign (atol sign). It initially was thought to be pathognomonic for cryptogenic organizing pneumonia but now is known to occur in number of other diseases including sarcoidosis.

Infrequently sarcoidosis can manifest as isolated mass-like opacity(Fig. 11). In such context smaller accompanying nodules may imitate metastases while small perilymphatic nodules could be mistaken for lymphangitis carcinomatosa.

Pathologic findings in pulmonary disease are similar to those found in the lymph nodes. Granulomas are most commonly found in perivascular, pleural and interlobular septal interstitial tissue as well as airway mucosa. Initially discrete with disease progression they become confluent and associated with fibrosis. Since disease is not uniform in whole lung and local severity varies greatly it results in nodular thickening of interstitium which can be appreciated in the low magnification microscopy as well as HRCT(Fig. 12). It should be stressed that lung parenchyma is relatively spared. Usually only small foci of granulomatous inflammation can be seen in it. However in rare cases parenchymal involvement may be more extensive resulting in relatively big masses which can measure even several centimeters.

True cavitary sarcoidosis is exceedingly rare, more often pseudocavity lesions are seen. They are often reported in patients with fibrotic changes and represent bullae or bronchiectasis.

True cavities are present in only about 0,8% of cases. Thus such finding should rise question of superimposed infectious disease capable of cyst formation - especially tuberculosis or fungal infections. Mycetoma formation may be a result of invasive fungal infection but in most cases it is seen in patients with super infected bullae or cysts in fibrotic stage of the disease(Fig. 13, Fig. 14)[5].

In most patients, parenychymal abnormalities resolve over time. However, approximately 20% of

patients, develop some degree of fibrosis. Since fibrosis develops in areas previously affected by granulomatous inflammation, it is usually patchy and predominantly localized in upper and middle lung zones(Fig. 15).

There are three main types of lung fibrosis[7]:

Common sign of early fibrosis in sarcoidosis is coexistence of reticular opacities, distortion of pulmonary fissures and posterior displacement of main and/or upper lobe bronchi. This is due to increasing loss of upper lobes volume.

Progression of fibrosis results in central distortion of parahilar bronchi and vessels associated with conglomerates of fibrous tissue(Fig. 16).

Honeycombing can be seen in patients with long standing fibrosis. They most frequently are located in subpleural areas of the middle and upper lung zones. Typically there is lower lung zone sparing. However, if honeycomb like cysts are present in basal regions, they can be mistaken for usual interstitial pneumonia(Fig. 17)[5].

Airway involvement in sarcoidosis is relatively common, seen in approximately 65% of patients. In vast majority of cases it is asymptomatic, only 2%-8% of patients have any related symptoms. The most common manifestations of airway involvement include bronchial wall thickening and endobronchial lesions. In case of small bronchi endobronchial granulomas and accompanying fibrosis can lead to their obstruction which may result in CT image of a mosaic attenuation pattern on inspiratory images and air trapping on expiratory studies[5].

Air trapping( Fig. 18) is a very common but nonspecific manifestation of sarcoidosis reported in up to 95% of patients. In about 10% of cases it is reported to be the only finding. There is no difference in the extend of the air trapping among stages of disease. Most patients with sarcoidosis show air trapping in CT in locations suggestive of small airways disease. However, some studies have showed air trapping present at the level of the secondary lobule and patterns suggestive of sublobular, subsegmental, or even segmental involvement. Air trapping may be the only persisting manifestation seen even after regression of parenchymal and lymph node abnormalities[7].

Pleural involvement in sarcoidosis patients is rare, present in 1%–4% of cases. It most commonly manifest as a pleural thickening(Fig. 21, Fig. 22). Pleural effusion(Fig. 22) are second most common pleural finding they usually areexudative or transudative, hemothorax or chylothorax are rarely reported.Usually pleural effusions are minimal and resolve spontaneously within 2–3 months. However, there have been singular reports of massive pleural effusions. Pleural calcifications can only occasionally be seen[5].

Pleural plaquelike opacities are not pathognomonic for sarcoidosis and can be present in silicosis, and coal-worker’s pneumoconiosis[5].