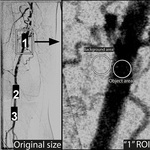 We enrolled 42 patients between February and June 2017. Eligibility criteria were: symptomatic (Fontaine stage II or III) peripheral arterial disease (PAD) and glomerular filtration rate over 60 mL/min /1.73 m2. The number of the patients was determined by increasing the minimal recommendation of the U.S. Food & Drug Administration by 33% [20].

SNR measurements were carried out in 1902 ROIs of 110 images. SNR was determined by the ratio of the average signal value to the image’s random intensity variations, as introduced by Rose [19]. The signal value was calculated as C = Istructure – Ibackground (C = absolute contrast, I = average intensity). Random intensity variations were estimated by measuring the standard deviation of the measured background intensities.  (Fig1.)

Images of the inferior parts of the lower limbs were affected by motion artefacts that could be removed with "pixel shift" registration. However, image registration involves non-linear interpolations that alter noise distribution and distort its measurement. For this reason, SNR calculations were only performed in the abdominal, pelvic and femoral regions.

Q1: Which image is more detailed?

Q2: In which image are anatomic structures more discernible?

Statistical analysis of the visual comparison was done in several steps. Agreement between clinicians was determined. The level of agreement for each region was calculated as the mean of the percentage of the raters choosing kinetic imaging oved DSA for every individual image. Fleiss’ kappa tests were performed to obtain p values corresponding to the levels of agreement [21,22]. The 95% confidence intervals were also determined. Calculations were made using Stata 15.0 statistical data analysis software (StataCorp, College Station, TX, USA).