Fig. 1: Bronchiectasis in the left inferior lobe, seen in cross-section (inside red...

Fig. 2: Bilateral bronchiectasis shown by bronchi with thickened walls and no...

Fig. 4: Large pneumonia consolidation of the right inferior lobe due to bacterial...

Fig. 5: Contrast-enhanced CT scan showing a large consolidation in the right lung, due...

Fig. 6: Bronchiectasis on the posterior segment of the right upper lobe, showing an...

Fig. 8: A mass is seen on the left upper lobe (red dotted perimeter), surrounded by...

Fig. 9: A ground-glass opacity surrounded by a thick circular consolidation is seen at...

Fig. 11: Large consolidation of the right inferior lobe, with expansion of the oblique...

Fig. 14: Fibrotic and cystic parenchymal changes in both upper lobes (inside red...

Fig. 19: Presence of an empyema on the left lung, with a liquid component spreading the...

We carried out a literature review of classic signs in thoracic radiology, using 19 real examples from the archive at Centro Hospitalar de São João, identifying the respective clinical context and the matching imaging findings.

One of the most common and basic signs of bronchiectasis in chest CT imaging is the “signet ring” sign (Fig. 1): a ring of soft-tissue attenuation (bronchial wall) surrounding a round lucent area (bronchial lumen with air in cross-section), with an adjacent smaller nodular structure, with soft-tissue attenuation (pulmonary artery branch). This is typical of bronchiectasis, particularly cylindrical-shaped ones. Whenever the lumen of a bronchus exceeds by more than half the lumen of the adjacent pulmonary artery (normal bronchovascular ratio is 1:1 or less), a “signet ring” sign is seen and bronchiectasis are most likely diagnosed. Visualization of this sign should promptly precipitate searching for other signs of bronchiectasis, like thickened bronchial walls, lack of bronchial tapering and visible bronchioli within 1 cm of the pleura. 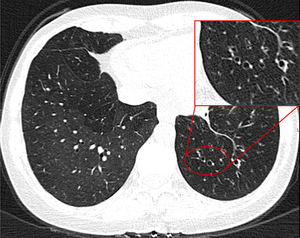 Another classical sign of bronchiectasis – the “tram-track” sign (Fig. 2) – is seen when dilated bronchi are seen on a longitudinal plane, where parallel linear opacities (bronchial thickened walls) surround the air-containing lumen. This sign is seen in cylindrical-shaped bronchiectasis, in cases of bronchial obstruction, cystic fibrosis, infection or congenital defects like pulmonary sequestration. 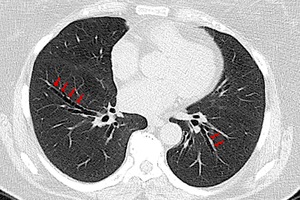 It is a non-specific finding in small airway disease, with many causes, including infection (bacterial, fungal or viral), bronchiolitis, cystic fibrosis, aspiration of foreign bodies, toxic fume inhalation, and immunologic and connective tissue disorders. 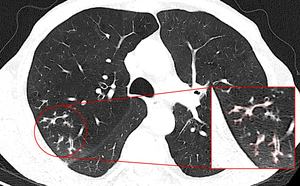 Fig. 3: Peripheral linear opacities in the right upper lobe associated with adjacent centrilobular micronodules (inside red circle; magnified inside red square), forming a “tree-in-bud” pattern. This case was due to bacterial infection, having resolved after antibiotic therapy.

In normal healthy patients, bronchi are not visible structures on CT scans, due to their air content. However, in the setting of parenchymal consolidation, their course may be discernible if their lumen remains patent. In this case, normal air is still flowing due to proximal airway patency, whereas the parenchyma itself is consolidated, thus producing the air bronchogram sign (Fig. 4), also seen in chest X-ray. 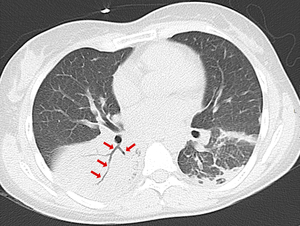 Somewhat analogous to the air bronchogram sign, the CT angiogram sign (Fig. 5) is seen in contrast-enhanced CT scans, where enhanced pulmonary vessels are patent within consolidated pulmonary parenchyma. Although not as frequent as the air bronchogram sign, it is classically identified in cases of pneumonia, but also in other entities such as lung adenocarcinoma, pulmonary edema, obstructive pneumonitis, lymphoma and metastatic cancer of gastrointestinal origin.

Mucus impaction inside bronchial structures conveys an image of lobular branching opacities, originating from the hilum and directed peripherally, surrounded by aerated lung, resembling gloved fingers (Fig. 6). This sign, seen both in X-ray films and CT scans, can develop both in obstructive and non-obstructive lung diseases, causing bronchiectasis with mucoid impaction within them, being more frequent in the upper lobes.

Any obstructive lesion can present this sign, so it can be found in cases of hamartomas, lipomas, lung adenocarcinoma, bronchial atresia, among others. Non-obstructive causes might include allergic bronchopulmonary aspergillosis (ABPA), mostly due to allergic reaction in asthmatic patients, and cystic fibrosis, where there is mucociliary dysfunction with thick mucous production. 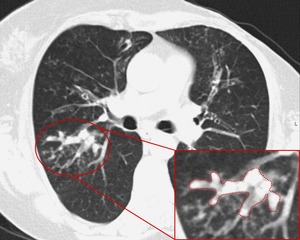 Fig. 6: Bronchiectasis on the posterior segment of the right upper lobe, showing an opaque lumen (inside red circle; magnified inside red rectangle) due to mucoid impaction, resembling fingers inside a glove – “finger-in-glove” sign.

Although it is not an actual sign, ground-glass opacification (GGO) identification is important due to being present in many classical signs of thoracic CT imaging. It is defined as a hazy and slightly hyper-attenuated area of lung parenchyma, where the bronchovascular architecture is preserved (Fig. 7). Interstitial thickening, small haemorrhage, partial airway filling, alveoli collapse or even normal expiration might cause GGO. Common causes include pulmonary edema or haemorrhage, acute respiratory distress syndrome (ARDS), viral or bacterial pneumonia, hypersensitivity pneumonia and other diffuse interstitial lung diseases. 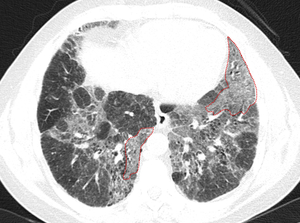 Fig. 7: Several areas of hazy and discreet hyper-attenuation (inside red dotted perimeters) – ground-glass opacities – in a patient with hypersensitivity pneumonia.

Whenever a nodule, mass or consolidation is surrounded by a ground-glass opacity, it resembles a halo, hence being called the halo sign (Fig. 8). A multitude of diseases may present this finding, emphasizing its non-specific characteristic. Its appearance is mostly related to pulmonary haemorrhage, but it can also be seen in various infectious diseases, inflammatory conditions and neoplasms. 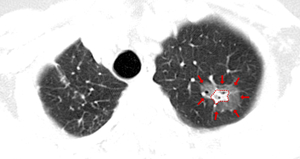 Fig. 8: A mass is seen on the left upper lobe (red dotted perimeter), surrounded by hazy ground-glass opacification halo (red arrows) – halo sign. The mass was due to an adenocarcinoma in situ lesion.

Although initially thought as highly specific of cryptogenic organizing pneumonia, it has also been reported in cases of pulmonary fungal infections such as paracoccidioidomycosis and lymphomatoid granulomatosis. Regarding COP, the central opacity represents an area of alveolar septal inflammation and cellular debris, and the opacified ring represents an area or organizing pneumonia. 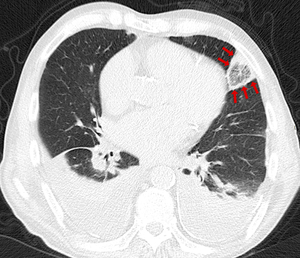 Fig. 9: A ground-glass opacity surrounded by a thick circular consolidation is seen at the lingula (red arrows) – reversed halo / atoll sign – in a patient with cryptogenic organizing pneumonia.

Subpleural masses can cause distortion of surrounding bronchovascular architecture, with appearance of curvilinear opacities (resembling a comet tail) which extend from the mass to the ipsilateral hilum (Fig. 10). This phenomenon is characteristically associated with pulmonary round atelectasis (Blesovsky syndrome), with findings of pleural thickening or effusion being also frequent. It is mostly found in the posterior aspect of lower lobes, although it can occur at any pulmonary location. The affected lobes usually present volume loss. 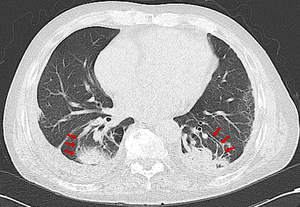 Fig. 10: Bilateral pleural effusion associated with two posterior subpleural masses, one on each inferior lobe. Several curvilinear opacities extending from both hila to the masses can be seen – “comet-tail” sign – indicating the presence of round atelectasis.

Other bacterial agents which might show a similar sign include tuberculosis, Spreptococcus pneumoniae, Pseudomonas aeruginosa, Haemophilus influenzae, lung abscess and adenocarcinoma in situ. 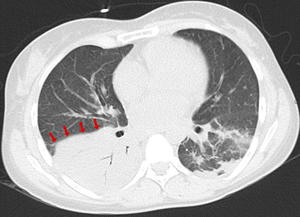 As the name says, this sign results from air accumulation, in a crescent shape, surrounding any mass lodged inside a pulmonary cavity (Fig. 12). Invasive pulmonary aspergillosis, particularly in immunocompromised and neutropenic patients, is the main etiology, although it can be seen in other entities which present cavities, such as neoplasms, lung abscesses and infections. Other less frequent causes are pulmonary gangrene, pulmonary hematoma, Rasmussen aneurysm in a tuberculous cavity, Wegener granulomatosis, and hydatid cyst with bronchial involvement.

This sign is often confused with the Monod sign, where a previous pulmonary cavity (old tuberculosis, sarcoidosis, neoplasm) is colonized by fungal agents like Aspergillus fumigatus, with formation of a fungus ball within it (aspergilloma/mycetoma), surrounded by air. However, fungus balls are mobile inside cavities, moving towards dependent locations, so CT acquisition with ventral decubitus should be performed whenever this suspicion is raised.

Fig. 12: Large cavity on the right lung apex (axial view: left; coronal view: right). Inside the cavity there is a necrotic lung mass, due to angioinvasive aspergillosis, surrounded by air in a crescent-shape (red arrows) – air crescent sign – indicating reabsorption of necrotic tissue by leucocyte activity.

On contrast-enhanced CT scans, identification of an artery leading to a nodule or mass implies a haematogenous origin of the lesion and constitutes the feeding vessel sign (Fig. 13). More than 70% of septic embolism cases present this sign, although it might be found in haemorrhagic nodules, pulmonary metastasis, pulmonary vasculitis or pulmonary infarction.

Lung parenchymal destruction with fibrotic tissue and the formation of resulting multiple cystic airspaces with thick fibrous walls can be found at late stages of many lung diseases, receiving the term “honeycomb” pattern (Fig. 14). Cystic changes vary in size from a few millimetres to several centimetres and their usual distribution is subpleural. This pattern is a hallmark of pulmonary fibrosis and is used as criterion for usual interstitial pneumonia. 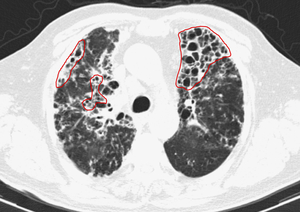 Fig. 14: Fibrotic and cystic parenchymal changes in both upper lobes (inside red perimeters), more pronounced on the left upper lobe – “honeycomb” pattern. This was a case of idiopathic pulmonary fibrosis. 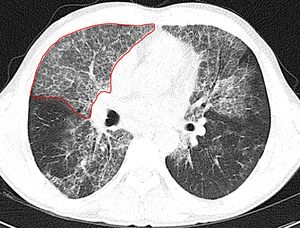 Described in sarcoidosis, this sign shows mass-like regions in lung parenchyma composed of clusters of smaller nodules, surrounded by satellite nodules, resembling a cluster galaxy (Fig. 16). This nodular pattern is more common in patients with more than 50 years of age at presentation. 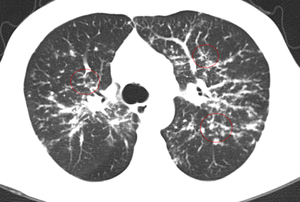 It is highly specific of hypersensitivity pneumonia, although it has been reported in cases of sarcoidosis and atypical infections with bronchiolitis. 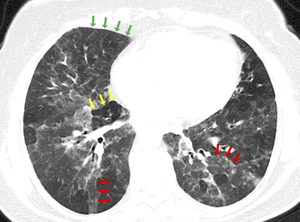 On contrast-enhanced CT scans, visualization a blood vessel in cross-section with a central filling defect and thin rim of contrast around it represents the “polo mint” sign (Fig. 18). It is highly suggestive of pulmonary thromboembolism with a central thrombus in the visualized vessel. When seen, other signs of thromboembolism should be sought.

Although initially described for pulmonary thrombus, this sign can be seen in any vessel, such as the superior vena cava or the portal vein. 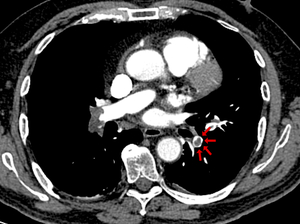 Fig. 18: Contrast-enhanced CT scan showing pulmonary thromboembolism on the left inferior lobe, with a central thrombus surrounded by a rim of contrast (red arrows) – “polo mint” sign (resembling a British breath mint with the same name). A large central thromboembolism can also be seen in the right main bronchus. 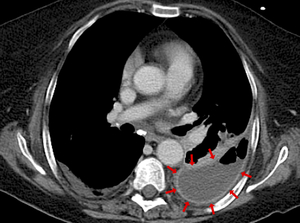