Fig. 1: Whole-LT in a case of hepatoblastoma.

Liver transplantation (LT) represents the treatment of choice in end-stage liver disease; the main indications [1, 5] are: 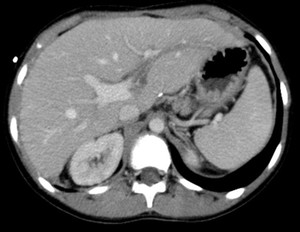 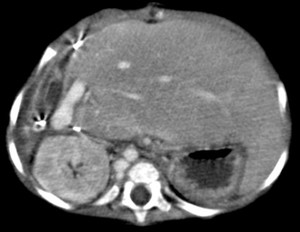 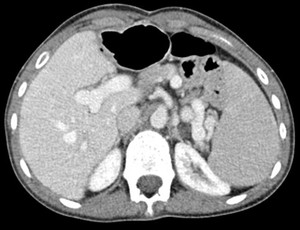 Vascular and biliary anastomoses are performed differently in case of whole-LT and reduced size-LT [4].

- the graft's hepatic artery is usually anastomosed in an end-to-end way to the recipient's;

- the main portal vein (MPV) anastomosis is also created in an end-to-end way;

- the inferior vena cava can be reconstructed end-to-end, both in the suprahepatic and the infrahepatic tract or through the piggyback technique, that implies the recipent's inferior vena cava sparing and subsequent anastomosis to the graft's hepatic veins;

- common bile duct anastomosis is usually performed through a duct-to-duct reconstruction, except in patients with biliary atresia, in whom a Roux-en-Y hepaticojejunostomy is necessary.

- in case of discrepancy in size between the graft's and the recipient's hepatic artery, arterial reconstruction is performed through a donor conduit from the infrarenal aorta;

- the hepatic venous anastomosis is performed through the piggyback technique, between the graft's left hepatic vein and the recipient's hepatic vein orifice;

- the biliary tree is reconstructed through a Roux-en-Y hepaticojejunostomy.

Post-operative complications are frequent after LT, in particular in pediatric patients, due to the different surgical techniques, used to increase the availiability of potential grafts  [1].

The early detection of these complications can lead to a prompt treatment, avoiding graft failure and subsequent retransplantation. Even if the most frequent complications are those of biliary origin, the vascular ones are the most dangerous for the survival of the graft [2, 4, 5].

We reviewed only complications that can be studied with radiological examinations.