Why nominate the mesentery as an organ?

The definition of an organ is vague, so that listing and classifying human organs is problematic. In one of the most accepted definitions, an organ is defined as an independent part of the body that carries a special function.

After the new anatomical and functional understanding of the mesentery, it was then suggested that it should be redesignated as an organ itself. The criteria observed for this designation were in short, its size, its continuity and distinct functions.

How does the mesentery meet the criteria to be designated as an organ and what are its distinct functions?

- Among its unique functions, its role in the intestinal suspension is highlighted, preventing the pelvic collapse of the intestines in the orthostatic position. Also, intestinal transit would probably be slowed or possibly even cease without these suspension and attachment functions. Mesenteric attachment facilitates suspension of the colon, allowing it to adopt the spiral conformation. Its suspension, as well, allows for intestinal motility and peristalsis.

- It plays an important role in body physiology, serving as a bridge for signals exchanged between the body and the intestine. It plays a role mediating local or systemic responses, either through the interaction of mesenteric lymph node chains or in the production of inflammatory factors. An important example is that the mesentery production of C-reactive protein is responsible for an important amount of the serum levels of this protein. C-reactive protein regulates glycemic and lipid metabolism. Data also suggest that mesenteric events contribute to the regulation of systemic fibrinolytic, inflammatory, and coagulation cascades.

- It is an indispensable structure in the embryological development of the other abdominal organs, since its development is closely related.

According to the concept of mesenteric continuity, the development of volvulus is no longer attributed to the presence of an anomalous mesentery, but to a mesenteric twist around the attachment areas. Thus, its treatment can be performed through the fixation of mesenteric regions. Recent data suggest that Crohn's disease would be a primary mesenteric disease. It has also been shown that the inclusion of mesenteric resection in the treatment of Crohn's disease reduces recurrence rates. The field of colorectal surgery, especially in the oncological scope is also changing. The recent advances in our understanding of mesenteric anatomy and surgical terminology will facilitate the standardization process.

In the field of radiology, an anatomical-radiological review was done using data from the Visible Human Project to identify mesenteric regions. CT appearances were correlated with cadaveric and histological appearances at corresponding levels. The percentages of identification of each mesenteric anatomic region on the tomography were quantified, as well as the possibility of identification of the flexural contiguity. The anatomical limits on imaging were also defined. This enabled re-evaluation of CT images of the mesentery, in which contiguous flexural and non-flexural mesenteric regions were repeatedly identifiable. A mesenteric-based atlas of abdominal imaging was recently developed, using mainly vascular markers for the correct identification of the mesenteric regions. Thus, we have an updated anatomical and radiological version which radiologists can now use to better interpret, diagnose or stage intra-abdominal diseases.

The use of the new anatomic-radiological model goes beyond the didactic role and the possibility of a correct description of the mesenteric regions. From the best knowledge of the normality of the mesenteric anatomy, it is possible to perform an accurate study of the pathological processes, as well as the planning of surgical or interventional radiologic procedures.

For the first time, we fully understand the shape of the mesentery, and by understanding its shape, we can seek to elucidate its functions, physiology and role in diseases.

The mesentery in radiology

We can use vascular markings for better identification of the mesenteric regions. 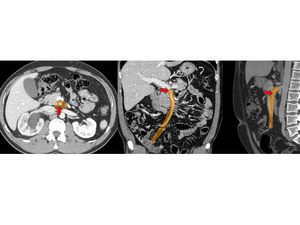 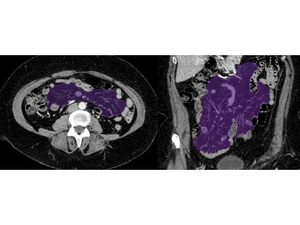 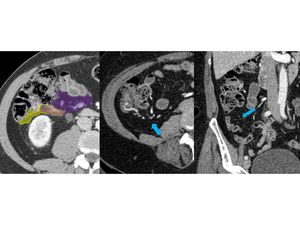 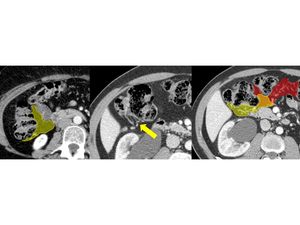 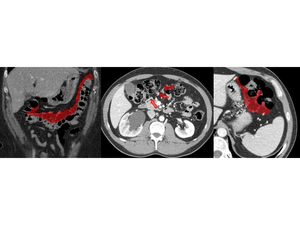 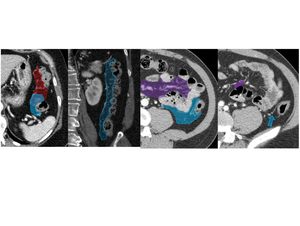 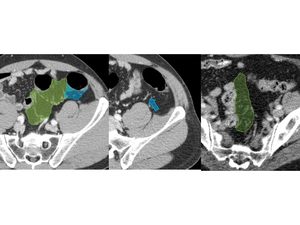 Fig. 8: Mesosigmoid (green) and its confluence with the left mesocolon (blue). The vascular markings (arrow). 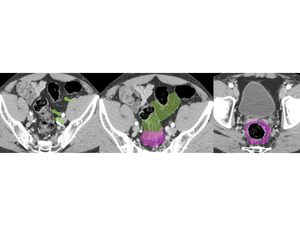 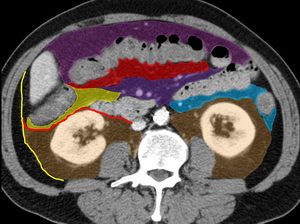 Fig. 10: Overview: 1) Yellow line: right lateral peritoneal fold; 2) Red line: Toldt’s fascia (also known as anterior pararenal fascia) - Told's fascia is difficult to visualize, unless thickened within a pathological context. It is more easily visualized in the region where it was previously known as the anterior pararenal fascia, but it must be remembered that it occurs in every region of contact between peritoneum and retroperitoneum (even if it is not seen on imaging); 3) Purple region: small bowel mesentery; 4) Red region: transverse mesocolon; 5) Pink region: greater omentum - The transverse mesocolon and colon overlie the small bowel mesentery, and the greater omentum overlies the upper surface of the transverse mesocolon. Extensive adhesions occur between the under surface of the greater omentum and the upper surface of the transverse mesocolon; 6) Yellow region: right mesocolon; 7) Blue region: left mesocolon; 8) Orange region: retroperitoneum.
Home | Browse posters | Help | Privacy policy | Disclamer | Contact | myESR
© 2003-2022 ESR - European Society of Radiology