Although recent data have revolutionized the concepts about the mesenteric anatomy, anatomical and embryologic books and publications continue to present classic anatomical descriptions. Thus, our focus will not be on the classical concepts: we will be addressing the proposed new concepts.

Recent data suggest a change in the formerly known anatomical model of mesentery, now proving its continuity and defending his new classification as an organ due to its uniqueness, function and role in disease.

The classic concept of mesenteric fragmentation was overcome: it was previously believed that the mesentery of the ascending and descending colon region (right and left mesocolon) did not exist in the adult due to regression or resorption mechanism. Today, it is known that the mesentery is a continuous structure from distal to the duodenojejunal flexure to the mesorectal level, including the normal presence of the right and left mesocolon.

Important concepts about the embryology of the mesentery:

Embryology – The classic concepts and the new model

The classic model of mesenteric embryology was based on the anatomical concept of mesenteric discontinuity. According to this model, the small bowel mesentery, as well as that of the transverse colon and sigmoid, persists into adulthood. However, the right and left mesocolon regress, which would make mesentery discontinuous and fragmented. Theories were developed to try explain right and left mesenteric involution, but none of them were widely accepted. Despite the mesenteric fragmentation theory, the start and end points for each mesenteric region have never been identified, which corroborates the lack of consistency of this observation. Nowadays we know such points do not exist, since the mesentery has been proven as a continuous structure.

Once mesenteric continuity has been proven, its anatomical structure in the adult is much simpler than previously thought. Although the new model simplifies its anatomy, the embryological development of the mesentery, peritoneal reflection and fascia needs to be systematically studied, as it no longer fit the previously described model.

Mesentery: Relatively little is known regarding the cellular events involved in mesenteric development. It is suggested that rotation, anchorage, elongation, and attachment are important and interrelated processes. The mesenteric embryology process can be simplified in a set of key processes:

It is important to define the terms “attachment” and “suspension.”

Peritoneum: The embryological development of peritoneal reflections is also little elucidated. It is suggested that the peritoneal reflection develops after the development and final positioning of the gastromesenteric complex and that it serves to secure the gastromesenteric complex in position. A secondary benefit is that it limits the spread of diseases.

Important concepts about the anatomy of the mesentery:

According to the classical anatomical model, mesentery would be a fragmented structure. It was previously considered to be a double layer of peritoneum that encloses the intestines and attaches them to the posterior abdominal wall. Its main fragments were:

Mesentery: The current concept is that it is a continuous structure from distal to the duodenojejunal flexure to the mesorectal level. However, it can be subdivided into the following regions for didactic purposes: 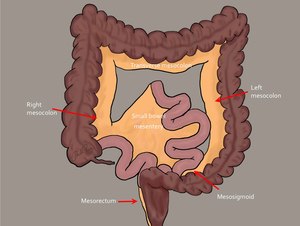 Toldt's fascia: Toldt’s fascia is the connective tissue layer that occurs between attached regions of mesentery and retroperitoneum (or pelvis). It occupies a potential space between the mesentery and retroperitoneum. The peritoneal reflection is the anatomic limit between this space and the fascia. Whenever two mesothelial surfaces come into direct and prolonged contact, Toldt’s fascia develops between and bridges both.