Fig. 1: Normal anatomy of the distal spinal canal and its content in a 7-day-old...

Fig. 2: Normal anatomy of the lumbar spinal canal and its content – axial ultrasound...

Fig. 3: Ultrasound image in B and M modes displaying the normal pulsatile movement or...

Fig. 4: Transient dilation of the central canal in a 14-day-old newborn. Sagittal...

Fig. 7: Pseudosinus tract in a 7-day-old newborn presenting with a dimple in the...

Fig. 8: Dysmorphic coccyx in a 3-day-old newborn with a skin dimple. Sagittal...

Indications for a spinal ultrasound study in newborns

All the conditions that may be associated with closed spinal dysraphism are indications for performing a spinal ultrasound study as a screening tool in newborns.

- Midline cutaneous stigmata of the back (sacral dimple, particularly if located further than 2,5 cm from the anus; hemangiomatous lesion; hairy patches; skin tags);

- Soft-tissue mass of the back;

Specifically at our institution, these exams are only performed in newborns whose obstetric ultrasound studies did not reveal significant changes, otherwise MRI is the chosen imaging study.

Spinal ultrasound study is performed in both sagittal and axial planes along the midline, with the newborn in prone position.

The spinal cord appears as a hypoechoic tubular structure with a hyperechoic center representing the central canal – the central echo complex. The caudal extremity of the spinal cord corresponds to the conus medullaris, whose tip is usually located in the level between L1 and L2 in healthy newborns. It should not lie below the L2-L3 disk space[1,4].

The conus medullaris continues into a hyperechoic cordlike structure, the filum terminale, which is surrounded by echogenic linear structures representing the roots of the cauda equina. The filum terminale thickness should not overcome 2 mm.

The normal spinal cord and cauda equina demonstrate pulsatile movements, which may be assessed with M-mode study[5](Fig. 3). 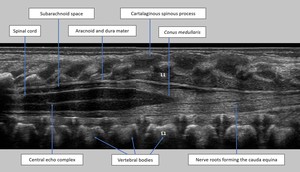 Fig. 1: Normal anatomy of the distal spinal canal and its content in a 7-day-old newborn - sagittal ultrasound image. The L1 vertebra is indicated. 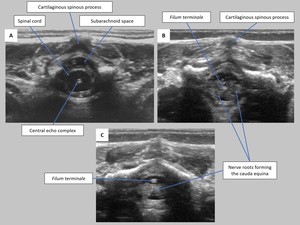 Normal variants are commonly found in spinal ultrasound studies. Its recognition is fundamental in order to prevent its misinterpretation as pathologic findings and unnecessary additional evaluations.

The spinal cord may present a slight dilation of the central canal during the first weeks of life after birth. This seems to be an incidental finding in healthy newborns[5].

Although some authors refer to both as synonymous, others distinguish these two entities[3,5]

Ventriculus Terminalis corresponds to a small distension of the distal lumbar central canal of the spinal cord, above the tip of the conus medullaris (Fig. 5). To be considered a simple variant, it should be smaller than 5 mm and stable over time. It results from an incomplete fetal regression of the embryonic terminal ventricle in the conus medullaris[3].

Filar Cyst refers to a well-defined and fusiform cystic structure located in midline, within the filum terminale, immediately below the conus medullaris (Fig. 6). Two principal hypotheses explain its origin. One is that it may be a pseudocystlike structure resulting from the normal arachnoid reflections. The other one is that it is a true cystic embryonic remnant[3].

Pseudosinus tract is a common normal variant found in spinal ultrasound studies. It is characterized by a residual cord of fibrous tissue extending from the coccyx to the base of a skin dimple. In ultrasound imaging it is seen as a hypoechoic cordlike structure arising from the tip of the coccyx[3] (Fig. 7).

The shape and angulation of the coccyx are quite variable. In some cases, its tip is angulated in a way that simulates a palpable mass during the physical examination[3].

Tethered spinal cord may be associated with both open and closed spinal dysraphisms, and results from incomplete regressive differentiation and failed involution of the terminal cord. The filum terminale and the nerve roots are abnormally anchored, leading to the dorsal fixation of the spinal cord[4].

- The conus medullaris is in a low-position, below the L2-L3 disk space;

- The spinal cord and nerve roots show lack of movement in M-mode scanning[5].

Fatty filum or filar lipomas result from a minor anomaly in secondary neurulation, leading to persistence of dedifferentiated fatty tissue within the filum terminale[4]. Fatty filum may be considered a normal variant if it is an isolated finding in a filum with normal thickness (2 mm or less). It is seen as an increase of echogenicity within the filum (Fig. 9).

When associated with other anomalies, such as tethered spinal cord, constitutes a pathologic finding.

Lipomyelocele and lipomyelomeningocele result from a failure in primary neurulation whereby mesenchymal tissue fills the neural tube and differentiates into fat[2,5]. They occur predominantly in the lumbosacral region.

At clinical examination, a subcutaneous fatty mass above the intergluteal crease is seen.

This type of lipoma is located within the dural sac, along the dorsal midline. They are more frequent in the lumbosacral region and often associated with tethered spinal cord.

Dermal sinus is caused by an incomplete disjunction between the superficial and the neural ectoderm at a focal point[5].

It consists of an epithelial lined tract that connects neural tissue or meninges to the skin surface, most frequently located in the lumbosacral region.

At physical examination, it manifests as a midline dimple, often associated with other cutaneous findings (hairy nevus, hyperpigmented area or capillary hemangioma)[2].

Sonography may depict a hypoechoic tract extending from the spinal cord to the skin (Fig. 10).

In this closed spinal dysraphism, there is a herniation of spinal meninges (dura and arachnoid mater) through a vertebral defect. The hernial sac only contains cerebrospinal fluid.

At physical examination, patients usually present with cutaneous stigmata on the back.

Ultrasound imaging in the axial plane demonstrate the presence of two hemicords[5].

Caudal regression syndrome represents a spectrum of anomalies of the caudal region, ranging from isolated partial agenesis of the coccyx to lumbosacral agenesis[4].

These two conditions may result from changes in cerebrospinal fluid circulation or consist in variants of dysraphic malformations[5].

Isolated vertebral posterior arch fusion defects are a mild form of closed spinal dysraphism, consisting of unfused spinous processes, laminae or both. This condition is relatively frequent and commonly seen as an incidental finding, although it may be associated with a tethered spinal cord. Transitional levels of the spine, particularly the L5 and S1 segments, are most commonly involved[6].