Fig. 6: NECT at three different levels of the brain demonstrate a hypodense midbrain...

Fig. 7: NECT at three different levels of the brain show no hypoattenuation in the... 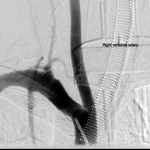 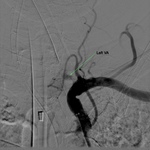 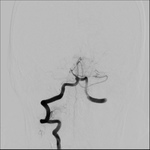 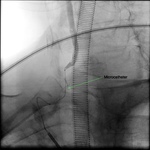 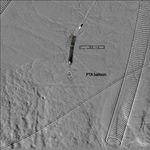 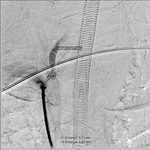 Fig. 17: DSA acquisition of right VA following PTA with stenting at ostial level in a 71... 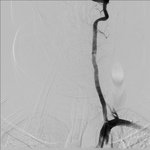 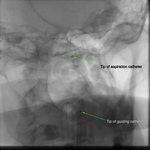 Fig. 21: Angiographic runs to ensure microcatheter tip is past occlusion site for... 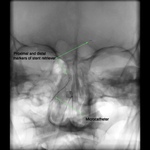 Fig. 22: Fluoroscopy view of stent retriever deployed inside the BA, compare to figures... 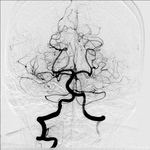 Fig. 23: Antegrade reperfusion of more than 50% of the previously occluded vessels....

A total of five patients with CTA confirmed posterior circulation stroke and proximal vertebral artery lesion addressed our centre in the past 24 months.

Onset to presentations time was beyond 4,5 hours but less than 24 hours in all cases, exact symptom onset time being unidentifiable in two patients having suffered a “wake-up stroke”.

IV thrombolysis was not initiated in this patient series.

All of the patients in this series were admitted with a moderate/ moderate to severe stroke, NIHSS ranging from 6 to 19. (Table 4)

Ischaemic changes on the initial NECT were visible in one patient, with a pc-ASPECTS of 8 (Fig. 6 and 7). There was no evidence of a hyperdense basilar artery.

CTA was performed to determine occlusion sites in all patients. (Fig. 8)

Patients were all under general anaesthesia.

First, a diagnostic cerebral angiogram to confirm lesions was performed in all patients.

One patient could not undergo EVT due to impossible catheterisation of either VAs.

Out of the four patients who underwent EVT, three had V1 segment stenoses ranging from 70% to complete occlusion combined with basilar artery or branches occlusion on DSA (Fig. 9 to 13).

Three patients were treated using the antegrade (AG) approach. Balloon angioplasty followed by stenting of the extracranial VA was performed in two patients. (Fig. 14 to 18)

BA access was obtained via the stenotic/occluded VA (“dirty-road") in three patients. (Table 6)

An intracranial distal access sheath (6F) was placed in one of the VAs for support. Coaxial navigation proximal to thrombus with a reperfusion catheter and microcatheter was followed by negative pressure aspiration sessions using high flow aspiration tubing and pump system (Fig. 19).

Mechanical thrombectomy was performed in one patient using the reverse revascularization technique.

A 6F distal access sheath was placed in the right VA for support. A microcatheter was navigated through the BA distal to the thrombus, angiographic runs were used to ensure microcatheter tip past occlusion site (Fig. 21). A stent retriever was then deployed by slowly pulling back the microcatheter (Fig. 22).

After a period of 5 minutes, during which thrombus incorporation into the stent retriever took place, the device was pulled back into the distal access sheath using manual aspiration in order to eliminate all potential emboli.

Mean puncture to recanalization time was 102 minutes, with mTICI scores of 2b/3, meaning antegrade reperfusion of more than 50% of the previously occluded ischaemic artery territory (Table 7).

There were no procedure related complications. Vascular closure devices were used in all cases.

Only one of the four patients in this series survived, mRS = 1 at discharge.