MRI OF THE KNEE: normal and abnormal findings

The main non-osseous pathologies of the knee are explained by showing their correlation with the findings of the images.

The knee to explore is placed in the middle of the antenna in the extended position to optimize the study of the anterior cruciate ligament (ACL).

The typical parameters include a field of view of 14 -16cm, and a section thickness of 3–4mm.

The sequences includes in our standard protocol are:

The knee is composed for multiple structures, each with its own directional and spatial features. The reading of MRI is better when these structures are analysed individually and with a particular order.

Our proposal for a systematic reading is:

The knee menisci are interposed between the articular surfaces of the distal femur and the proximal tibia.

Can be subdivided into the anterior horn, body and posterior horn.

On coronal images, the menisci appear either triangular or wedge-shaped, depending on whether the imaging plane is through the body or horn, respectively.

• Discoid meniscus: It is an abnormally wide body and is seen in 3% -5% of the knees, being most common in the lateral meniscus with a ratio of 10-20:1.

Is diagnosed when the body of the meniscus measures 15mm or more on a midline coronal image, or in the sagittal plane, the meniscus is seen with a continuous connection between the anterior and posterior horns, in more than three consecutive images (usually, the body of the LM is only seen on two adjacent sagittal slices).

Normal anatomic structures that can mimic a tear include the:

The prevalence of meniscal tears are associated with degenerative joint disease. Are more common in the posterior horn of MM, however, in younger patients with an acute injury, LM tears are more common.

Normal menisci have low signal intensity at MR imaging; however, globular or linear increased intrameniscal signal intensity can be seen in children (because of normal vascularity), in adults with internal mucinous degeneration, and after trauma due to acute contusion.

Criteria for diagnosing a tear include:

- Meniscal distortion in the absence of prior surgery.

In contrast, the increase in intrasubstance signal intensity without extension to the articular surface is often not associated with a rupture in surgery and generally does not progress to a break.

a) Horizontal Tear: It is the most common type. It runs parallel to the tibial plateau and extends to the periphery, dividing the meniscus into superior and inferior halves.

It usually occurs in patients older than 40 years without previous trauma and is more common in degenerative joint disease.

b) Longitudinal Tear: Run perpendicular to the tibial plateau and divide the meniscus into central and peripheral halves.

Often occur in younger patients after significant knee trauma and are more frequent in posterior horns.

The typical appearance is a vertically oriented line that contacts one or both articular surfaces.

c) Radial Tear: Extends from the inner free edge of the meniscus and runs perpendicular to the long axis of the meniscus. Commonly involve the posterior horn of the MM or the junction of the anterior horn and body of the LM.

On axial MR images, these tears appear as clefts oriented perpendicular to the free edge.

d) Complex Tear: includes a combination of radial, horizontal, and longitudinal components (any two or all three). It is generally defined as unstable.

- Fragment within the intercondylar notch.

It is defined as unstable.

These signs are MRI findings that can accompany meniscal tears.

Most meniscal cysts contain septations and present a lobulated appearance. 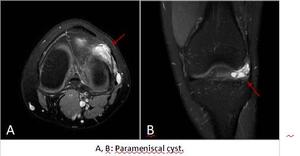 • Meniscal Extrusion: It is present when the peripheral margin of the meniscus extends 3mm or more beyond the edge of the tibial plateau.

• Subchondral Marrow Edema: Linear subchondral bone marrow edema is a superficial edema that is adjacent to the meniscal attachment site, parallels the articular surface, and is less than 5mm deep.

It is the frequently injured knee ligament. Originates from posterior medial surface of the lateral femoral condyle and runs parallel to the roof of the intercondylar notch and inserts on medial and anterior aspect of the tibial plateau. Forms an approximately 45º angle to the long axis of the tibia and has a straight inferior margin.

Intact ACL has hypointense signal on all MR sequences but may contain some high signal within it, especially at its insertion on the tibia, also it may contain high signal if there is mucoid degeneration within it.

Most ACL tears involve the middle substance of the ligament (90%).

Specific signs of ACL injury include: 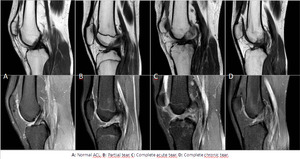 Originates from the anterolateral aspect of the medial femoral condyle and inserts over the back of tibial plateau.

It is much thicker than ACL, being a complete interruption of the LCP less common and associated with severe injuries.

On MRI the normal PCL appears as a well-defined band of very low signal intensity that courses between the medial femoral condyle and the posterior tibia.

PCL rupture is easily identified and we can see this signs:

A partial tear or intrasubstance injury are much more common and manifest as T2 or STIR intra substance hyperintensity with often laxity and thickening of the ligament, or has some fibers that appear intact and some that appear discontinuous. 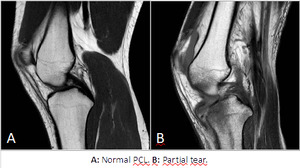 Three grades of MCL injury have been described: 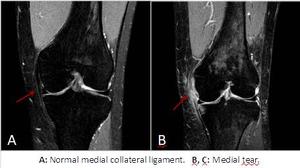 Originates from external tuberosity of the lateral condyle of femur anterior to the origin lateral head of the gastrocnemius muscle.

Most ruptures occur at the tendon-osseous junction at the superior pole of the patella. Other potential areas of rupture include the muscle belly, the musculotendinous junction, and the tendon itself.

Transection of all layers is diagnostic of a complete tendon rupture and may be associated with a mass of edematous tissue and haemorrhage that manifests as an area of increased signal intensity on T2- weighted images. The position of the patella may be a helpful secondary finding.

It is a less common cause of extensor mechanism dysfunction.

The absence of distinct margins and increased signal intensity on T2-weighted images within the tendon, allow confirmation of acute inflammation.

Haemorrhage and edema may extend to the region of the Hoffa fat pad. 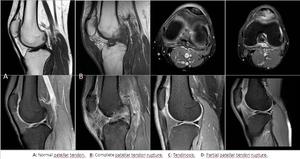 Chondromalacia patellae refers to softening and degeneration of the articular hyaline cartilage of the patella. Tends to occur in young adults and there is a recognised female predilection.

This is the classification of patellar cartilage for the diagnosis:

There are several well-defined fat pads within the knee joint, interposed between the joint capsule and the joint cavity with synovial lining, and therefore intracapsular but extrasinovial.

The three anterior fat pads include:

The infrapatellar fat pad of Hoffa is bordered by the inferior pole of the patella (superiorly), the joint capsule and patellar tendon (anteriorly), the proximal tibia and deep infrapatellar bursa (inferiorly), and the synovium-lined joint cavity (posteriorly). The transverse (geniculate) ligament courses within the posterior aspect of the fat pad.

• Hoffa disease: is a syndrome of impingement. Acute or repetitive trauma causes hemorrhage. The inflamed fat pad then becomes hypertrophied, which predisposes it to crushing or impingement between the femur and tibia and to further injury and inflammation.

Fat pad impingement may also occur in the absence of prior injury (Hoffa syndrome).

In the subacute and chronic phases, fibrin and hemosiderin have low signal intensity on both T1 and T2-weighted MRI.

Also, this fat pad may be involved secondarily from extrinsic processes, including: articular disorders, synovial abnormalities and anterior extracapsular abnormalities.

Bursae around the knee are numerous and act to reduce friction between adjacent moving structures. They are synovium-lined structures, usually collapsed but often containing a small amount of synovial fluid.

Inflammation from local and systemic processes (overuse, trauma, infection, haemorrhage, internal joint derangement, inflammatory arthropathy, and collagen vascular disease), may cause thickening of the synovial lining and accumulation of fluid within the bursa, allowing visualization on MRI.

On MRI, bursae appear as fluid collections with low signal on T1-weighted images and high signal on T2-weighted images. In chronic cases, the signal may be heterogeneous, and complicated by haemorrhage and calcification.

Popliteal cysts are not true cysts and represent the semimembranosus-medial gastrocnemius bursa. They are the most frequently encountered cystic masses around the knee. Their incidence on MRI reported in the literature ranges from 4.7% to 19%.

Popliteal cysts have been associated with various intra-articular disorders such as inflammatory and degenerative arthritis, meniscal or ACL tears, infectious arthritis, lymphoma, and sarcoidosis.

It is located anteriorly between the patella and the subcutaneous tissues adjacent to the proximal patellar tendon.

It is located between the tibial tubercle and the overlying skin.

It is located between the posterior margin of the distal patellar tendon and the proximal tibia, beneath Hoffa's fat pad.

It is located along the medial aspect of the tibia separating the pes anserinus from the tibial insertion of the medial collateral ligament and the bony surface of the medial tibial condyle.

It is located along the middle third of the medial aspect of the knee between the superficial and deep layers of the MCL.

It is located between the semimembranosus tendon and the MCL.

It is located between the distal part of the iliotibial band and the adjacent tibial surface.

It is located superficially to the distal lateral collateral ligament and deep in the anterior arm of the long head of the biceps femoris muscle as it crosses the LCL.

Arise from the joint capsule, ligaments, bursae, tendon sheaths, or subchondral bone, perhaps from synovial herniation or tissue degeneration. They usually are associated with the cruciate ligaments and may be multiocular or lobulated. Are not associated with meniscal tears.

Often associated with osteoarthritis. On MRI, are multiple, segmental in distribution, and present with surrounding sclerosis. An adjacent abnormal joint is usually associated.