Uterine leiomyomas subtypes and their imaging mimics: how to make a differential diagnosis. 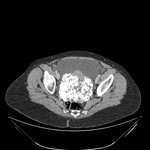 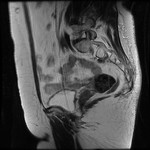 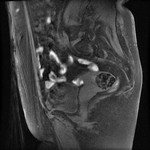 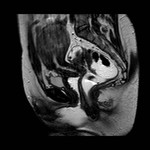 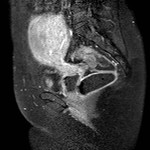 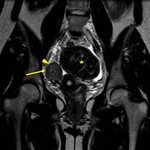 Magnetic resonance (MR) is the most accurate imaging technique for detection and localization of leiomyomas due to its excellent capability to demonstrate the uterine zonal anatomy that enables accurate classification of individual masses as submucosal, intramural, or subserosal.

Cystic degeneration is observed in about 4% of leiomyomas that develop cystic spaces that appear as round, well-demarcated areas that shows high signal intensity on T2-weighted images with no enhancement. ( Fig. 3 and Fig. 4 ).

This type of degeneration is important because it may also be seen in leiomyosarcomas and other malignant tumors. If an extensive myxoid change is seen, it may be diagnosed as myxoid leiomyoma.

Calcification is usually dense and amorphous. This pattern of calcification at plain radiography almost exclusively indicates the diagnosis of leiomyoma and can be confirm in Computed Tomography ( Fig. 5 ). MRI shows low signal intensity on T2-weighted images, and complete absence of enhancement in T1- weighted MR with contrast. ( Fig. 6 and Fig. 7 ).

The differential diagnosis includes non-myometrial lesions such as focal adenomyosis /adenomyoma and polyps. Benign ovarian tumors such as fibroma/thecoma as well as malign tumors such us uterine leiomyosarcoma.

Its important to adequately characterize the lesion within the uterus, to know the relationship of the lesion to the adjacent pelvic organs and structures, to identify the ovaries and uterus, and to evaluate the lesion in the patient's clinical context to avoid image pitfalls.