Tectorial membrane injury in the acute trauma setting: examining disparities between the adult and paediatric populations

The tectorial membrane (TM) serves as one of the major stabilizing ligaments of the craniocervical junction (CCJ) (1). The TM is a 1 mm thick, superiorly directed extension of the posterior longitudinal ligament (PLL) located ventral to the spinal cord.

Posterior to the dens and other CCJ ligaments, the TM fans out laterally and the cranial end attaches to the posterior clivus before incorporating with the intracranial dura mater. 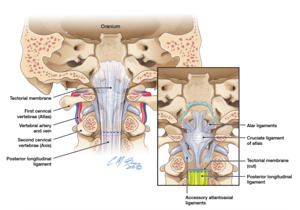 Cadaveric studies have found the TM is firmly adherent to the skull base and C2 body, forming a ‘sling’ posterior to the dens (2). Histologically, the TM consists of parallel collagen fibers with spindle‐shaped fibrocytes. Its cranial attachment contains an increased percentage of elastic fibers. 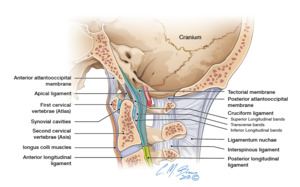 Injury to the TM may be caused by massive force on the body directed posteriorly (such as that imparted by a seatbelt in a high speed MVA) causing subsequent hyperflexion with anterior translation of the cranium at the CCJ. A massive force on the body directed anteriorly (such as that seen in an MVA in which the passenger was rear-ended or in a rear facing car seat) may conversely cause a hyperextension whiplash-type injury to the TM. The pattern of TM injury appears to differ significantly between the paediatric and adult populations. Retroclival epidural hemorrhage is commonly seen in paediatric trauma patients when the TM is stripped away from the clivus. Adult trauma patients, however, typically suffer full thickness tears of the TM. The aim of this study is to investigate the various tectorial membrane (TM) injuries that occur in the adult and paediatric populations with regard to their treatment, prognosis, pathophysiology, and imaging characteristics.