Fig. 12: Osseous erosions and remodelling at skull base in IIH

Fig. 17: Increased curvature of the tentorium cerebelli in IIH

Fig. 21: Enhancement of the pachymeninges in SIH

Fig. 23: Engorgement of the venous structures in SIH

Fig. 26: Other imaging findings related to sagging brain in SIH

Fig. 30: Other spinal findings in SIH

Neuroimaging in IIH has traditionally performed to exclude other causes of elevated ICP, such as space-occupying mass lesion and venous sinus thrombosis. However, it has become clear that a variety of imaging findings involving the orbit, skull base, brain and transverse sinuses are commonly found in patients with IIH. Hence, latest diagnostic scheme for IIH incorporates imaging findings as criteria for a diagnosis of "possible IIH" when papilledema is absent. 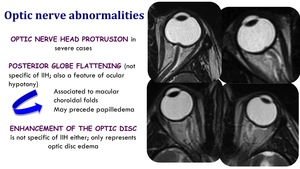 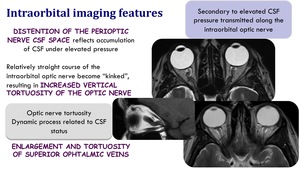 Osseous erosions and remodelling at skull base

Each milimeter increase in bony optic canal size associated with a 0.50 dB decrease in Humphrey visual field mean deviationm and with grade 4-5 papilledema or optic atrophy. 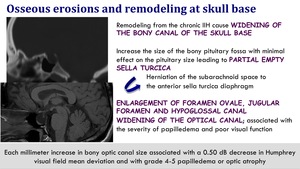 Fig. 12: Osseous erosions and remodelling at skull base in IIH

Pachymeningeal enhancement and sagging of the brain is uncommon. 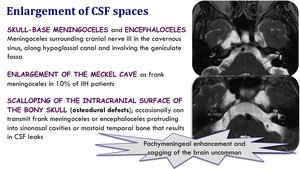 "Peglike" morphology to the cerebellar tonsils and CSF flow abnormality at the foramen magnum that appears identical to Chiari I malformation.

It is a dynamic process pushing the tonsils down because of the increased ICP. 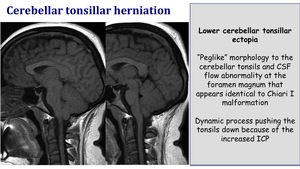 Most patients with IIH have anatomical abnormalities of the cerebral venous system.

Stenosis of the dominant or both transverse sinuses that affects the lateral margins of the sinuses:

Degree of stenosis does not correlate with ICP or visual loss.

Elevated venous sinus pressure in the setting of stenosis may impair CSF drainage at the arachnoid granulation tissue exacerbating a cycle of intracranial hypertension. 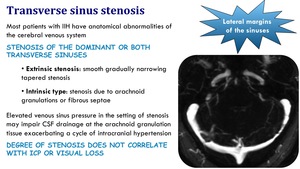 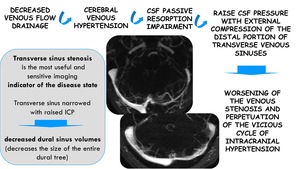 Increased curvature of the tentorium cerebelli

Diffuse supratentorial mass effect, probably mediated through a broad-based change in brain volume, would be more likely to exert a deflection on the entire span of the tentorium rather than on a focal identation along a segment of the transverse sinus.

Broad-based mass effect would produce the "suspension bridge" configuration or hammock-like span of the tentorium. 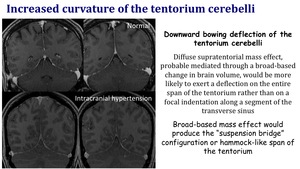 Fig. 17: Increased curvature of the tentorium cerebelli in IIH

There is a relationship between presence of arachnoid granulations and IIH.

Arachnoid granulations seem to act in a compensatory mechanism in patients with IIH.

Patients with IIH have more arachnoid granulations than general population.

They are inversely associated with imaging findings of IIH and play a role in homeostasis and hence in the pathogenesis of IIH. 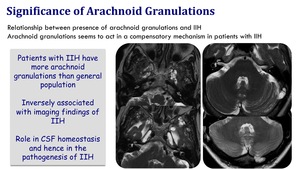 Brain MRI may be normal in 20% of patients with SIH. 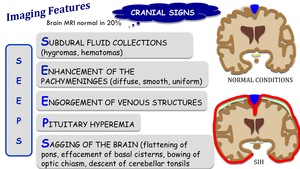 There may be a progression of findings: 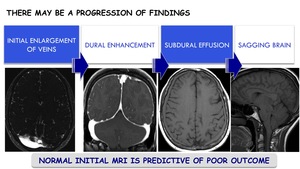 It is one of the most common and suggestive signs.

Results from continued vascular engorgement and transudation of intravascular fluid into the subdural space. 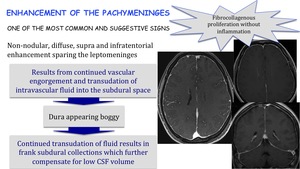 Fig. 21: Enhancement of the pachymeninges in SIH

May be simple or hemorrhagic, often bilaterally.

Subdural fluid collections are thin on the cerebral convexities and posterior fossa with no mass effect.

Subdural hematomas are secondary to rupture of bridging veins and have varying degress of mass effect. 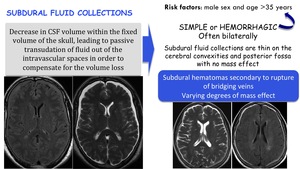 Engorgement of the venous structures:

Venous distention sign: produced by dilatation of the intracranial venous sinuses. It is a specific sign of decreased intracranial volume. 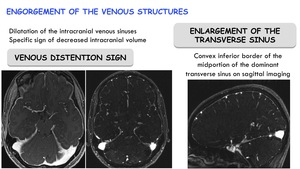 Fig. 23: Engorgement of the venous structures in SIH

Leading to enlargement to a height of 8-11 mm.

Can be mistaken for an adenoma.

It has a domed appearance with the descended and flattened optic chiasm draped on it. 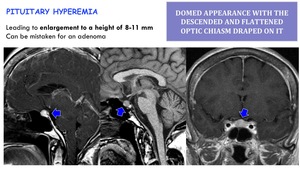 Sagging of the brain:

Out of proportion to the subdural hygroma collection.

Loss of buoyancy in the intracranial compartment

Descent of the brainstem

Down sloping the third ventricular floor, descent of the mamillary bodies and obliteration of basal cisterns 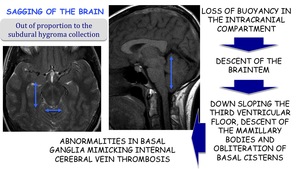 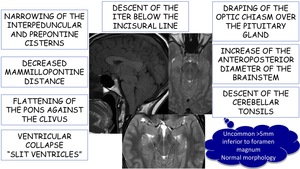 Fig. 26: Other imaging findings related to sagging brain in SIH 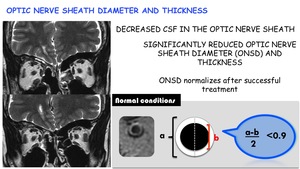 Epidural collections associated with nerve sleeve leaks may be of variable size (some produce high-flow leaks and others quite subtle leaks).

CSF venous fistula do not result in pooling of fluid in the epidural space; difficult to detect.

Demonstration of epidural leakage of CSF confirms diagnosis and may direct treatment efforts. 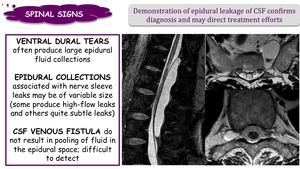 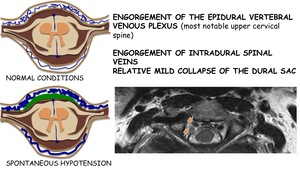 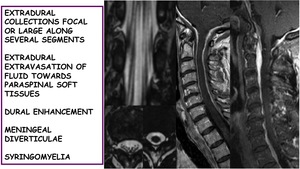 Fig. 30: Other spinal findings in SIH

They are a false-localizing sign observed in a large number of cases of SIH.

Not represent site of CSF leakage and reveals: 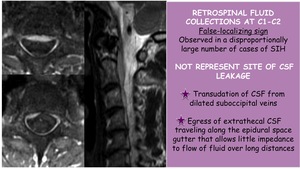 Looking for the CSF leak....

Both CT myelography and MRI (conventional and heavily T2WI) are capable of identifying large leaks when epidural fluid is abundant.