Idiopathic intracranial hypertension (IIH) is characterized by raised ICP of unknown cause. It is rare but important disease associated with significant morbidity, including permanent vissual loss in up to 25% of cases.

Incidence of IIH is steadily increasing (1-2 per 100.000 population). Females are more affected than males (tipically affecting young women of childbearing age). Children as young as 4 months can be affected with equal sex distribution.

IIH has been associated with conditions related to increased intra-abdominal, visceral fat and elevated body mass index (BMI), such as elevated leves of asipose tissue-derived retinol binding protein, polycystic ovarian disease in womeen and androgen deficiency in men. BMI has a linear relationship with CSF pressure.

Raised ICP is a uniform characteristic, but underlying pathogenesis of IIH is uncertain. 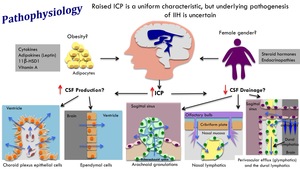 Aquaporin 1 channels are predominantely in the choroid plexus, can be upregulated by retinoids and glucocorticoids, and affected by medications used to treat IIH. 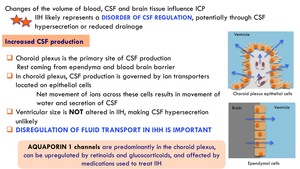 CSF drains: 1) from the subarachnoid space into the superior sagittal sinus, 2) through cranial nerves and cribiform plate into lymphatics

Newly named "glymphatic pathway" suggests an exchange in fluid between the CSF in the subarachnoid space and the interstitial fluid in the brain along paravascular routes.

Reduction in CSF absorption by arachnoid granulations may be attributed to increase in CSF outflow resistance or reduction in pressure gradient between the subarachnoid space and the superior sagittal sinus. 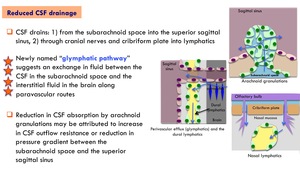 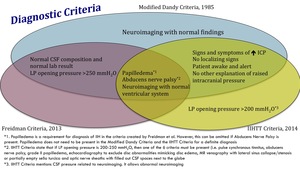 Polycystic ovarian syndrome (PCOS) is a chronic endocrine condition characterized by menstrual irregularities, ovarian dysfunction, hyperandrogenis, and hirsutism. Prevalence of PCOS in women with IIH is reported to be as high as 39-57% (7-18% in general population). Similar to IIH, PCOS is a disorder of women of childbearing age, associated with obesity, high serum leptin levels and low-grade inflammation.

Metabolic syndrome is a collection of risk factors including abdominal obesity, insulin resistance, circulating hypertriglyceridemia and hypertension that combined increased the risk of developing type II diabetes mellitus, cardiovascular and cerebrovascular disease. Obese phenotype of patients with IIH suggests that these patients may be at risk of metabolic syndrome.

Acetazolamide is considered the first-lines medication for the treatment of IIH. It inhibits carbonic anhydrase in the choroid plexus to decreased CSF production, and thereby, reduces ICP.

Reducing ICP has led to resolution of stenosis in some patients, suggesting that stenosis are a result of raised ICP externally deforming the venous sinuses, and not a primarily cause. 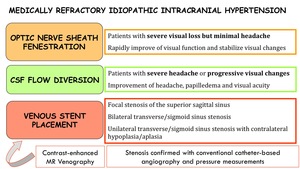 Affects women twice as frequently as men (female/male ratio of 3:2). Typically presents in the fourth or fifth decade of life, but children and elderly can also be affected.

For patients with SIH, underlying CSF leak should be looked in the spine and NOT at the skull base. 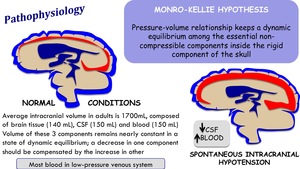 Spontaneous CSF leakage has been reported mostly as ocurring at the cervicothoracic and thoracolumbar junction of the spine. 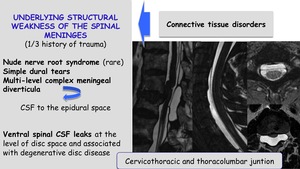 The presence or at least one of the following:

No recent history of dural puncture

Not attributable to another disease 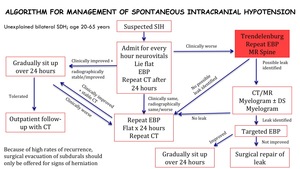