Fig. 25: Elderly male who is a known case of carcinoma head of pancreas. Sagittal T2 Wi...

In this presentation, CECT images of a 53 year old lady who is a known case of Neurofibromatosis with complaints of abdominal distension and on imaging found to have gross ascites and bilateral adnexal lesions are used for demonstration of anatomy of peritoneal spaces and reflections. Other cases for illustration of various pathological processes involving peritoneum with emphasis on route of spread will follow after review of anatomy. 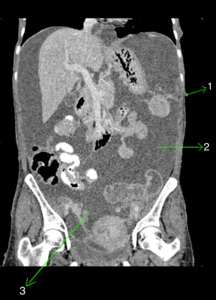 Include the triangular and falciform ligaments. 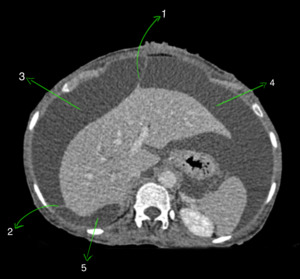 Outline the bare area of liver. The left triangular ligament is formed by fusion of inferior and superior reflections of left coronary ligaments. It is short and does not compartmentalize the left subphrenic space.

The right triangular ligament is formed by fusion of superior and inferior reflections of the right coronary ligament. It is long and separates the right subphrenic space from the right subhepatic space.

Peritoneal Ligaments of the Stomach

Remnant of the dorsal portion of ventral mesentery. The gastrohepatic and hepatoduodenal ligaments form the lesser omentum. The gastrohepatic ligament attaches the lesser curvature of stomach to the liver and contains the coronary vein and left gastric artery. The hepatoduodenal ligament attaches the duodenum to liver and contains the portal vein, hepatic artery, common hepatic ducts and part of cystic duct. It acts as route of spread of pancreatic disease to the porta hepatis and liver. 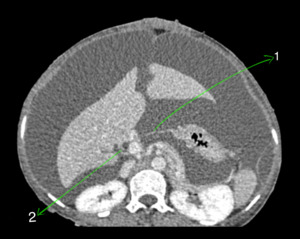 The ventral part of dorsal mesentery extends between the greater curve of stomach and the spleen. It contains the short gastric vessels and a collateral route of venous flow after splenic vein thrombosis. It acts as a frequent route for subperitoneal spread of pancreatitis-related fluid, especially from peripheral body and tail of pancreas. Fluid within the gastrosplenic ligament is often mistaken for a lesser sac collection, but do not communicate with the peritoneal cavity. 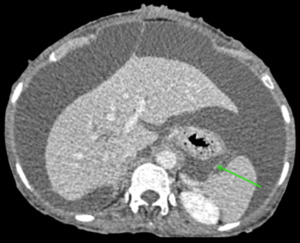 It is also called the gastrocolic ligament. The greater omentum may become visible if it is diseased or if ascites is present. It is used to surgically move radiosensitive bowel out of a pelvic radiation field. 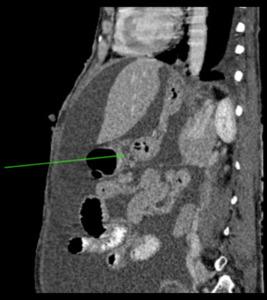 It is formed from the most dorsal aspect of dorsal mesentery. It contains the pancreatic tail and splenorenal collateral vessels in patients with portal hypertension. 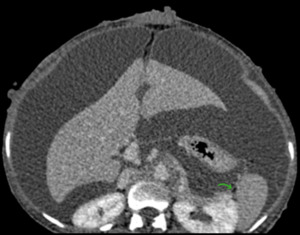 Transverse mesocolon is the peritoneal fold that attaches the transverse colon to the retroperitoneum. It contains the middle colic vessels. In patients with pancreatic head cancer, it is an important possible source of local extension. Because of its numerous vessels, vascular control is difficult and extension into mesocolon renders pancreatic cancer inoperable. The transverse mesocolon also may be a route for internal herniation after retrocolic Roux-en-Y gastric bypass surgery. Gastric ulcers may involve transverse mesocolon to create Gastrocolic fistulas. 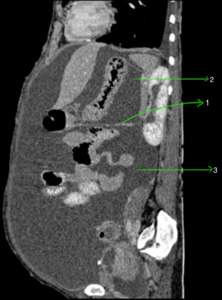 Small bowel mesentery attaches the small bowel to retroperitoneum. It extends from the ligament of Treitz to ileocecal valve. It contains the superior mesenteric vessels and their branches. Inflammation and tumor may involve the mesentery directly (eg, from the pancreatic body or jejunum) or by way of the neurovascular plexus or lymphatic channels that run within it.  Rotational and fusion anomalies of the mesentery may lead to volvulus or internal hernia. 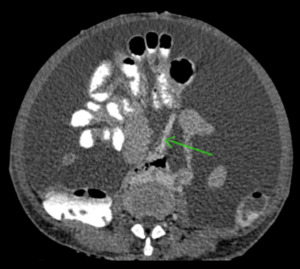 Sigmoid mesocolon is the peritoneal ligament that attaches the sigmoid colon to the posterior pelvic wall. It contains the hemorrhoidal and sigmoid vessels. The most common pathologic process involving this structure is acute diverticulitis. Perforated cancer and Crohn disease also may cause inflammation within the sigmoid mesocolon. 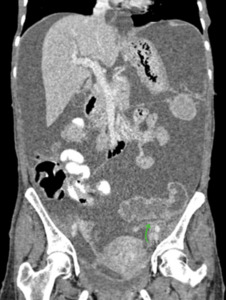 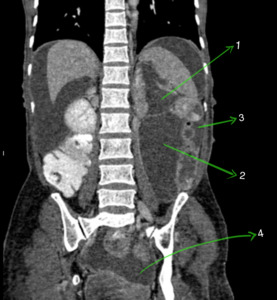 Include the left subphrenic and perisplenic spaces. The phrenicocolic ligament is a relative but incomplete impediment to the spread of pathologic processes from the left paracolic gutter to left subphrenic space. 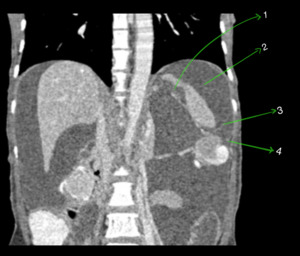 Include the right subphrenic space, Morison pouch (subhepatic or hepatorenal space) and lesser sac (omental bursa) (fig.5). The right subphrenic space is separated from the left by falciform ligament which serves as an incomplete barrier to the spread of disease. The right subhepatic space is an important site of fluid collections resulting from liver injuries because it is the most gravity-dependent space at this site. 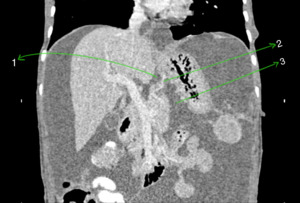 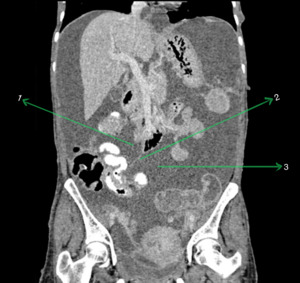 communicate with the pelvic spaces. 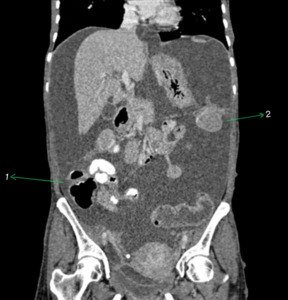 In men, the most gravity-dependent site for fluid accumulation is the rectovesical space and in women, it is the retrouterine space (Pouch of Douglas). Anteriorly, the medial umbilical folds, which contain the obliterated umbilical arteries, divide the pelvic spaces into lateral and medial compartments. On each side, the inferior epigastric artery divides the lateral pelvic compartments into lateral and medial inguinal fossae, the sites of direct and indirect inguinal hernias respectively. 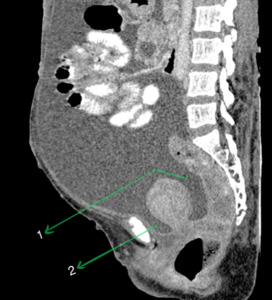 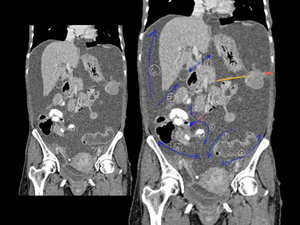 Fluid in the right inframesocolic space (1) cascades down the leaves of the small bowel mesentery (red line) pools at the medial aspect of the cecum, and then overflows into the pelvis (2). Fluid in the left inframesocolic space (3) seeks the pelvis directly. Fluid in the pelvis may ascend the left paracolic gutter (5) but is stopped by the phrenicocolic ligament (orange line). Fluid in the right paracolic gutter (4) ascends to the Morison pouch (7) and then to the subphrenic space (6), where it is stopped by the bare area of the liver. There is potential communication with the lesser sac through the foramen of Winslow (8). Yellow line is transverse mesocolon.

Pathologies involving solid organs/ viscus can extend to adjacent structures along the peritoneal ligaments and spaces as illustrated by the following examples. 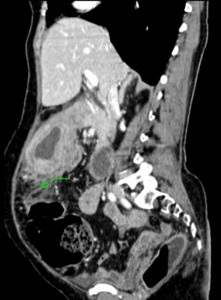 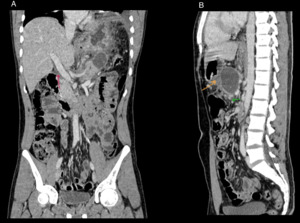 Fig. 24: Coronal (A) and sagittal (B) images of the same patient. In A, red arrow shows rim of hypodensity surrounding portal vein suggestive of spread of inflammation along hepatoduodenal ligament. In B, yellow and green arrows indicate inflammation extending to lesser sac and transverse mesocolon respectively. 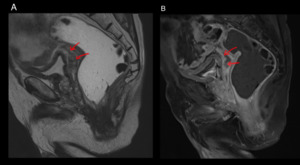