Diagnostic accuracy of TIRADS in evaluation of thyroid nodules

Fig. 7: Transverse US image showing hyperechoic needle along its length, with the...

STUDY POPULATION:104 patients with focal thyroid nodules on ultrasonography in the Department of Radiodiagnosis at Dr. Somervell Memorial CSI Medical College, Karakonam during the study period.

The nodule was assigned a TIRADS score based on the following parameters: presence of spongiform appearance or other typical benign features like simple cysts, white knight aspect or isolated macrocalcification; echogenicity, shape, margin, presence or absence of microcalcification and associated significant lymphadenopathy.

Majority of the cases were sent for ultrasound – guided fine needle aspiration (FNA) which was performed using a 23- gauge needle attached to a 5 ml disposable plastic syringe. The obtained materials were expelled onto glass slides, smeared and sent for cytopathological analysis. Some of the cases underwent surgery and the specimens were sent for histopathological examination. The cases were followed up and the TIRADS score was compared with cyto/ histopathological diagnosis. 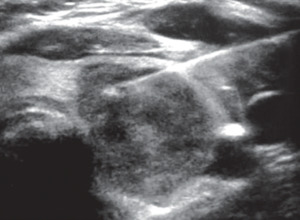 Fig. 7: Transverse US image showing hyperechoic needle along its length, with the needle tip positioned within the left-sided thyroid nodule

DATA ENTRY AND ANALYSIS: Details of all patients including the cyto/ histopathological diagnosis was entered in a proforma, the data documented in Microsoft Excel and processed using SPSS for Windows, Version 17. Variables were plotted and analyzed using Chi square and Fisher exact test. A p value less than 0.05 was  considered statistically significant. Percentage of malignancy in each TIRADS category, Sensitivity, Specificity, Positive predictive value, Negative predictive value and Accuracy of TIRADS were calculated using cyto/ histopathological diagnosis as reference standard. Each of the sonological features were also analyzed to determine its association with a benign or malignant tissue diagnosis.