Hydatid disease from Head to Toe - A pictorial review

Fig. 1: The adult Echinococcus granulosus (1) resides in the small bowel of the...

There are two types of Echinococcus infections.

Hydatid disease (HD) continues to be a significant health problem in areas where animal husbandry is commonly practiced. Hydatid cysts (HCs) can be solitary or multiple. Chest radiography (CXR), ultrasonography (USG), computed tomography (CT), magnetic resonance (MR) imaging, and even urography can depict HCs. The imaging method used depends on the involved organ and the growth stage of the cyst.

Fig. 1: The adult Echinococcus granulosus (1) resides in the small bowel of the definitive hosts, dogs or other canids. Gravid proglottids release eggs (2) that are passed in the feces. After ingestion by a suitable intermediate host (under natural conditions: sheep, goat, swine, cattle, horses, camel), the egg hatches in the small bowel and releases an oncosphere (3) that penetrates the intestinal wall and migrates through the circulatory system into various organs, especially the liver and lungs. In these organs, the oncosphere develops into a cyst (4) that enlarges gradually, producing protoscolices and daughter cysts that fill the cyst interior. The definitive host becomes infected by ingesting the cyst-containing organs of the infected intermediate host. After ingestion, the protoscolices (5) evaginate, attach to the intestinal mucosa (6) , and develop into adult stages (1) in 32 to 80 days.
References: https://www.cdc.gov/parasites/echinococcosis/biology.html

Dogs or other carnivores are definitive hosts, whereas sheep or other ruminants are intermediate hosts. Humans are secondarily infected by the ingestion of food or water that has been contaminated by dog feces containing the eggs of the parasite. After the outer capsule of the egg has been ingested, the freed embryo (oncosphere) enters a branch of the portal vein by passing through the duodenal mucosa. Most of these embryos become lodged in the hepatic capillaries, where they either die or to grow into hydatid cysts (HCs). Some pass through the capillary sieve and become lodged in the lungs and other organs.

An Hydatid Cyst has three layers. 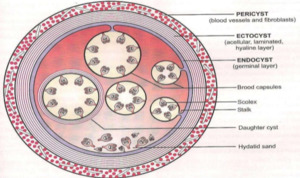 The thickness of these layers depends on the tissue in which the cyst is located. The layers tend to be thick in the liver, less developed in muscle, absent in bone, and sometimes visible in the brain.

The cyst fluid is crystal clear. It is a transudate of serum, contains proteins, and is antigenic. If it is released into the circulation of the host, it can cause eosinophilia or anaphylaxis, although cyst rupture may be clinically silent.

HCs are classified into four types on the basis of their appearance.

Type I: Simple Cyst with No Internal Architecture

On usg, it appears as a well-defined anechoic mass with or without septae and hydatid sand. Rolling the patient during evaluation disperses the sand, creating small echogenic foci, or “falling snowflakes.”

On CT, it appears as a well-defined mass of water-attenuation. Frequently, the septa and cyst wall enhance after injection of contrast. This helps in differentiating type I HC from a simple liver cyst.

MR imaging features are hypointensity on T1-weighted images and marked hyperintensity on T2-weighted images with a low-signal-intensity rim (“rim sign”), which has been described as characteristic of hydatidosis but it is considered nonspecific as it can also be seen in amoebic abscess, hepatocellular carcinoma, and hematoma.

Daughter cysts are seen inside the mother cyst. Floating membranes or vesicles can also be seen in the cyst. Sometimes multiple cysts and echogenic areas that are enclosed together within a single capsule give rise to a “racemose” or “wheel spoke” appearance. Consolidation of the daughter cysts may produce echogenic solid lesions.

At CT, type II HCs can be visualized in three stages depending on the age, number, and arrangement of the daughter cysts.

At MR imaging, daughter cysts may appear hypointense or isointense relative to the maternal matrix on T1- and T2-weighted images. The “serpent sign,” or “snake sign,” which represents collapsed parasitic membranes secondary to damage or degeneration of an HC, is another MR imaging manifestation of an HC. These membranes have low signal intensity with all sequences

Type III lesions are dead cysts with total calcification. They demonstrate strong posterior shadowing at ultrasonography (US) and manifest as round, hyperattenuating areas at CT and hypointense areas at MR imaging.

Rupture occurs in 50%–90% of cases. Cyst rupture is mainly due to the degeneration of parasitic membranes as a result of age, chemical reactions, or a host defense mechanism. HC rupture may be contained, communicating, or direct.

Bacterial superinfection of HC is always secondary to rupture. Up to 25% of ruptured cysts may become infected. Numerous signs of cyst infection are poor delimitation, mixed internal echoes, and air-fluid or fluid-fluid levels. However, these signs can also be seen in both intact HC and ruptured, uninfected HC. The presence of air within the cyst establishes the diagnosis of direct or communicating rupture but does not necessarily imply infection.