Although trauma is the most common cause of SAH, ruptured saccular aneurysms are the most common cause of nontraumatic SAH, accounting for approximately 85% of cases of spontaneous SAH. Of the remaining 15% of cases, two thirds are due to idiopathic perimesencephalic hemorrhage, a benign non-aneurysmal form of SAH that is likely venous in origin. The remaining cases result from a wide variety of causes. [1] 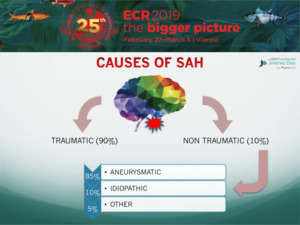 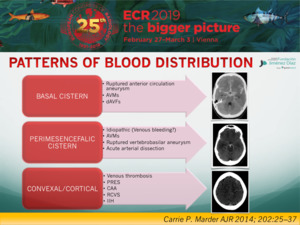 Spontaneous acute cSAH observed at the convexity of the brain is a relatively rare entity, seldom described, with various vascular and nonvascular causes, including the following: CVT (both dural and cortical),vascular malformations (pial arteriovenous malformations, dural arteriovenous fistulas, and cavernomas), RCVS,vasculitides, infectious aneurysms,Moyamoya disease or syndrome,severe atherosclerotic carotid disease, PRES, CAA, and nonvascular disorders, such as primary and secondary brain neoplasmsor even abscess. [2] 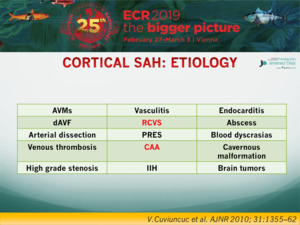 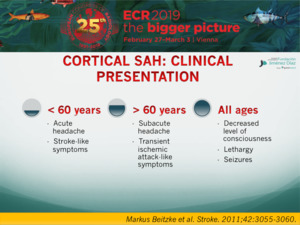 The purposes of this work were the following: first to propose a diagnostic work-up that covers the wide spectrum of potential underlying causes of cSAH and then to review the specific findings of some etiology that may be responsible for cSAH. 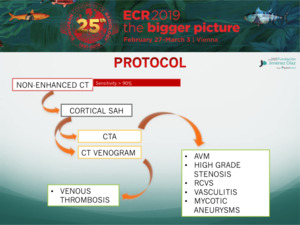 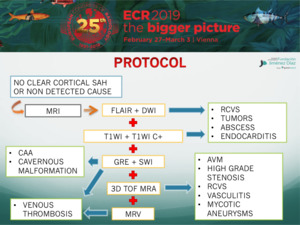