Lungs at Work- Insight into imaging of Occupational Lung Diseases

Fig. 11: HRCT in a welder shows presence of small, round opacities in bilateral upper...

Chest radiography is traditionally one of the primary imaging modalities used. However, advent of HRCT offers greater resolution and allows more sensitive, accurate detection and characterization of lung and pleural abnormalities.

Are caused due to body's reaction to accumulation of dust in the lungs.

Grinder's disease/Potter's rot is a fibrotic lung disease caused by inhalation of silica (crystalline silicon-dioxide). Latency period is about 10-30 years, although it can develop faster in workers exposed to high quantities over shorter periods of time, called accelerated silicosis. Occupations at risk include mining, quarrying, drilling and sandblasting. 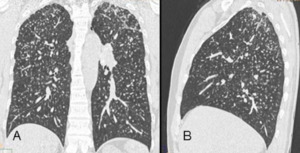 Nodules may coalesce to form bigger fibrotic lesions esp. along the pleura forming pseudoplaques. PMF(Progressive massive fibrosis) is characterized by bilateral, often symmetric irregularly shaped masses, mostly in apical and posterior segments of upper and lower lobes, along with peripheral parenchymal distortion. Cavitation occurs due to ischemic necrosis. Differentials for PMF include lung cancer and tuberculosis but PMF tends to have a slower progression on serial imaging.

Calcification of hilar and mediastinal lymph nodes may be diffuse or peripheral(egg-shell).Other findings may include diffuse interstitial fibrosis, pleural thickening and pleural effusion.

HRCT in accelerated silicosis is similar to simple silicosis and may include multiple ill-defined centrilobular nodules, patchy GGO and lung consolidation. Crazy-paving pattern may develop due to deposition of PAS positive proteinaceous material within the alveoli.

Silicosis predisposes the individual to pulmonary tuberculosis, chronic interstitial pneumonia(UIP) with subsequent fibrosis. Scleroderma and rheumatoid arthritis and lung cancer have also been linked to silicosis.1

Large opacities may cavitate due to mycobacterial infection. Interstitial lung fibrosis and lung carcinoma may develop.

Asbestos fiber is a mineral with an aspect ratio of at least 3:1(length:diameter) in contrast to silica and coal dust which are particulates. Asbestos is found in brake linings, construction, mining and processing, insulation and textile manufacturing, shipbuilding, tiles, bricks, and linings of furnaces and ovens. Asbestos fibers can be serpentine eg.chrysotile or more fibrogenic and carcinogenic amphibole eg.crocidolite.

Inhalation may cause asbestosis, pleural plaques, diffuse pleural thickening, round atelectasis, lung cancer, and mesothelioma- all take at least 20 years to manifest, except for benign pleural effusion which is earliest manifestation.

HRCT shows pleural plaques which serve as a biomarker for asbestos exposure without causing any functional impairment. They are usually found bilaterally along antero/postero-lateral chest wall between 6th-9th rib spaces and along the dome of diaphragm on parietal pleura. They may calcify over time.(Fig 4) 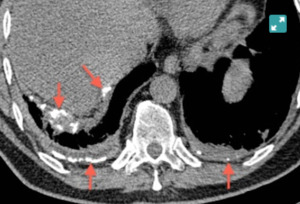 Diffuse pleural thickening results from prior asbestos-related exudative effusions and chronic pleural inflammation. It is less specific for asbestos exposure than pleural plaques and can develop as a consequence of hemothorax, empyema, or instrumentation.

Rounded atelectasis occurs due to buckling of thickened visceral pleura into the adjacent lung, resulting in tethering and subsequent atelectasis of underlying lung.  On HRCT a lentiform or wedge-shaped outline, spiraling of bronchovascular structures into a peripheral lung mass (comet tail sign) located adjacent to thickened pleura in association with volume loss in the affected lobe is characteristic.(Fig 5) 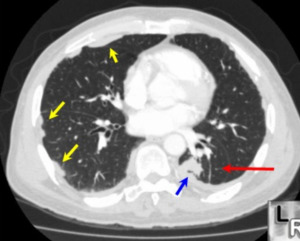 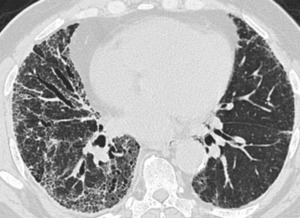 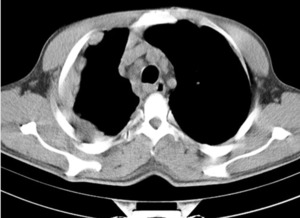 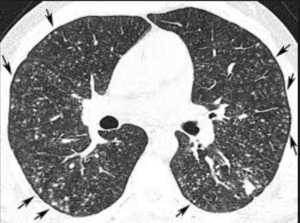 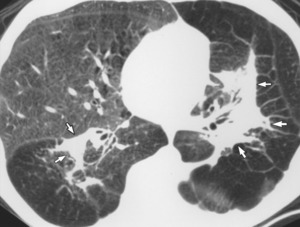 Its caused by simultaneous exposure to silica and less fibrogenic dusts (iron, silicates, carbon) as seen with metal miners, quarry workers, foundry workers, pottery/ceramics workers, and stonemasons.  As the share of inhaled silica increases, the number of silicotic nodules also increase in proportion to the mixed-dust nodules.

HRCT findings include a mixture of small rounded and irregular opacities of mixed dust fibrotic nodules and silicotic nodules. Honeycombing and emphysematous areas may be seen. 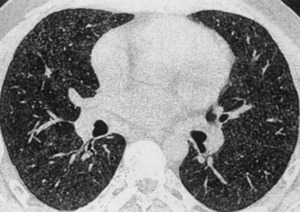 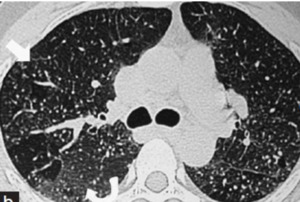 Silicosiderosis occurs on exposure to both iron oxide and silica as in foundry work, iron and steel mills, mining and processing of iron ore and is associated with pulmonary fibrosis.

Occupational exposure to dusts/antigens leads to complex immune response in lungs. Hypersensitivity pneumonitis is the most common IMOLD and is associated with a growing list of inciting antigens. Others include berylliosis and hard metal pneumoconiosis. 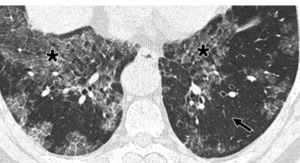 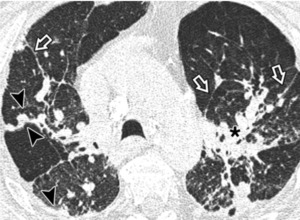 HRCT varies and may mimic sarcoidosis, NSIP, and UIP. Findings consist of parenchymal distortion in the form of bilateral GGO or consolidation in panlobular or multilobular form, extensive reticular opacities, micronodules and traction bronchiectasis- all having lower lobe predominance. Honeycombing is peripheral and basal predominant.

Exposure and absorption of toxic fumes of sulphur-dioxide, ammonia, chlorine, phosgene, nitrogen oxides and ozone from respiratory tract causes chemical pneumonitis. Effects may range from laryngeal oedema causing death to pulmonary oedema without any pulmonary sequelae. Bronchiolitis obliterans or bronchiectasis may develop in survivors. An asthma like condition can arise after a single inhalation of miscellaneous irritant agent, so-called reactive airways dysfunction syndrome.5

Silo filler’s disease is an acute lung injury caused by inhalation of nitrogen-dioxide in an agricultural silo.

Hairdressers are mostly affected where PFTs are altered and suggest obstructive pulmonary disease.6 HRCT may show GGO but is nonspecific and not well documented.

Occurs after exposure to diacetyl(2,3-butanedione), a ketone used in butter flavouring of microwave popcorn. Popcorn production plant workers and other workers in food manufacturing are affected. First described in 2000 in 8 workers who developed progressive dyspnoea and obstructive lung disease.7

HRCT resembles other forms of obliterative bronchiolitis with mosaic attenuation and air-trapping on expiratory imaging. Mild cylindrical bronchiectasis and bronchial wall thickening may be present.8

It is related to inhalation of tiny nylon fibres, and is characterized by GGO and centrilobular nodularities.9

HRCT findings have not been well established although widespread small nodules have been described.10 (Fig14)

Thus its diagnosis relies on an accurate histology and occupational history.

First described in 1992 when an outbreak of organizing pneumonia occurred among textile printing sprayers in factories in Spain. Epidemiologic investigation proposed that the disease was due to aerosol of Acramin-FWN (a polyamidoamine that is applied with a brush or sponge for textile printing).11 The organizing pneumonia evolves into progressive interstitial fibrosis despite the use of corticosteroids. 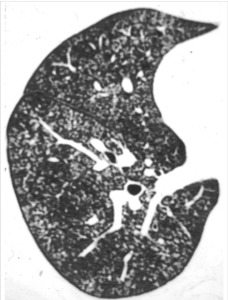 Burning of natural gas produces carbon black which is used as a filler in rubber, plastics, phonograph records, inks and in carbon paper and carbon electrode manufacturing.

A 1993 survery in workers with chest radiographs, revealed reticulonodular abnormalities in 25% of cases.12

The likelihood of identifying these abnormalities was related to total cumulative dust exposure. However, exposure to pure carbon black was reported to induce little if any clinical or functional impairment.