Primary retroperitoneal tumors, Can we narrow the differential diagnosis?

Fig. 1: Drawing of the anatomy of the retroperitoneal spaces at the level of the...

Fig. 2: Diagram of the left retroperitoneal space detailing the fasciae and...

Primary retroperitoneal neoplasms are a diverse group of benign and malignant tumors that arise within the retroperitoneum but outside the major organs.

Of the primary retroperitoneal neoplasms, 70%–80% are malignant in nature, and these account for 0.1%–0.2% of all malignancies in the body.

One-third of malignant retroperitoneal neoplasms are sarcomas; 15% of all sarcomas originate within the retroperitoneum.

Although computed tomography and magnetic resonance imaging can demonstrate important characteristics of these tumors, diagnosis is often challenging for radiologists. Diagnostic challenges include precise localization of the lesion, determination of the extent of invasion, and characterization of the specific pathologic type.

ANATOMY OF THE RETROPERITONEAL SPACE 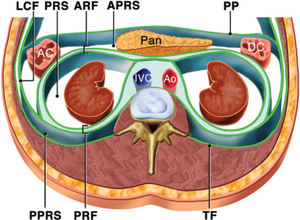 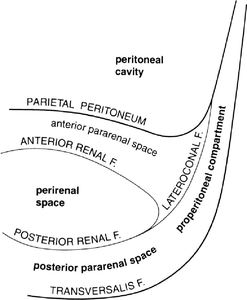 The anterior pararenal space is confined by the posterior parietal peritoneum anteriorly, the anterior renal fascia posteriorly, and the lateroconal fascia laterally. It contains the ascending and the descending colon (pericolonic component), the second (descending), third (transverse), and fourth (ascending) loops of the duodenum, and pancreas (pancreaticoduodenal component).

The posterior pararenal space is confined by the posterior renal fascia anteriorly, by the transversalis fascia posteriorly, and by the psoas muscle medially. It continues laterally external to the lateroconal fascia as the properitoneal fat of the abdominal wall. It almost always contains only fat.

The great vessel space is the fat-containing region that sur­rounds the aorta and the inferior vena cava (IVC) and lies anterior to the vertebral bodies and psoas muscles. 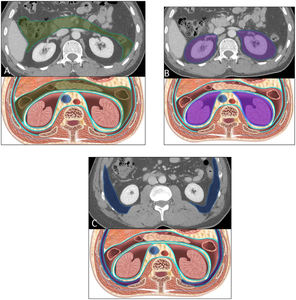 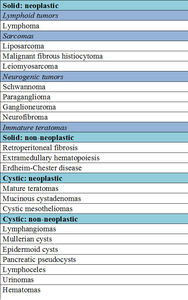 They often appear as a mantle-like mass around the aorta or IVC, extending between and encasing structures without compressing them, The aorta and IVC can be anteriorly displaced, producing the “floating aorta” or “CT angio­gram” sign.

Neurogenic tumors are seen commonly along the sympathetic ganglia, which are located in the para-spinal region, and in the adrenal medulla or the organs of Zuckerkandl (para-aor­tic bodies).

Although radiologic features of neurogenic tumors are often overlapped, predominant or specific CT features are present in each type:

Teratoma accounts for as many as 11% of primary retroperitoneal tumors and is the third most common tumor in the retroperitoneum in children, after neuroblas­toma and Wilms tumor

Sarcomas are rare neoplasms of mesenchymal origin that account for <1% of all malignancy in adults, 15% of which occur in the retroperitoneum.

Liposarcoma is the most common primary retroperitoneal sarcoma and accounts for 40% of cases, and is the second most common adult soft tissue sarcoma.

Liposarcomas are histologically subdivided into five main subgroups in the order of increasing malignancy: 1) well-differentiated, 2) myxoid, 3) dedifferentiated 4) round cell and 5) pleomorphic liposarcoma.

Leiomyosarcoma is the second most common retroperitoneal sarcoma, accounting for 30% of all cases. Leimyosarcomas are most common in the fifth to sixth decade and have a female predominance.

MFH is the third most common primary retroperitoneal sarcoma, accounting for 15% of all cases. They most commonly occur in the fifth to sixth decade and predominantly affect men.

Imaging features are non-specific and typically demonstrate large, well-circumscribed soft tissue masses that enhance heterogeneously. Areas of necrosis and hemorrhage may be seen but are not as extensive as in leiomyosarcomas. Direct invasion into adjacent organs may occur. Calcification occurs in up to 20% in a lumpy or ring-like pattern peripherally or a speckled pattern centrally

RPF is a rare collagen vascular disease that is most common in men of the fourth to sixth decades.

The etiology of RPF is idiopathic in two-thirds of cases, resulting from immune reaction to antigens contained within atheromatous plaques of the abdominal aorta; the remaining one-third of cases are secondary to malignancy, medications, aortic aneurysms, or infections

In the acute stage of disease, avid enhancement can be observed in retroperitoneal fibrosis. During the later stages, mild or even no enhancement occurs.

On MR imaging, RPF has low to intermediate T1-signal intensity. The T2-weighted signal intensity and the enhancement pattern of RPF depend on the activity of the disease.