Review of the Utility of Diffusion Weighted Sequences in Abdominal and Pelvic Magnetic Resonance Imaging for Junior Trainee Radiologists.

Fig. 2: Coronal T2-weighted imaging of the lower abdomen in a 60-year old. Markedly...

Fig. 5: Increased ADC values consistent with T2-shine through. Mucocoele found to be...

Fig. 9: There is high signal intensity on diffusion-weighted imaging (Fig. 8) with...

Fig. 11: High signal on the DWI of this lesion in the patient with colorectal cancer...

Fig. 16: On diffusion-weighted imaging there is T2-shine trhough (black arrows) as...

Fig. 17: On diffusion-weighted imaging there is T2-shine through (Fig. 16) as confirmed...

The motion of water molecules may be 'free' or 'restricted', depending on: distribution between intra and extracellular compartments, barriers such as cell membranes and the inherent tissue characteristics of the medium. Biological tissues are considered complex media and typically demonstrate anisotropic diffusion.3

Diffusion Weighted Imaging: How to acquire?

Spin echo sequencesa are typically employed in the generation of DW sequences. Diffusion-sensiting gradients (DSG) are employed, which impact diffusing spins altering their precession and location, thereby resulting in dephasing and signal loss. This is the reason for low signal on the apparent diffusion coefficient map. Stationary spins remain unaffected by the DSG.5,6

To generate a diffusion weighted sequence: 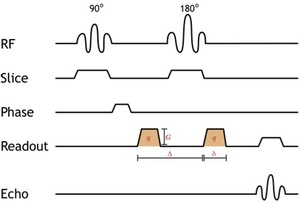 Some degree of fat-suppression must be applied when generating DW sequences to avoid the effects of chemical shift artefact. 5,6

The sensitivity of the imaging sequence to molecular motion may be altered by varying the DSG or the time between the applied gradients.

The degree of signal loss which occurs is determined by the b value, or with the following equation:8

where q = gradient strength and Δ is the time between the dephasing and rephasing gradients.

Increasing the strength (gradient amplitude), duration and interval between the DSG pulses will result in a higher b value, more dephasing and thus an exponential increase in signal loss.

By varying the DSG and thus the b-value, multiple DW images may be generated as follows:

-initially the DSG is set to zero/very low which generates the b0 images.

-increasing strengths of DSG pulses e.g. 40, 400 and 800 are applied in various directions typically along the x, y and z axes to produce source images.

-source images are combined by taking the geometric mean to create trace images also known as DW images, which are interpreted in clincial practice.

-apparent diffusion coefficient (ADC) subsequently calculated from the b0 and source images.8

Typically, b values between 0-1000 are employed in clinical practice. In imaging of the abdomen and pelvis however, a starting b=0 value is typically replaced by a b value of 40-50 s/mm2 to reduce the high signal returned from venous structures, enabling more accurate differentiation of masses and cystic structures from vasculature.10

As alluded to above, the diffusion coefficient is calculated from the b0 and source DWI images and generate an ADC map. It is used to quantify the degree of diffusion restriction. As it is defined as the 'average distance moved by a particle/second, in mm/s2  and represents 'average particle movement in the entire voxel', the word apparent is employed.

Data from the multiple DW source images acquisitions is inserted into the formula8:

where I is the signal, -b is the b value and D is the apparent diffusion coefficient.

The formula is solved for D and enables mathematical calculation of the ADC map which appears rather pixelated.

Trace DWI images and the ADC map are typically interpreted by reading radiologist in conjunction with one another.9

Understanding the DWI and ADC appearances:

The most well-studied example and clinical utility of DW imaging to date is in the context of acute cerebral infarction which is characterised by:

The area of acute infarction demonstrates these imaging characteristics due to the altered diffusion of water molecules in the infarcted tissue.9

On the DW sequences:

Dephased less by the DSG

On the ADC map:

Inherent T2 weighted properties of DWI mean that lesions with a very long T2 relaxation time (TR) will appear bright even if they do not restrict diffusion, known as 'shine through.' (Fig. 2-5.)9, 11

Conversely lesions with a very short TR will appear dark, known as T2-black-out. The ADC may be unreliable in these cases. A typical example may include a subacute haematoma which demonstrates very low T2 signal as a result of the paramagnetic effects of intracellular deoxyhaemaglobin.9

Utilities of DWI in Abdominal and Pelvic MRI Imaging:

DW imaging has emerged as a key tool in abdomino-pelvic imaging. Typically employed in conjunction with conventional imaging including dynamic contrast enhanced sequences, there are many well-established utilities. These include oncological imaging, inflammatory bowel disease and characterising hepatic lesions. We have highlighted pearls and pitfalls below.

Qi et al. demonstrated diagnostic accuracy in Crohn's disease may be increased to 92% by combining MR enterography with DWI.13

DWI also correlates qualitatively with disease activity and inflammatory burden in Crohn's disease with a high sensitivity (94%) and specificity (82%). (Fig. 6-9.)  Pendse et al. demonstrated however that quantitative analysis of the ADC value does not discriminate between segments of disease activity.14

One of the most frequent indications for undertaking hepatic MR imaging is in the characterisation of focal liver lesions. (Fig. 10-12 and 13-14.)

DWI detects liver metastases with a higher sensitivity than T2 weighted imaging. A key fact to be aware of however is that liver tumor detection rates are increased at low b value imaging (e.g. 50 - 150 s/mm2).

Bruegel et al. report a threshold ADC value of < 1.63 x 10-3 mm2/s can be utilised to accurately characterise a hepatic lesion as either benign or malignant in 88% of cases.15

Caution must be taken with necrotic lesions as the region of necrosis will be expected to have less restricted diffusion and therefore a higher ADC value.

Expanded utilities for trainee Radiologists to be aware of:

DW imaging may be useful in detecting diffuse hepatic disease such as steatosis. With more patients being diagnosed with non-alcoholic fatty liver disease, this may be of value in the future.

Increasing hepatic fat and collagen in both fibrosis and cirrhosis result in diffusion restriction and hence a reduction in ADC.16

x Currently, this utility is limited by motion artefact and long acquisition times.

In some cases, DWI may altogether replace the need for contrast-enhanced imaging eg.  contrast contraindicated or in renal impairment.

Rechichi et al. have shown great utility of DW imaging in the staging of endometrial cancer with. They found that DWI was better than dynamic contrast enhanced MRI in determining the degree of endometrial invasion and other authors have proposed replacing DCE-MR imaging with DW imaging. This will not only avoid the need for contrast in such studies but also significantly reduce scanning time per patient thereby generating economic and temporal benefits.17

√ Useful in patients with renal impairment or other contraindication to contrast.

√ May be superior to DCE imaging e.g. in staging of endometrial cancer thereby has potential to reduce scanning times in addition to financial gains.

There is increasing use of DWI in predicting tumor response following chemo-radiotherapy however it is important to recognise that metastases from colo-rectal cancer may not always demonstrate low ADC values. (Fig. 10-12).

This is theorised to be due to central tumor necrosis.

Koh et al. identified that patients with metastases with high ADC values may be an independent predictor for poorer response to chemotherapy.18

√Metastases with a high ADC value indicate a poorer response to chemotherapy.

DWI is extremely sensitive in identifying lymph nodes and DWI may detect more lymph nodes than conventional T2 MR imaging however Heinjen et al. demonstrated that although the mean ADC value for benign nodes was higher than malignant ones, differentiating benign from metastatic nodal involvement is more limited as there is a considerable degree of overlap in the ADC values.19

A further study by van Heeswijk et al. found that the absence of nodal disease after chemoradation correlated well with the prediction of node negative disease. This is clinically relevant as these patients may be suitable for rectum preserving surgery. 20

There has been a recent update to the Myeloma Working Group guidance, who advocate the use of WB-DWI.

√ WB-DWI has greater sensitivity than FDG-PET-CT in detecting marrow infiltration in myeloma patients.

Pitfalls to be Aware of:

DWI sequences may be limited by accuracy due to discrepancies in application of variable diffusion sensiting gradients, the assumption of field homogeneity.

Awareness of variable artefacts including T2 shine through and black out is crucial for the trainee radiologist to accurately interpreting these imaging sequences.