Fig. 4: Situs inversus with dextrocardia and Tetrology of Fallots. Myltiplanar...

Fig. 10: Aneurysmal dilatation of pulmonary artery due to a large PDA (arrow). There is...

Fig. 16: PAPVR. Unilateral pulmonary veins have joined to form an ascending channel to...

Computed Tomography has a vital role in diagnosing congenital vascular anomalies. For CT pulmonary angiography (CTPA) and cardiac anomaly CT examinations, scan is performed from lung apex till level of adrenals with a large field of view. A 1.25-mm collimation should be used, which can be reconstructed at 0.75- 1 mm intervals with a targeted field of view. A pitch of 3 or 6 is required depending on the the patient's ability to hold their breath. Average of 120 mL of nonionic contrast material is injected at a rate of 4-5 mL/sec depending on the weight of patient. For patients with known altered cardiac output, a timing bolus (150) targeted to the region of interest (main pulmonary artery) is helpful to optimize vascular opacification. Depending on the abnormality, arterial and venous phase imaging can be performed through the same structure to characterize blood supply and drainage. Volumetric imaging data can be reconstructed using algorithms such as shaded surface display, maximum intensity projection, or volume rendering, which aid in vessel evaluation. All images in this exhibit are from CT scans performed on 128 slice MDCT Toshiba scanner at Rehman Medical Institute. Submm images were reviewed on state of the art vitrea workstations.

Pulmonary arterial anomalies are mostly related to agensis of a part or whole of the pulmonary arterial system. Cardiothoracic surgeons are interested to know the level of pulmonary stenosis and the status of central arteries for consideration of shunting. Pulmonary stenosis is mostly associated with other cardiac congenital anomalies, commonest is Tetrology of Fallots.

Pulmonary stenosis can be unilateral or bilateral. 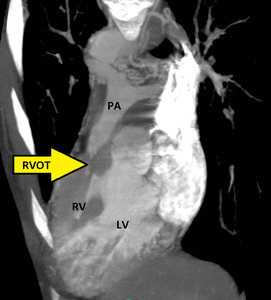 Pulmonary agenesis is complete absence of pulmonary artery. It can be unilateral or bilateral.

Absent Pulmonary Valve Syndrome (APVS) is a rare variant and makes up about 3-6% of patients of Tetralogy of Fallot (ToF). Apart from the hallmark features of ToF, these patients have an absent / rudimentary pulmonary valve, leading topulmonary regurgitation during foetal life, causing aneurysmal dilatation of pulmonary vessels, compressing the trachea or the main stem bronchi.

Coronary artery can have anomalous origin from pulmonary artery, usually at the supravalvular trunkal level. 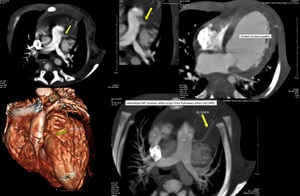 Pulmonary artery dilatation can be seen due to a number of congenital causes e.g. cardiac shunts, PDA, valvular atresia or fistulas. 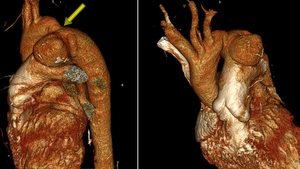 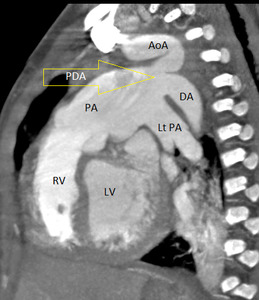 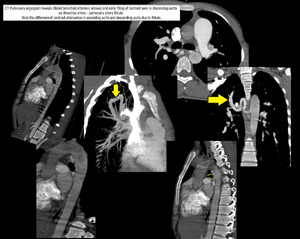 Bronchopulmonary sequestration is a congenital malformation in which a segment of nonfunctioning lung is isolated from the normal airways and receives its blood supply from a systemic artery. It is classified as intralobar (in the visceral pleura of normal lung) or extralobar (in a separate pleural envelope). Sequestrations can be accurately diagnosed on contrast-enhanced CT by seeing a feeding vessel from the aorta.

Abnormal direct communication between pulmonary arteries and veins can be an isolated lesion in  or associated with arteriovenous malformations involving the skin, mucous membranes, and other organs known as hereditary hemorrhagic telangiectasia or Oslar-Weber-Rendu syndrome. Small arteriovenous malformations may be asymptomatic and incidentally found on MDCT. However, as the size and number of lesions increase, patients are at risk for hypoxemia, cyanosis, and paradoxical emboli.