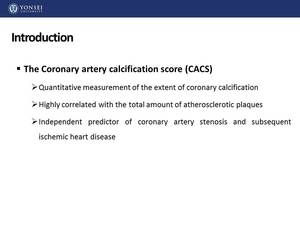 There are several methods for measuring the calcium score, such as volume scores and derived calcium mass, but the Agatston score is the most widely used and have clinical significance. In this method, a lesion whose attenuation is greater than 130 HU and larger than 1 mm3 is defined as calcification, and the score is calculated by multiplying the area of the calcification and the weight.

Recent advances in CT technology have reduced gantry time, the range of detectors has expanded, and images can be obtained more efficiently, regardless of the movement of the heart. 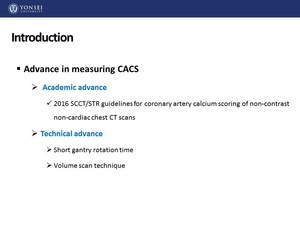 Therefore, we thought that using these methods would have validity in measuring CACS. we evaluated the feasibility of coronary artery calcium score (CACS) on non-enhanced chest CT using a 16-cm axial volume scan technique. 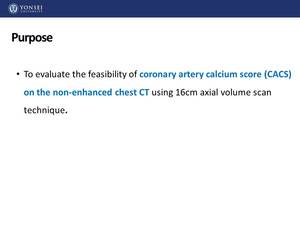