Which number of b-value is better for accurate calculation of virtual MR elastography?

This study involved 39 patients with several liver diseases and after obtaining written informed consent, all patients underwent an MR examination including conventional MRE and diffusion-weighted image (DWI) sequence (see Table 1). In the DWI sequence, 27 patients and 12 patients were scanned using 3 and 5 b-value, respectively.

In this study, Vitrea® software (Canon Medical Systems Corporation, Tochigi, Japan) and in-house software were used to generate several calculated maps (Matlab R2015b; MathWorks). The illustration of procedure of the experiments are shown in Figure 1. Shear stiffness of tissues of each of the patients was calculated from the conventional MRE data (see Figure 1a). Two ADC maps, which have different diffusion components, such as fast and slow diffusion components, were calculated from a slope of the DW signal attenuation between two b‒values (ADC0‒200 s/mm2, ADC200‒1500 s/mm2) for each three and five b-value. Moreover, ADC0-1500 s/mm2, D, D*, and α map were calculated from fitted signal attenuation curves with mono‒exponential, bi‒exponential, and stretched‒exponential models using Bayesian fitting algorithms (see Figure 1b). All estimated parameter maps are represented as follows:

1. Two ADC maps derived from the slow and fast diffusion components without the non-least square method.

where S is the DW signal and subscripts b0-b1500 indicate b-values. In particular, ADC200-1500 is more sensitive than ADC0-200 with respect to the shear elasticity of the biomaterials [5].

2. The estimated parameter maps for each of the IVIM models with non-least square method using the Bayesian fitting algorithm.

A region of interest (ROI) analysis was performed for each patient and was placed on the liver of α map avoiding unwanted signals, such as a large vessel region for each three and five b-value (see Figure 1c). In this study, threshold values were applied to each of the estimated parameters to remove the component of inhomogeneous signal variance caused by the vessels, low SNR, and other imperfections in the liver, as shown in Figure 1d. For the α map, the threshold values were determined from α (0.01 < α < 1). ADC0-200 and ADC200-1500, a threshold of less than 0.025 mm2/s was then used to remove unwanted ADC signals. No threshold was used for the D* and D values in this study. After removing unwanted signals in the ROI, linear regression for each of the patients was applied to the conventional shear stiffness against the estimated parameter map of the IVIM model on the ROI. Outliers of the mean value were systematically excluded for each of the linear regression results (see Figure 1e). Finally, the IVIM maps were empirically converted to virtual shear stiffness from the results of linear regression with the removed the outliers (see Figure 1f). 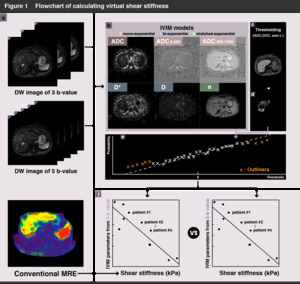