Where do the scattering X-rays that are exposed to the eye lens come from during neonatal cardiac CT examination?

Fig. 7: Measurements of dose contribution from each direction. As shown in the right...

Fig. 9: Measured results for dose contribution from each direction. We found that...

Fig. 10: Estimation of reduction of exposure doses using shielding items. Using the both...

For the phantom study, we used a neonate phantom (Kyoto Kagaku Co., Ltd.) and 320-row CT equipment (Aquillion ONE, Canon Medical System Corporation, Japan).  The irradiation conditions were as follows: 80 kV, CTDI=10 mGy, and rotational speed of 0.275 s/rotation.  The scanning range was determined so as to the upper range limit is the submandibular, and the scan length is 16 cm, from where heart is set at almost center.  The lower range is the upper edge of the iliac crest.

First, in order to evaluate dose contributions of each angle, a square type shielding box was made from lead (thickness of 2 mm).  As shown in Fig. 7 the box can be opened at each side.  This allows the angular contribution from each side to be experimentally derived.  Each surface of the shielding box was numbered as shown in the inset of Fig. 7.  The dosimeters were placed on the surface of the phantom corresponding to the position of the left eye lens; in the area of the left eye lens a normal nanoDot OSL dosimeter is placed, and for the right eye lens position the other dosimeter is placed in a shielding box as described below. 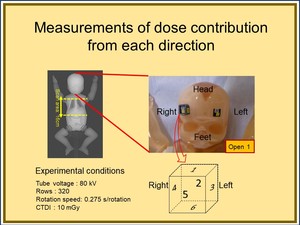 Fig. 7: Measurements of dose contribution from each direction. As shown in the right photograph, we made lead box which can measure individual contributions. The directions are defined by the schematic drawing in the figure. The photograph shows an example for measuring direction 1.

Next, we made prototype lead shields (one is a neck brace, and the other is an eye mask) to carry out the preliminary experiment for obtaining basic data.  The X-ray shields were made of a lead plate having a thickness of 1 mm.  The outer size of the eye mask type X-ray shield is 6 cm in length and 16 cm in width.  The outer size of neck brace type is 3 cm in length and 28.5 cm in width.  These sizes were optimized to use on the neonate phantom.  Both eye lens can be covered with the eye mask, and the neck brace can surround the neck from submandibular to the apex of the lung.  In order to test the shields performance, we performed four different experimental conditions as shown in Fig. 8; in condition “i” both neck brace and eye mask were used, in condition “ii” only the neck brace was used, in condition “iii” only the eye mask was used, and in condition “iv” the experiment was performed without any X-ray shields.  As presented in the Fig. 8 photograph, nanoDot OSL dosimeters were placed at the eye lens positions. 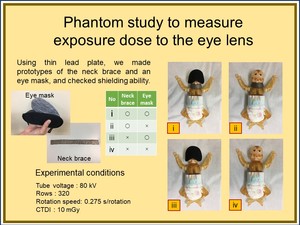 Fig. 8: Phantom study to measure exposure dose to the eye lens. We performed four experimental settings: in the four settings i, ii, iii and iv, the phantom was scanned with and without the neck brace and eye mask. 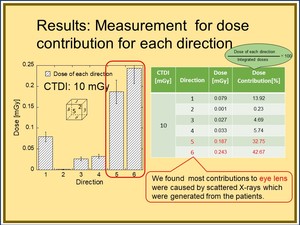 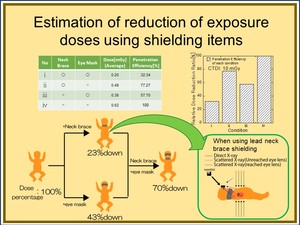