Mesenteric panniculitis. ¨The fat must also be looked at¨

Fig. 2: The etiology of PM is not yet clear, however, many theories have been...

Fig. 3: US-Section mesogastrio. There is a diffuse increase in the echogenicity of the...

Fig. 4: US Transverse section in epigastrium. Associated with the increase in...

Fig. 6: MDCT. Coronal and axial sections. It is visualized in mesentery projection,...

Fig. 9: MDCT. Coronal section abdomen. Presence of the sign of the fatty halo, halo of...

Fig. 10: MRI Sequence out of phase and in phase. Hyperintense mass in mesenteric root...

Considering that a specific cause of the disease has not been objectively established, the evidence establishes a strong relationship between panniculitis as an autoimmune disorder. In general, genetic and environmental factors play a fundamental role in the development of autoimmune diseases (6).

Considering that PM occurs in some patients after certain infections (9,10,11), abdominal surgery or trauma (8), other theories have been proposed to explain this disorder, including post-inflammatory reactions to inflammation or acute infection, or an insufficient blood supply (ischemia) to the mesentery. (Fig. 2) 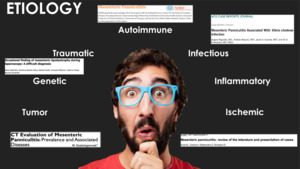 Fig. 2: The etiology of PM is not yet clear, however, many theories have been postulated.

The epidemiology of PM has not been fully defined. A recent study reported that findings compatible with PM occurred in 359 patients (0.24%) of a total of 147,794 MDCT exams performed for more than 5 years in a medical system. Of these, 100 patients (28%) had known malignancy or later were diagnosed with cancer(7). In some reports, the PM has a male predominance of 2:1. And it also appears more frequently during the sixth and seventh decade of life, and its incidence seems to increase with age. Children and adolescents are affected less often, perhaps because of the lower amount of fat in the mesentery.

The symptoms of PM are divided into two categories. Some symptoms, such as abdominal pain, are due to the effect similar to the mass of the mesenteric inflammation and the possible involvement of adjacent structures, including the small intestine. The second group of symptoms occurs in the presence of chronic inflammation and may include weight loss, fever, and fatigue. Some affected people may develop complications such as small bowel obstruction or acute abdomen. Small bowel obstruction prevents the passage of food through the intestines and can cause a variety of nonspecific gastrointestinal symptoms as well as nutrient malabsorption.

In some patients, a palpable mass can be detected in the middle región of the abdomen mass.

The diagnosis of PM is based on the identification of suggestive symptoms, a detailed history of the patient and an exhaustive evaluation of laboratory markers of inflammation. For example, the erythrocyte sedimentation rate  (ESR) and the C-reactive protein (CRP).

The diagnostic methods by images are:

The adequate correlation found between the sonographic findings and those of the CT in different studies allows affirming that it is possible to diagnose PM through ultrasound and also to exclude other entities.

Therefore it is important to know some of the main findings (12): 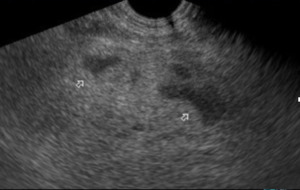 Fig. 3: US-Section mesogastrio. There is a diffuse increase in the echogenicity of the mesenteric fat (white arrows), which displaces structures but does not collapse them. 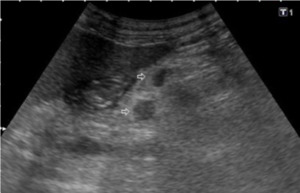 Fig. 4: US Transverse section in epigastrium. Associated with the increase in echogenicity, some ganglionic images smaller than 5mm are recognized 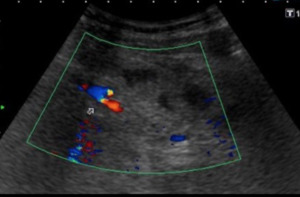 Fig. 5: US Transverse section in mesogastrium. The echogenic mass (PM) involves vascular structures, without affecting their permeability (does not compress them)

PM results in an area similar to the mass of a heterogeneous fat attenuation on CT that can displace local bowel loops but that does not normally displace or compress the surrounding mesenteric vascular structures. Approximately 90% of the cases involve the mesentery of the small intestine(14), especially jejunal mesentery (15) located on the left. 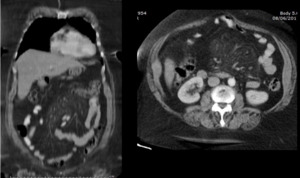 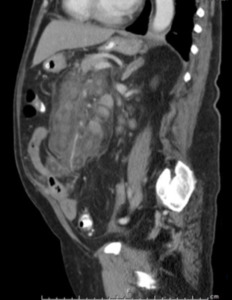 Fig. 7: MDCT. Sagittal section of the abdomen. Heterogeneous mass, in mesenteric root projection, that surrounds structures, without displacing or compressing them, also "pseudocapsule" that defines the pathology. 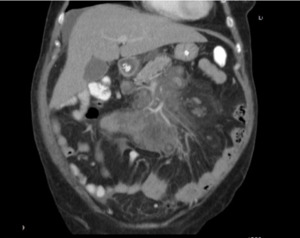 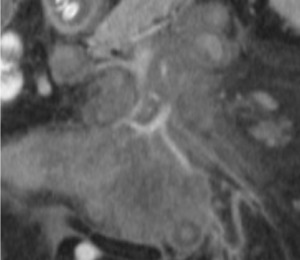 Fig. 9: MDCT. Coronal section abdomen. Presence of the sign of the fatty halo, halo of less attenuation, adjacent to the vessels.

MR represents the most chronic and fulminating subgroup of sclerosing mesenteritis (8). It is characterized by the presence of one or more irregular fibrotic soft tissue mesenteric masses. Calcifications can be observed within the mass, as sequential signs of fat necrosis. There may also be englobement of the adjacent intestinal loops and vascular structures, which leads to signs of obstruction and sometimes to hollow visceral ischemia (14).

Fig. 10: MRI Sequence out of phase and in phase. Hyperintense mass in mesenteric root projection

There is no standardized medical treatment, but variable results have been obtained with anti-inflammatory and immunosuppressive agents. Surgical resection should be reserved for symptomatic cases that do not respond to conservative treatment or in cases of intestinal obstruction. The prognosis is usually good and recurrence is rare (20).

PATHOLOGIES ASSOCIATED WITH PM THAT MAY GENERATE DOUBT IN THE DIAGNOSIS

When a foggy mesentery is observed on CT, it is the responsibility of the radiologist to consider and, if possible, exclude alternative causes of a regional increase in mesenteric fat density, such as edema, hemorrhage, lymphedema, inflammation, and neoplasia before suggesting a diagnosis of PM. (Fig. 11) 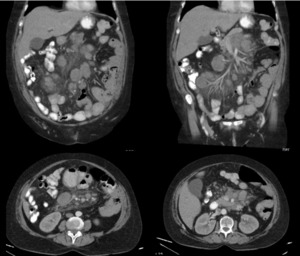