Mesenteric panniculitis. ¨The fat must also be looked at¨

Mesenteric panniculitis (PM), also called sclerosing mesenteritis, belongs to a spectrum of rare diseases of the fatty (adipose) tissue of the mesentery. PM is characterized by fatty degeneration and necrosis, chronic inflammation and, sometimes, scarring and fibrosis of fatty tissue in the mesentery. This inflammatory and sometimes progressive condition is more likely in the spectrum of autoimmune disorders(3).

PM was first described in the medical literature in 1924 as "retractile mesenteritis" (4). Other alternative names have also been used to describe the condition. These names denote the predominant characteristics of the process of the disease in the mesentery. Mesenteric panniculitis refers to the prevalence of inflammation; Sclerosing mesenteritis (or retractable mesenteritis) refers to a predominance of fibrosis, and Mesenteric lipodystrophy refers to a predominance of fat necrosis. Currently, mesenteric panniculitis is the most commonly used and recommended name for the disease. Additional names that have been used for this disorder include mesenteric fibrosis, mesenteric sclerosis, lipoesclerotic mesenteritis, Weber-Christian's disease. 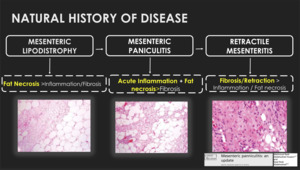 PM is a chronic benign disorder with a favorable prognosis that sometimes resolves itself (spontaneous regression) (5). However, the symptoms of PM can be serious in some patients and can have significant effects on quality of life. The diagnosis of mesenteric panniculitis can be made incidentally after a CT scan of the abdomen, usually for the assessment of abdominal pain(5).