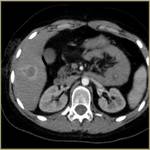 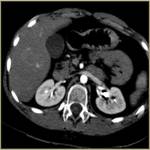 A total of 20 pediatric oncologic patients  with metastatic malignancies underwent 24 RFA ablation sessions. Our study population included 12 male and 8 female patients of average age 9years (5-17years), whereas our patients’ average weight was 30kg (17g-65kg). Regarding lesions’ location, half of our patients (50%) have been treated for metastasis in hepatic parenchyma.  Out of the rest in 5 patients (25%) bone metastatic lesions have been ablated and 5 patients (25%) received RFA session due to lung metastatic disease [solitary- 4 patients (20%) , two lesions -1 patient(5%)]. Median lesion size was 3,5cm in diameter (1.3-4.0cm) and average Ablation Time (AT) was 8 min(7-10min).

The above mentioned lesions were judged to be unresectable by our Institution’s oncology council and locoregional therapy took place in order to improve patient’s life expectancy, as well as life quality.  Technical success, defined as complete tumor necrosis in immediate post ablation CT has been achieved in all cases (100%). Necrotic lesions appear hypodense on CT, surrounded by hypervascular halo due to tissue reaction during the process. Need for early reintervention and RFA repetition did not emerge regarding our patients.

Furthermore, major complications (such as pneumothorax,  subscapsular liver hematoma, liver abscess etc) did not occur. In 5 of our patients  (25%) immediate post-ablation syndrome (mild pain and low-grade fever for 7days) has been recorded. 5 patients (25%) presented fever (up to 38oC) during the 24hours post-ablation and 4 patients (20%) felt pain in the site of the ablation, symptom demanded oral analgesia.

Tumor necrosis was instant also during follow-up sessions (US, CT or MRI) 1month and 3 months after RFA session in the total of our patients (100%). 5 patients (20%) appeared with local recurrence in the site of the ablated lesion 6 months after RFA session. Regarding this proportion of patients a second ablation session conducted successfully and a strong correlation with lesion size emerged, as all of them had initially a lesion diameter measurement exceeding 3cm.

Median survival time was 14,6 months during a 2-year follow-up period for the studied group of patients (measured from the time of initial RFA session).