Pancreas in children: from head to tail

Fig. 1: Pancreas develops from two anlagens that arise from the endodermal lining of...

Fig. 2: Anatomic anomalies of the pancreas are classified as either fusion (pancreas...

Fig. 3: Pancreas divisum in a 5-year-old boy who presented with acute pancreatitis. ...

Fig. 6: Type-I (classic): absent fusion between de ventral duct of Wirsung and the...

Fig. 8: A 4 year-old boy with repeated episodes of vomiting and epigastric distention ...

Fig. 9: The 4-year-old patient presented above underwent abdominal surgery that...

Fig. 11: Heterotopic pancreas in a 19-month-old girl with hematemesis. MRI: Depicts a...

Fig. 18: A 16 year-old girl with hereditary spherocytosis, who had undergone...

Fig. 20: Diffuse fatty replacement and pancreatic atrophy in a 14-year-old girl with...

Fig. 24: Intrapancreatic duplication cyst in a 5-year-old girl with abdominal...

Fig. 25: Late complication of an acute pancreatitis in a 12-year-old girl who underwent...

Fig. 26: Pancreatic fluid collections are defined by presence or absence of necrosis

Fig. 27: Hereditary chronic pancreatitis in a 7-year-old-boy with recurrent episodes of...

Fig. 28: Hereditary chronic pancreatitis in a 13-year-old-girl with recurrent episodes...

Fig. 29: Acute edematous pancreatitis in a 2-year-old boy with abdominal pain and fever...

Fig. 33: Grade III pancreatic injury in a 12-year-old boy who sustained a blunt...

Fig. 36: A 14 year-old girl with epigastric pain and raised amylase, treated as acute...

Fig. 37: Solid-cystic papillary tumor in a 12-year-old girl who presented with...

Fig. 38: A 12-year-old girl who presented to the emergency room with lower-abdominal...

Fig. 39: An enhanced CT was performed to the 12-year-old patient presented above. CT...

Fig. 40: A 16-year-old boy who underwent abdominal surgery due to an urinary bladder...

Pancreas grows exponentially the first year of life, with a pancreatic head more prominent than the body and pancreatic duct (1,5-2mm) in children.

Sonography (US) is a primary screening tool to evaluate the paediatric pancreas, due to its multiple advantages as absence of ionizing radiation, the ability to image without sedation, and real-time evaluation.

MRI in combination with MRCP is a powerful tool for imaging of the pancreatic  duct, and biliary system in the paediatric population.

Low-dose computed-tomography is a vital and accurate tool for rapid diagnostic evaluation of serious illness or injury in children, A major disadvantage  of CT is the inevitable radiation exposure.

Pancreatic developmental anomalies may result in anatomic variants that predispose to specific pancreatic or peripancreatic diseases. 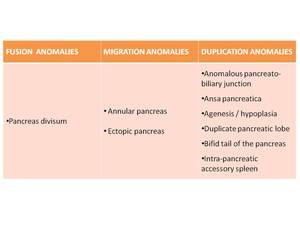 Fig. 2: Anatomic anomalies of the pancreas are classified as either fusion (pancreas divisum), migration (annular pancreas, ectopic pancreas) or a duplication anomalies (number or morphology variation).

The most common anatomic variant (5%-10%). Absent or incomplete fusion between the ventral and the dorsal buds of the pancreas.  As a result the dorsal duct of Santorini drains the majority of pancreatic secretions into the minor papilla with only the pancreatic head and the uncinate process draining through the duct of Wirsung into the major papilla.

Although may be clinically asymptomatic, pancreas divisum is associated with acute and recurrent pancreatitis (functional stenosis at the minor papilla).

MRCP allows the visualization of the two separate ducts of the pancreas, shows the crossing of the common bile duct over the main duct of Santorini to join the duct of Wirsung at the major papilla (ampulla de vater).

It is the second most common anatomic variant.  A ring of pancreatic tissue encircles either completely (25%) or incompletely (75%) the second portion of the duodenum. 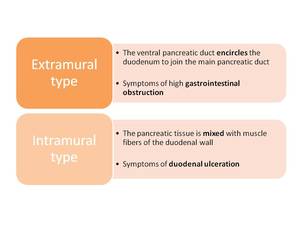 It is associated with other congenital anomalies in up to 70% of children, such as Down Syndrome, Hirschprung disease, polysplenia or tracheoesophageal fistula.

Ultrasound can show abnormal, concentric course of the pancreatic duct around a dilated fluid-filled duodenum.

MRCP is the imaging technique of choice, depicts a complete or partial ring of pancreatic tissue around the duodenum and reveal the encircling pancreatic ducts.  Partial annular pancreas is characterized by incomplete encasement of the duodenum "crocodile jaw sign".

Presence of pancreatic tissue outside the normal pancreas location without any anatomic or vascular continuity with the proper gland.

It is usually located in the submucosa (73%) > muscularis mucosa > serosal surface.

Patients are usually asymptomatic, but if the pancreatic tissue is functional it can develop the same inflammatory or malignant transformation that the normal pancreas. Obstruction, intussusception, ulceration or bleeding may take place when the location is the small bowel.

Anomalous union of the pancreatic and bile ducts outside the duodenal wall, resulting in a long common canal (>15mm). This anomaly causes pancreaticobiliary reflux, possibly resulting in an increase of choledocal  cyst  Fig. 13 , pancreatitis and biliary tract malignancy.

It is a rare congenital variant of the pancreatic ductal system. There is an obliteration of the dorsal pancreatic duct at the junction with ventral duct and is replaced with an additional reversed S-shaped curved  communicating duct between the ventral and dorsal ducts at the pancreatic head, that drains into the minor papilla.

It can predispose to recurrent pancreatitis due to the suboptimal drainage of pancreatic secretions.

Congenital short pancreas occurs when there is a failure of development of the ventral or dorsal  pancreatic buds.

The agenesis of dorsal pancreas is more common and is often associated with polysplenia syndrome. Patients present with abdominal pain, pancreatitis due to Sphincter of Oddi dysfunction or diabetes due to the relative lack of islet cells in the pancreatic head.

Differentiation between lipomatosis and pancreatic agenesis is important and is made on the basis of whether the ductal system is present (lipomatosis) or absent (agenesis).

Cross-sectional imaging of dorsal pancreas agenesis show a short truncated pancreas with a globular pancreatic head and uncinate process of variable size (a compensatory enlargement could be seen), and an absence of the pancreatic neck, body and tail.

It is a very rare congenital anomaly defined as an accessory lobe of pancreatic tissue connected with the main pancreatic gland and containing an aberrant duct.

Fish tale pancreas is a rare congenital  branching anomaly of the main pancreatic duct. There is a division of the pancreatic tail into separate dorsal and ventral buds. It is usually symptomatic, incidentally detected.

MRCP shows a duplication of the major duct in the body of the pancreas and the presence of two pancreatic tails.

Intra-pancreatic accessory spleen can be misdiagnosed as a pancreatic neoplasm and subjected to unnecessary management.

At CT and MR, shows similar imaging and enhancing characteristics to the proper spleen.

CF is the most common genetic disease affecting European population and the most-often cause of exocrine pancreatic insufficiency in children.

It is a rare AR disease, but the second most common cause of exocrine pancreatic insufficiency in children. It may be associated with bone marrow dysfunction and skeletal anomalies.

Diffuse lipomatosis of the pancreas is commonly seen, this results in complete fatty replacement and glandular enlargement, but the islet cells of Langerhans and ductal architecture remain preserved.

Classic triad of omphalocele, macroglosia and hemihypertrophy. Variable degrees of organomegaly can be seen and pancreas may be involved.

Half of the patients have islet cell hyperplasia resulting in hyperinsulinemia and subsequent hypoglycemia.

Greater risk for development of abdominal visceral malignancies, such as pancreatoblastoma.

Single congenital cysts are extremely rare, and have female predominance.

May present as an asymptomatic palpable epigastric mass or may be associated with symptoms related to compression of adjacent structures (pain, jaundice, vomiting).

These cysts are most commonly located in the tail and body of the pancreas, and are typically unilocular thin-walled cysts, ranging in size from microscopic to multiple centimetres.

Pancreatic lesions include multiple cysts, serous cystadenoma and islet cell tumours.  Pancreatic cysts are common (up to 30% of patients), being the first manifestation of disease, the involvement can range from a single to multiple cysts.Cysts arte typically simple but may have peripheral calcification.

It is a hereditary disorder with 100% penetrance but variable expressivity.

Renal cysts are the major feature, may be found in the liver, spleen, adrenal glands and pancreas(in 10% of the patients).

Abnormalities of the foregut developing, are spherical or tubular lesions lined by gastric or enteric epithelium and surrounded by a smooth muscle layer.

Most of these cysts contain gastric mucosa or pancreatic tissue, they can manifest with internal haemorrhage or rupture with peritonitis.

Juxta-pancreatic duplication cysts typically originate from stomach or duodenum, rarely may be found sequestered within the pancreas parenchyma.

It has a wide spectrum of manifestations in children and adolescents, and is a potentially life-threatening condition. Patients typically present with upper abdominal pain, nausea and vomiting.

The most common cause  is abdominal trauma.

Are defined by presence or absence of necrosis:Fig. 26 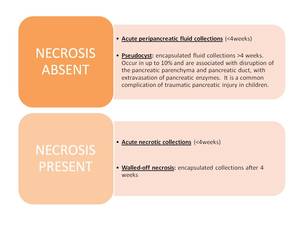 Fig. 26: Pancreatic fluid collections are defined by presence or absence of necrosis

It is a severe form of disease that is usually associated with increased morbidity and mortality.

Presence of infection without significant necrosis

It is the 4th most common solid organ injury in the paediatric population. Pancreatic trauma diagnosis is often delayed because of atypical symptoms. However, trauma is one of the most common causes of acute pancreatitis in children.

The mechanism of injury is attributed to the compression of the pancreas against the vertebral column. Young children are prone to develop more pancreatic injuries than adults due to the flatter diaphragm, thinner abdominal wall, and higher costal margins.

Imaging findings:70% injuries in the pancreatic body with 10% occurring each in the head, neck and tail. 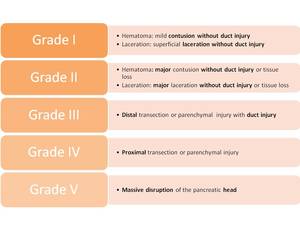 Fig. 30: Pancreatic injury scale (American Association for the Surgery of Trauma). Advance one grade for multiple injuries up to grade III. Proximal injury: to the right of the superior mesenteric vein.

<1% of all epithelial tumours of the pancreas (boy predilection).

The typical presentation is a large, palpable abdominal mass, although nonspecific symptoms may be present. Alpha-fetoprotein are elevated in >55% of patients, and the tumor may also secrete adrenocorticotropic hormone.

It is associated with Beckwith-Wiedemann syndrome.

Can be locally invasive but metastatic disease is rare.

It can arise from pancreatic ducts or acini. 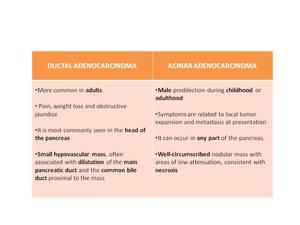 -Functioning:20% of malignant pancreatic tumours. May be associated with specific syndrome complexes such as multiple endocrine neoplasia type I (MEN1) Fig. 35 and may also be seen in Von Hippel-Lindau disease.

Accounts for <3%. It has female predilection, and approximately 20% occur in children.

Imaging findings: 50% occur in the head

Metastatic disease to the pancreas is uncommon, but can be seen with neuroblastoma, lymphoma (particularly Burkitt) Fig. 38 Fig. 39 , some sarcomas Fig. 40 Fig. 41 .