RAD is considered the most common cause of potentially curable secondary hypertension that, if left untreated, leads to end-stage renal disease. It is found in up to 5% of the general hypertensive population and in patients with symptomatology suggestive of renovascular hypertension the prevalence of RAD rises to 20–40%.

The most common clinical features of RAD are poorly-controlled hypertension, renal impairment and, in cases caused by atherosclerosis, symptoms of arterial stenosis at other sites, like cardiovascular and cerebrovascular disease.

Pathophysiological process by which RAD leads to irreversible hypertension (Fig. 1): 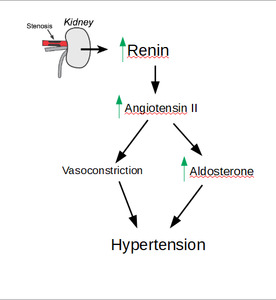 RAD can be caused by several pathologic processes (Table 1):

Atherosclerosis accounts for about 75% of cases of RAD. Atherosclerotic RAD are more common in the elderly and patients with diabetes and multiple cardiac risk factors. It usually involves the ostium and proximal third of the renal artery, appearing as concentric or eccentric stenosis with calcifications (Fig. 2).

Polyarteritis nodosa is a systemic inflammatory necrotising vasculitis that involves small to medium-sized arteries. It is more common in males, usually presenting in the 5th to 7th decades.

Takayasu arteritis (Fig. 3) is a granulomatous large vessel vasculitis that predominantly affects the aorta and its major branches, including renal arteries. It occurs more commonly in younger females (female to male ratio is around 9:1) and has an increased prevalence in Asian populations. 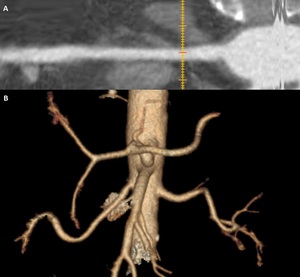 Fig. 3: Takayasu arteritis. A: Right renal artery, with tubular stenosis in the proximal and middle third of the vessel; B: Volume rendering

Abdominal aortic coarctation (midaortic syndrome) is an uncommon disease of unknown cause, characterized by progressive narrowing of the abdominal aorta and its major branches, including renal arteries. It usually affects children and young adults, manifesting with hypertension, intermittent claudication and renal failure, but arteritis and atherosclerosis are not present. 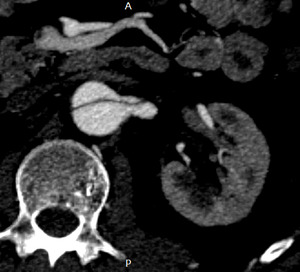 FMD (Fig. 5) is the second most common cause of RAD, accounting for about 20% of cases. It is a non-inflammatory, non-atherosclerotic, autosomal-dominant angiopathy of small and medium-sized arteries, affecting mostly young women. It causes stenosis of renal arteries due to abnormal cell growth within the arterial walls.

FMD is classified by the affected layer of the renal artery wall, as intimal, medial and adventitial.

Intimal FMD consists of concentric accumulation of collagen beneath the internal elastic membrane, creating a smooth stenosis, usually in the middle segment of the artery.

Medial FMD is the most common type (approximately 90% of cases of FMD). It is divided into several subtypes, with medial fibroplasia being the most common one. In this subtype, smooth muscle is replaced by collagen, forming thick ridges, which alternate with areas of small aneurysm formation. This results in the typical “string of pearls” appearance on angiography.

In adventitial FMD, a collagenous infiltrate surrounds the adventitia, manifesting in discrete focal or tubular stenoses. 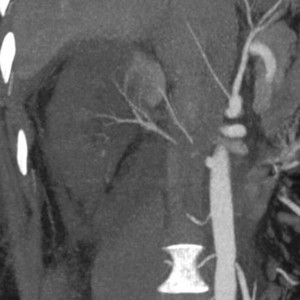 Early detection of RAD is important in order to treat the disease adequately and thus avoid end-stage renal disease. This is where radiologic imaging plays its crucial role.

Conventional digital subtraction angiography (DSA) is still considered the gold standard in the imaging of RAD. It has the advantage of superior resolution for the evaluation of small vessels, and allows for simultaneous therapeutic interventions. However, in recent years, there has been a shift towards noninvasive techniques, such as CTA, which is an imaging method that allows the visualization of not only the vessel lumen, but also the vessel walls, renal parenchyma morphology (Fig. 7).

CT also allows the radiologist to view the surrounding tissues, which may be helpful in diagnosing other causes of refractory hypertension, such as adrenal disease (Fig 8).

Being noninvasive, CTA also carries a significantly lower amount of risk for the patient compared to DSA.