Uterine fibroid in all its states: MRI findings.

Fig. 11: Positions of the uterine cavity

Fig. 23: Uterine Leiomyomas and Their Variants

1. Reminder of the radiological anatomy of the uterine cavity:

Uterus occupies a medial and subperitoneal position in the female pelvis, just behind the bladder and in front of the rectum.

It is a fibromuscular organ, divided into three main anatomic segments (from superior to inferior): the fundus, corpus (body), and cervix (extends into the vagina).

It is divided into the mesometrium (largest portion), the mesosalpinx (mesentery of the uterine fallopian tubes), and the mesovarium (connects the ovaries to the broad ligament).

It serves as mesentery to the female pelvic organs and contains blood vessels, nerves, and lymphatics. Fig. 4

Spotted in MRI by their vascular content (T1 with fat suppression and Gadolinium) Fig. 3.

The cardinal ligaments are also known as the lateral or transverse cervical ligaments Fig. 5 .They are situated along the inferior border of the broad ligament and house the uterine artery and uterine veins.

They are common reservoir of cancerous cells.

Inserted on the uterine horns, anterior flap of the broad ligaments.

In hypersignal after injection (arteriole).

Role in the anteversion of the uterine body.

The uterosacral ligaments are bilateral fibrous bands, which attach the lateral edges of the cervix to the anterior surface of the sacrum Fig. 8 . They appear in hyposignal on T1 and T2 Fig. 9 . 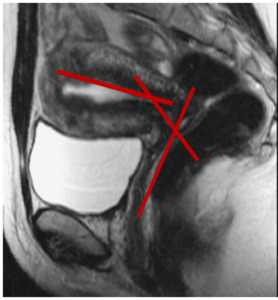 Zonal radio-anatomy of the uterus: Fig. 12

MR imaging allows visualization of uterine zonal anatomy and its changes clearly. It is required to evaluate the local disease extent of gynecological disorders in both benign and malignant cases.

During the reproductive period, the uterus shows three distinct zonal layers in the uterine corpus and the cervix on T2-weighted images (WI). 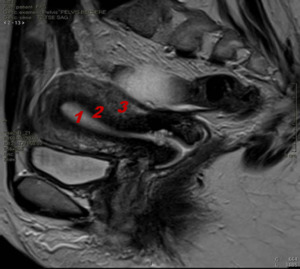 Numerous classifications of myomas can be found in the literature (Lasmar et al., 2005; Stamatellos and Bontis, 2007).

All of them take into account the degree of intramural extension and/or uterine cavity distortion.

The fibroid classification adopted by the ESGE (European Society for Gynecological Endoscopy) has the advantage of being very simple (G0 is a pedunculated intra-uterine myoma, G1 has its largest part (>50%) in the uterine cavity, and G2 has its largest part (>50%) in the myometrium). More recently, the FIGO classification was published (Munro et al., 2011), describing eight types of fibroids as well as a hybrid class (association of two types of myomas). 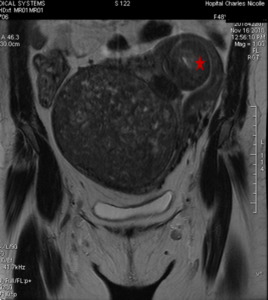 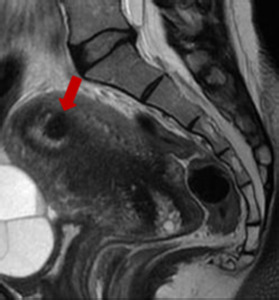 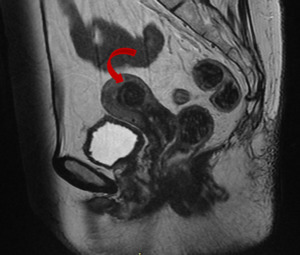 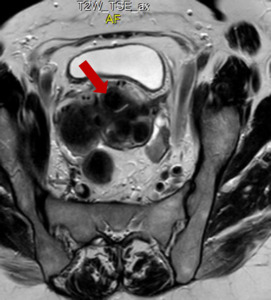 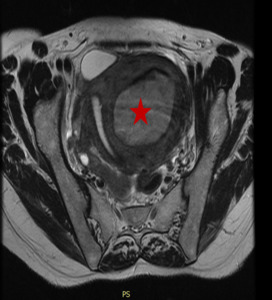 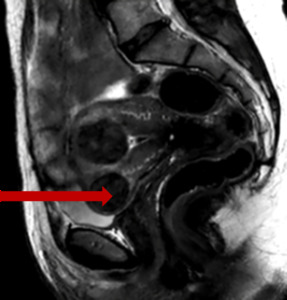 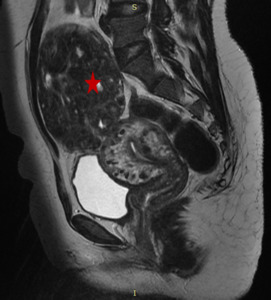 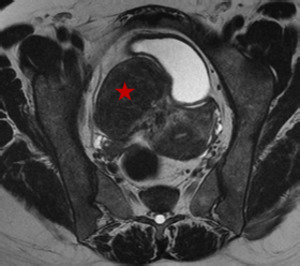 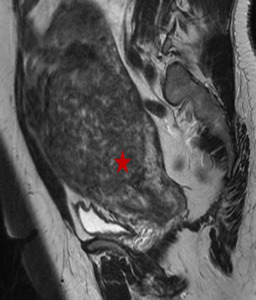 Ultrasound is the gold standard test for uterine fibroids, that enables easy and inexpensive confirmation in almost all instances.

But, when is it necessary to practice a pelvic MRI ?

It also distinguishes adnexel masses that can mimic subserosal fibroid, and detects features of malignancy that orient the diagnosis of variant fibroma or leiomyosarcoma.

To summury we indicate pelvic MRI in case of:

What is the MRI protocol ?

Based on a manuscript proposing an imaging algorithm for the work-up of uterine leiomyoma (European Society of Urogenital Radiology (ESUR) Guidelines : MR Imaging of Leiomyomas) published on February 2018.

Several  aspects can be secondarily noticed according to the type of degeneration. 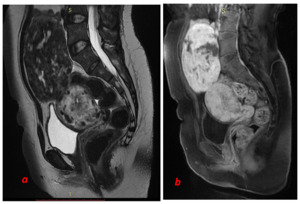 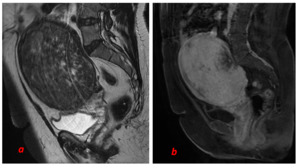 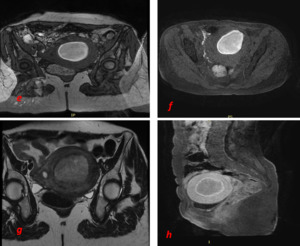 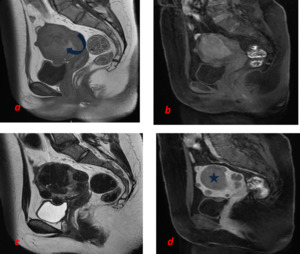 In contrast to ordinary leiomyomas, leiomyoma-variants are neither well studied nor understood from an imaging perspective.

In between, there are several leiomyoma variants, such as mitotically active, cellular, and atypical leiomyomas, as well as smooth muscle tumors of uncertain malignant potential (STUMP).

Recent advances in magnetic resonance techniques have enabled the acquisition of functional information using modalities such as diffusion-weighted images (DWIs) or dynamic enhanced contrast MRI (DCE), images that help better characterize these uterine masses and detect any sign of malignancy.

An intermediate T2 signal and a high b value (1000 s/m2) signal were found in STUMPs and malignant tumors significantly more often than in benign tumors.

Heterogeneous enhancement, although subjective , is more frequent in the malignant lesions.

In addition, a leiomyosarcoma must be suspected in front of masses with poorly defined margins, areas of hemorrhagic necrosis and marked heterogeneous enhancement.

The available evidence suggests that hypointense T1 signal, moderate T2 signal intensity, and high signal intensity on DWI are not typical findings of ordinary leiomyomas, and thus, if present, especially in combination, might raise the possibility of a leiomyoma-variant or a leiomyosarcoma.

In summary, although some MRI features indicate different types of myoma degeneration, there are no definitive imaging findings that reliably predict malignancy signs of uterine masses. Thus the diagnosis is based on the histological confirmation by noting the presence of infiltrative margins, nuclear atypia,and increased mitotic figures. 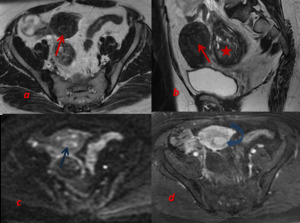 Fig. 28: Axial(a) and Sagittal (b) T2 MR Weighted- DW (c) -T1MR Weighted Fat-suppressed and injected image. 52year old woman referred for management of a suspected right ovarian mass seen in ultrasound. The latter was detected in MRI with an heterogeneous appearance (Red star). Intra-mural leiomyoma(Figo4), discovered fortuitly, in hyposignal T2 surrounded by a peripheral hypersignal T2 (a,c) which is restricted in diffusion (c), early and intensively enhanced after injection. The value of ADC was at 1.1 (not showed). We concluded atypical leiomyoma which necessitates histological confrontation.
References: Hôpital Charles Nicolle-Tunis 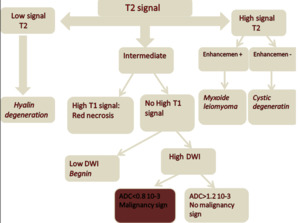