Cardiac MRI evaluation of dilated cardiomyopathy: what every resident should know

Table 1: Use and significance of different CMR sequences applied for the evaluation of... 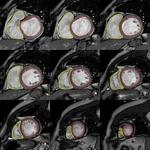 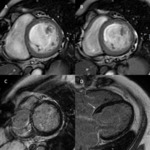 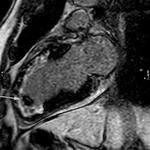 Fig. 5: Postischemic dilated cardiomyopathy in a 66-year-old patient with a severe... 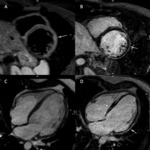 Fig. 7: A 38-year-old patient with myocarditis. The T2-STIR image of a mid-ventricular... 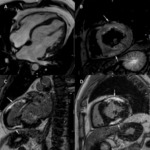 Fig. 8: A 40-year-old patient with HCM in the "burn out" phase. Asymmetric hypertrophy... 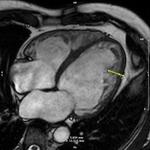 Current clinical indications to CMR in DCM can be summarized as follows:

Although the acquisition technique should be tailored to a specific clinical request, a standard imaging protocol in DCM has to include Cine-SSFP, T2w-STIR, T1 mapping, T2 mapping and LGE.

Table 1: Use and significance of different CMR sequences applied for the evaluation of DCM. Modified from Francone[5]
References: Bioimaging and Radiological Sciences, Catholic University, A. Gemelli Hospital - Rome/IT

At present CMR can be considered as a reference technique not only for the quantification of ventricular volumes and functional parameters but also for the measurement of the wall thickness. The primary method used to assess the myocardial function is the steady state free precession (SSFP) technique.

The short-axis images are usually analyzed on a per-slice basis while the Simpson’s method (“stack of disks”) is applied. One example of the left ventricular contouring is shown in Fig. 1.

Table 2 and Table 3 contain normal values for the left and the right ventricular dimensions and functions according to gender and age (from 20 to 69 years). [9]

The values of EDV of LV higher than 100ml/m2 in men and 95ml/m2in women are considered as values indicating dilatation.

Systolic dysfunction is the most important independent indicator of the outcome in DCM. The evaluation of diastolic filling allows further identification of subgroups with divergent long-term prognoses.

Previous studies showed that RV mass of DCM patients is comparable to the RV mass of normal subjects, whereas LV mass value is significantly higher and there is larger trabeculation. When the disease has progressed though it can also lead to the diffuse myocardial wall thinning of LV (diastolic wall thickness < 5.5 mm).

A myocardial inflammation mediated by an acute or chronic viral infection, direct toxic injury or autoimmune response is one important cause of DCM.

In cases of diffuse edema the T2 mapping technique can help to assess an ongoing myocardial inflammation.

For the examination of patients, suspected of having DCM, late-enhancement sequences have to be performed. Three patterns of DCM-related LGE are reported [10]:

The T1-mapping techniques were recently proposed for the diffuse interstitial fibrosis, as they allow to identify an increased interstitial accumulation of gadolinium at steady state related to the expansion of the extracellular space with subsequent T1-relaxation time shortening.

A thrombus is a common complication of DCM that might remain undetected during the transthoracic echocardiography. The formation of thrombi is triggered by the so-called Virchow’s triad that comes with a hypercoagulability status, hemodynamic changes (stasis and turbulence) and endothelial injury/dysfunction. Biventricular stasis facilitates the formation of thrombi in the left ventricle first, followed by the right ventricle. [5]

CMR is the most preferred diagnostic tool for thrombus detection which looks like a soft-tissue intracavitary lesion.

The signal in the T1 and T2 waited images can vary depending on the age of thrombus:

The most sensitive sequence for thrombus detection is the LGE sequence, here the thrombi appear as black formations because they are avascular and they don’t show contrast enhancement. It’s possible to use both the conventional (200-300ms according to LL) and the long (>600ms) inversion time (IT). Fig. 4

The organized chronic thrombus may show peripheral enhancement in the LGE images due to fibrous contents.

The detection of the underlying etiology and an accurate disease monitoring may be crucial for the optimization of individual therapeutic strategies and stratification prognosis.

In LGE images ischemic cardiomyopathy shows areas of subendocardial or transmural enhancement in coronary distribution, abnormal wall motion might be visible in the affected areas too. Fig. 5

When it comes to CMR, a differentiation between various forms of nonischemic DCM is still a complex issue and it’s open for further research. CMR might offer an additional significant diagnostic contribution as compared to conventional diagnostic tools, above all thanks to its unique tissue characterization capability that narrows down the differential diagnosis. [5,12,13]

In patients with recent-onset DCM, identification of myocarditis has important clinical implications due to the high potential for LV recovery. Fig. 7

Approximately 5.5%– 9.0% of patients with HCM undergo a burnt-out phase involving the appearance of DCM at MR imaging. Fig. 8