Fig. 1: 51-year-old woman with SLE and antiphospholipid syndrome and recent onset of...

Fig. 2: 69-year-old woman with Systemic Sclerosis with evidence of alterations in...

Fig. 3: Patient with history of end-stage Systemic Sclerosis and atonic dilation of the... 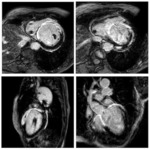 Pathophysiology of cardiac involvement in ACTDs

Cardiac abnormalities in ACTDs are the consequence of multiple pathophysiological mechanisms which lead to a progressive development of a myocardial fibrosis (Table 1):

- presence of a chronic systemic inflammation;

- accelerated atherosclerosis with abnormal reactivity of the vessels against systemic inflammation;

- myocardial ischemia injury caused by alteration of both micro- and macrovascular circulation;

Early pathophysiological researches postulated the crucial role of accelerated vascular injury, in which the co-existence of endothelial alterations, dyslipidemia and coagulation products, would lead to an early atherosclerosis and its subsequent complications. More recently, experimental studies on autoimmune myocarditis have instead reconsidered the central role of autoimmunity against myocardial components as the main factor of myocardial damage.

Rationale of the use of CMR in ACTDs

In clinical practice, CMR is the most sensitive non-invasive imaging method in the early detection of cardiac involvement in ACTDs, particularly for its ability to perform myocardial tissue characterization.

CMR protocols in these Pts should aim the assessment of:

In the subclinical stages of the disease, most Pts show normal cardiac volumes with normal biventricular function. A moderate increase in LV wall thickening due to inflammation may preclude the detection of a small increase in volumes, which may become evident only in later stages of disease, when the inflammation has decreased and a diffuse interstitial fibrosis prevails. Similarly, the increase in ventricular mass, typical of the early stages of inflammation, can be subsequently followed by both a reduction, due to physical inactivity, or an increase, due to dilated cardiomyopathy and HF.

A severe global impaired LV function can be found in advanced stages; this picture may sometimes represent the onset of a previously silent myocardial involvement.

Another typical feature is represented by an impaired function of the right ventricle (RV), which could be due to the development of pulmonary arterial hypertension (PAH) - in cases of a co-existent pulmonary involvement - or as a consequence of the left-sided HF.

The current diagnostic standard for the characterization of myocardial tissue injury is the endo-myocardial biopsy; however, although highly specific for the differentiation between myocardial inflammation and ischemic lesions, it has a relatively low sensitivity for the overall assessment of myocarditis process, as it depends on the number and location of biopsy samples. In this setting, CMR is an accurate and non-invasive diagnostic method for the identification of myocardial inflammation and is essential for the effective clinical management of these forms.

(a)  The presence of focal edema in T2 STIR sequences is a common finding in ACTDs and it reveals an active myocardial inflammation. However, these sequences are often suboptimal, due to the presence of artifacts, regional variations in coil sensitivity, signal loss due to high or arrhythmic heart rates and imperfect blood suppression in the regions with slow flow. An increase in the T2 ratio (ratio between the myocardial and the skeletal muscle signal) can often represent the only alteration that can be evidenced by conventional CMR imaging in the subclinical ACTDs or in the course of immunosuppressive treatment. However, even this technique may be unreliable due to the presence of a coexisting myositis, especially in SLE or PM-DM, in which comparison with skeletal muscle can result in a large number of false negatives.

(b)  About the scar/fibrosis detection in ACTDs, the LGE distribution is directly related to the pathophysiology of myocardial injury: typically, LGE has a non-ischemic pattern, it does not follow the coronary territories distribution,shows variable involvement of wall layers (epicardial, linear intramural or transmural).

-      an intramural/subepicardial LGE which does not follow the distribution of the coronary arteries, is indicative of a focal myocarditis;

-      a subendocardial/transmural LGE that follows the distribution of the coronary territories, is more likely the result of an ischemic event, which has healed within an accelerated atherosclerotic disease.

(c)   Recent histopathological studies have shown that the development of a diffuse interstitial myocardial injury in ACTDs, even in subclinical phases, can cause a difficult assessment of tissue characterization through conventional LGE techniques; in this scenario, the new mapping techniques allow an early and quantitative evaluation of the diffuse myocardial disease. In particular, T1 and T2 mapping have a complementary role in the study of ACTDs: pre-contrast (native) T1 is able to identify interstitial myocardial abnormalities (due to several cardiomyopathic substrates, such as inflammation or fibrotic infiltration); conversely, T2 mapping is more specific for the detection of edema. Therefore, a combination of both parameters has a critical role in these Pts: T1 allows the identification of Pts at risk of (or with) myocardial injury, while T2 gives information about the inflammatory activity.

Mapping sequences ​​can also be used to identify the phases of myocarditis: T1 native and T2 values ​​will be very high in acute myocarditis, whereas, when the inflammation decreases, these parameters show a progressive reduction. However, while T2 values can completely normalize with the resolution of inflammation, the persistence of abnormal T1 native values can ​​indicate fibrosis accumulation, transition to remodeling and potential evolution towards dilated forms and HF.

The measurement of T1 values before and after Gd administration allows the calculation of extracellular volume (ECV), whose increase represents a sensitive marker of diffuse fibrosis, due to the enlargement of the interstitial space and the delayed contrast wash-out (which in turn are caused by reduced capillary density inside the fibrotic myocardium).

In this disorder, both immune-complexes deposition and autoantibodies formation are described; the first lead to vascular injury and interstitial inflammation, while the second act as a trigger for an abnormal inflammatory immune-mediated response.

Despite primary myocardial involvement is considered uncommon, SLE myocarditis occurs in nearly 10% of Patients and it can be clinically silent in many cases, with a higher prevalence in post-mortem studies.

Concerning the alterations of myocardial perfusion on first-pass sequences after Gd administration, perfusion defects in the SLE are more typically circumferential, with a diffuse subendocardial pattern typical of a microvascular disease.

Several studies showed that myocardial lesions in SLE can show each of the previously described LGE patterns: diffuse subendocardial (Fig 1), subepicardial and subendocardial/transmural, due to vasculitis, myocarditis and myocardial infarction, respectively.

General features. Systemic sclerosis (SSc) is a multi-systemic disease involving small vessels and connective tissues, that manifests with diffuse fibrosis of the skin and multi-organ injury. The heart is one of the main organs involved, with an estimated prevalence of 15-35%.

The direct myocardial damage in SSc is the consequence of a complex pathogenetic process which includes microvascular alterations with vasospastic episodes of small coronary arterioles (the so-called myocardial Raynaud’s phenomenon), which lead to ischemia-reperfusion injury, collagen accumulation and chronic inflammatory disturbances.

CMR findings. Concerning morphological changes, LV dilatation is one of the most frequent findings; it can occur independently of PAH, indicating a primary LV involvement.

LV systolic dysfunction is rarer in the early stages of the disease, while diastolic dysfunction, kinetic abnormalities and ventricular dyssynchrony are the earliest manifestations of cardiac involvement.

A "patchy" distribution of myocardial fibrosis documented in the LGE is a pathognomonic feature of the disease: it shows a non-coronary type pattern, with preferential location at the intramural level, which tends to spare sub-endocardial and epicardial layers; it mainly involves the interventricular septum and the LV free wall. Myocardial fibrosis usually appears as linear striae interrupted by small spiculations. (Fig 2; Fig 3)

Another typical aspect is the patchy nodular LGE with indistinct borders at the basal segments of the interventricular septum, involving the upper and lower RV insertion points; this finding is frequently associated with a coexisting PAH.

This variability af LGE distribution pattern is can be also seen in overlap forms, which are entities that clinically satisfies the criteria of at least two connective tissue diseases (Fig 4).

However, a diffuse myocardial fibrosis was reported in several autopsy studies and it is thought to represent the final expression of chronic myocardial inflammation, with recurrent episodes of ischaemia-reperfusion injury and “contraction band necrosis”.

In this setting, T1 mapping and extracellular volume (ECV) quantification can be used for detection of subclinical myocardial involvement. In particular, increased T2 and expanded ECV could be the earliest CMR abnormalities in SSc patients without LGE alterations, and they are both showed a positive correlation with indices of SSc activity and severity.

General features. Inflammatory myopathies (IM) are a group of autoimmune diseases characterized by symmetric proximal muscle weakness, electromyography’s alteration, muscle enzyme augmentation and inflammatory cells infiltrates at muscle biopsy. These disorders include Polymyositis (DM), Dermatomyositis (DM), necrotizing autoimmune myopathy and inclusion body myositis. They are generally characterized by inflammation of the skeletal muscles of the trunk and proximal limbs, with or without skin involvement.

Cardiovascular involvement and pathophysiological mechanism. The most frequent clinical cardiac manifestations in PM-DM is a congestive HF, caused by myocarditis. Chronic myocardial inflammation, even if in subclinical phases, could progressively lead to impaired left ventricular dysfunction and evolve in restrictive cardiomyopathy. The various forms of IM are characterized by different pathogenetic mechanisms: in PM (and in included body myositis) muscle lesions are the consequence of a direct injury by cytotoxic lymphocytes against fibrocells, while in DM there is an endothelial complement-mediated damage, which causes necrosis and peri-vascular inflammation resulting in muscle hypoperfusion and atrophy.

HF usually occurs together with active skeletal muscle inflammation; however, it was demonstrated also in cases with low inflammatory activity of skeletal muscles, during immunosuppressive treatment or even when in remission.

CMR findings. The presence of focal edema in T2 STIR sequences is common PM-DM and it is indicative of active myocardial inflammation; an increase in the T2 ratio can often represent the only alteration recognized by conventional CMR. However, the presence of a coexisting myositis can result in a large number of false negatives. Furthermore, cardiac involvement in PM-DM, although often subclinical, can simulate clinical manifestations of acute viral myocarditis; in these cases, T1 and T2 values, measured in the myocardium and thoracic skeletal muscles, can show an increased ECV values of both myocardial and skeletal muscle in PM-DM, allowing the differential diagnosis and an early treatment.

The distribution pattern of fibrotic damage substantially overlaps the other forms of autoimmune myocarditis, with a typical intramural and/or sub-epicardial pattern and a non-ischemic distribution, with a typical location at the infero-lateral wall (Fig 5); therefore, the differential diagnosis is not always possible on imaging, and it more often relies on clinical, laboratory and bioptic criteria.