Table 1: Causes of the Tree-in-Bud Pattern

Tree-in-bud (TIB) sign represents centrilobular, well-defined, soft-tissue micronodules in linear, branching distribution, resembling a tree in bud. The finding indicates disease of the peripheral airways that develops due to plugging of small airways with fluid, dilated bronchioles, bronchiolar wall thickening and peribronchiolar inflammation.[1] TIB sign is not visible on chest radiographs, whereas is well depicted by thin-section multi-detector computed tomography (MDCT). The smallest portion of lung visible on MDCT is the secondary pulmonary lobule, measuring 10-25 mm in diameter. It is surrounded by connective tissue septa. Each lobule is supplied by a lobular bronchiole (l mm in diameter) and a pulmonary artery, both of which are located in the center of the secondary lobule[1] (Fig. 1). 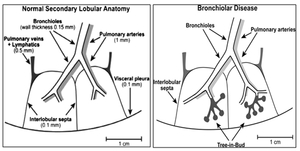 Because visibility on CT is limited to bronchi more than 2 mm in diameter, in the absence of disease, the peripheral airways are not visible on high resolution CT. [1]  Their branching become visible in the presence of mucoid impaction, endo- and peribronchial inflammation resulting in a V- or Y-shaped branching pattern, [2]  which together with peripheral (within approximately 3–5 mm of the pleural surface), small (2–4 mm in diameter), centrilobular, and well-defined nodules of soft-tissue attenuation forms the tree-in-bud sign [3] (Fig. 2).

The tree-in-bud pattern is often seen at MDCT chest imaging as pattern of bronchogenic spread of Mycobacterium tuberculosis. It consists of centrilobular, branching opacities with or without centrilobular nodules, or thickened interlobular septa. Ancillary findings are consolidation, cavitation and lymphadenopathy.  This usually occurs in the apical and posterior segments of the upper lobes and in the superior segments of the lower lobes.

Nontuberculous mycobacterial infection, also known as atypical mycobacterial infection, are most commonly caused by Mycobacterum avium-intracellulare, often referred to as the MAC complex, and Mycobacterium kansasii. The classic form of atypical mycobacterial infection produces feature almost identical to tuberculosis. Infection occurs in the apical and posterior segments of the upper lobes and superior segments of lower lobes, cavitation is common, multiple cavites can be observed, and it is slowly progressive. MAC lung disease occurring in older women is non-cavitary and is associated with bronchiectasis, multiple small lung nodules, approximately 5 mm in diameter, which may be found at any lobe almost[5] ( Fig. 3).

There are three types of  aspergillosis:

Semi-invasive aspergillosis - Begins as a focal consolidation in the apex of one or both lungs which excavate over a period of month and form a crescent-air sign. It develops to a thick-walled cavity, which later becomes thin walled and contains a fungus ball. Ancillary findings are TIB pattern and ground glass opacities.

Invasive aspergillosis - Imaging findings are multiple nodular areas of consolidation, which frequently cavitate and may show crescentic radiolucencies. Another characteristic finding is pulmonary mass surrounded by a zone of ground-glass attenuation and TIB pattern.

Allergie bronchopulmonary aspergillosis - Characteristic imaging finding is central branching opacities due to mucoid impaction of the bronchus and resembles as a finger in glove or V pattern. Other ancillary findings are lobar consolidation, extension of mucoid impaction to the bronchioles forming a TIB pattern [5] (Fig. 4).

Cytomegalovius infection is the most common agent of viral pneumonia. MDCT findings are nonspecific, and they include scattered and wide spread ground glass opacities, consolidation, thickening of bronchovasular bundle and TIB pattern. It may begin in the lower lobes peripherally and extend superiorly and centrally.

Cystic fibrosis is a multisystem disorder that affects exocrine glands, which produce abnormal, thick, viscid secretions, leading to impared mucociliary clearance. MDCT shows bronhiectasis that involves all lobes, but it is usually most severe in upper lobes. The lungs are usually hiperinflated. Other findings related to obstruction of small- to medium-sized airways include air trapping, mucous plugging, TIB opacities and atelectasis [6].

Kartagener’s syndrome is a subset of dyskinetic cilia syndrome, which is characterized by the triad of situs inversus, sinusitis and bronchiectasis. MDCT findings include bilateral bronchiectasis more severe in the lower lobes and bronchial wall thickening, hyperinflation, and focal areas of consolidation and atelectasis and small centrilobilar opacities (TIB pattern) [6] ( Fig. 5).

Obliterative bronchiolitis, also known as constructive bronchiolitis, refers to bronchiolar inflammation with submucosal peribronchial fibrosis associated with luminal stenosis and occlusions. MDCT findings include both central and peripheral bronchiectasis and bronchial wall thickening. Air trapping at expiratory high-resolution CT is the most sensitive sign for detecting. Centrilobular nodules from luminal impaction and TIB pattern can also be seen [4].

Pulmonary aspiration is a common clinical problem. Many predisposing conditions lead to it such as structural abnormalities of pharynx, esophageal disorders, neurologic defects and chronic illness. Diffuse aspiration bronchiolitis is characterized by chronic inflammatory reaction to repeated aspiration of foreign particles into the bronchioles. MDCT manifestations include centrilobular nodules and uni- or bilateral foci of branching areas of increased attenuation in TIB pattern, reflecting the bronchial distribution of the aspirated material [7] .

The most common thoracic imaging features are interstitial pneumonias, but small airways can be affected also. TIB can be manifestation of follicular bronchiolitis and organizing pneumonia. Ancillary findings include bronchiectasis, branching linear opacities, ground-glass opacities, air trapping, and honeycombing [4].

It is systematic disorder of unknown cause, characterized by widespread noncaseating granulomas. MDCT findings include axial intersitital thickening, nodular thickening along lymphatics, reticular opacities, fibrosis and bilateral limphadenopathy. It can mimic tree-in-bud opacities because there is nodularity along the walls of airways. However, the lumen of the airways is patent, and nodules also occur along the subpleural space and fissures, which indicate that the distribution is perilymphatic rather than centrilobular [8] (Fig. 8).

Silicosis is a fibrotic disease of the lungs caused by inhalation of dust containing free crystalline silica or silicon dioxide. Imaging findings are multiple nodules or small rounded opacities, larger nodules often predominate and they are typically distributed more in the upper lung zones, the nodules can calcify, lymphadenopathy, calcification of nodes may occur and TIB pattern [9].

Beriliosis is a disease caused by exposure to dust, fumes or aerosol of beryllium metal. MDCT findings are small peribrochial centrilobular nodules, TIB pattern, hilar lyimphadenoapthy, thickening of the bronchovascular bundles may be found, and in end stage, thin- and thick-walled cysts with traction bronchiectasis and lung distortion may be seen, particularly in the upper lobes [9] (Fig. 9).

Tumor emboli can grow within distal pulmonary arteries and veins and cause a branching, beaded appearance of the vessel, termed vascular tree-in-bud. TIB pattern may be seen due to spread of lung tumor or extrapulmonary primary malignancies that include breast, liver, renal, stomach, prostate and ovarian cancers [8] (Fig. 10).