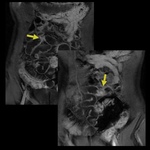 MRI can be considered a challenge for radiologists, especially in pediatric patients because it requires accurate preparation and great collaboration from the patient before and during the exam.

Moreover in younger children, parental participation is essential to achieve greater compliance. It is important to explain the methods of examination and the function of an adequate preparation. In our experience their presence is fundamental to reassure the child and to administer the oral contrast.

For the preparation patients should not eat any solid food and drink any fluid for 4-6 hours.

different patients response due to taste and texture.

We choose PEG solution as oral contrast because children favor its taste.

According to ESGAR/ ESPR consensus statement dosage is 20ml/kg with a maximum of 25ml/kg.

Furthermore, when possible, parents are advised to move the child (slow walk) to stimulate the passage of oral contrast medium to obtain better bowel distension.

In pediatric patients unable to swallow (for example in general anesthesia) oral contrast is administered via nasogastric tube, even if this condition takes more time and peristaltic pump may interfere with regular progression.

Administration of a spasmolytic is very useful to decrease peristaltic artifacts, as GRE T1 sequences may be highly compromised by them.

In literature, the most frequently used spasmolytic medications in pediatric patients are glucagon and hyoscine-N-butylbromide (butylscopolamine).

We use the latter that is administered intravenously at a dose of 0.5 mg/kg, with a maximum dose of 20 mg.

Generally half the dose is given before the exam and half before the intravenous contrast medium.

Gadolinium contrast media is administrated in dose 0.1 mmol/kg, in patients without renal impairment or previous allergic adverse reaction to gadolinium.

In MRI enterography to study pediatric bowel the sequences are the same as in the adult.

Balanced SSFP is a rapid sequence, useful to evaluate bowel distention. If it is adequate, we proceed with SSFSE in axial and coronal plane. It provides a good anatomical detail and is less influenced by movement artifacts. With TSE-T2  +/- Fat sat we assess mural inflammation or edema and changes in peri-enteric fat.

T1w FSPGR sequence is acquired with breath hold  before and after intravenous medium contrast. It discloses pathological contrast enhancement of bowel wall, lymph nodes, swelling of mesenteric vessels and complications as fistulous or abscess.

DWI can be used to localize active inflammatory bowel tract, lymph nodes and eventually complications as fistula and abscess. It is acquired with lower and highest b-value (50, 600, 900 seconds/mm2). It could be a marker of activity disease without use of contrast medium. There is yet standard quantitative parameter in ADC (Fig. 1).

CINE sequence are useful to evaluate peristalsis and to show pathologic dilatations of bowel loop otherwise not visible on static images (Fig. 2-3).

The majority of pediatric CD small bowel findings are similar to adult patients’.

Abnormal wall thickening is over 3 mm. It is measured in extended small bowel. It may be either concentric or eccentric and either smooth or nodular. It is often accompained by wall enhancement, that may be stratified or diffuse (Fig. 4).

Acute wall edema is detected with high signal intensity within thickened bowel wall and, sometimes, in the adjacent mesenter.

The fistulizing/perforating subtype is caused by transmural inflammation, it is characterized by deep ulcers. Complications are sinus tracts, fistulas and/or abscesses, they generally develop several years after diagnosis.

Bowel narrowing is a unusual feature at onset. In the progressive form it could determine a SBO.

Strictures are defined as luminal narrowing with pre-stenotic dilatation (>3 cm).

It is determined by inflammatory and fibrotic components.

It is important to identify the major components to find the most adequate therapy; several ways (DWI, late enhancement sequences etc) to differentiate them are being used; still, as 2018, no global consensus has been reached (Fig. 11).