The peritoneum is a serous membrane of mesothelial cells that lines the largest cavity of the human body (approximately 2m 2). It covers entirely or partially the different organs of the abdomen and pelvis. Through its folding, it forms 11 major ligaments, mesenteries and omentum, which not only divide this cavity into interconnecting compartments but also fixate and support the different organs. It maintains the homeostasis of the peritoneal fluid through its compartmentalization and its cellular biosynthetic properties that enable it of particulates and fluids transport. This intimate and complex relationship with organs result in a network like conformation that dictates the circulation flow direction of serous fluid and consequently the spread pattern of disease and malignancies into its compartments.

The peritoneum is the largest serous membrane of the body that encases the peritoneal cavity and is composed of two layers:

-the parietal layer, which covers the anterior abdominal wall, the anterior surface of the retroperitoneal cavity and the pelvis

-the serous layer, which lines the abdominal and pelvic structures.

This two layers form a virtual cavity: the peritoneal cavity which contains a slight amount of serous liquid that lubricate the contact surface of this two membranes and allow a smooth movement of the visceral organs.

In females, in contrast with men where the peritoneum forms a sealed space, the fallopian tubes create a communication between the peritoneal cavity and the extraperitoneal portion of the pelvis which constitute a natural route of dissemination for gynaecological infections and tumours.

The invaginations of the peritoneum constitute 3 different types of structures defined as follow:

Ligaments: structures that connect an organ to another organ or to the abdominal wall and are named usually after the respective viscera: coronary, falciform, gastrohepatic, hepatoduodenal, gastrocolic, duodenocolic, gastrohepatic, splenorenal and phrenicocolic

Mesenteries: double folds of peritoneum that attaches a segment of intestines to the abdominal posterior wall. We count the transverse mesocolon, mesentery of the small intestines, mesoappendix and sigmoid mesocolon.

Omentum: double layer of peritoneum that extends from the stomach to another organ. We enumerate:

Lesser omentum: it’s formed by the gastrohepatic and hepatoduodenal ligaments and extends from the lesser curvature of the stomach to the liver.

Greater omentum: it extends from the greater curvature of the stomach caudal and anterior to cover the intestines, then doubles back to ascend, posteriorly, to the inferior border of the transverse colon.

This peritoneal infoldings constitute an interconnecting network of spaces and recesses. The mesocolon divide the cavity in two large compartments: the supra and inframesocolic spaces.

The inframesocolic area is separated obliquely into right and left compartments by the small intestines mesentery, which extends from its insertion at the ligament of Trietz to the right iliac fossa. The left inframesocolic space is larger than the right one and communicates, except at the sigmoid mesocolon, freely with the pelvic cavity. The right inframesocolic is inferiorly limited by the caecum. Lateral to the ascending and descending segments of colon we find the paracolic gutters. Even if both of these peritoneal recesses are connected to the pelvis, only the larger right one communicates with the right supramesocolic space. Other than the dimensional difference, the presence of an anatomical barrier: the phrenicocolic ligament, restrains fluid flow from the left paracolic gutter to the left supramesocolic compartment. This also explains the preferential right trajectory that the peritoneal fluid takes to reach the subphrenic and subhepatic spaces.

The pelvic peritoneal infoldings forms, in males, the rectovesical space and in females the uterovesical and the rectouterine space. The pelvic segment represents the most caudal segment of the peritoneal cavity. His recesses are subject to fluid collection, as they represent the most declivitous regions in both erect and supine positions.

The subperitoneal tissue contained in mesenteries and ligaments, extends between the respective suspended organs and the extraperitoneal space. This tissue stands of vessels, lymphatics, nerves and canals; structures that represent bidirectional natural pathways of illness dissemination due to the continuity of the subperitoneal space. Identifying them will enable us to accurately identify sites of disease spread. That means, if a tumour is discovered we should evaluate the haematogenous supply of the respective organ helps identifying nodes that are potential route for dissemination and vice-versa. If a nodule is identified knowing its localisation will help us identify the primary tumour. 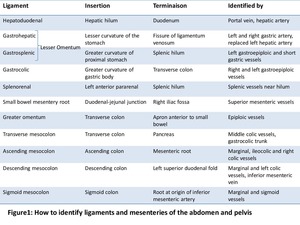 PC represents the leading cause of peritoneal malignancies and metastatic ovarian and gastrointestinal tract carcinomas the main source of PC. In fact, at the moment of discovery, 78% ovarian, 17%of gastric and 10% of colorectal carcinomas have already peritoneal metastases. Breast cancer represents most common extra-abdominal malignancy responsible of PC.

- Haematogenous: main pathway for high grade tumours secreting vascular permeability factor (VPF), which enable them to invade the vessels then disseminate and implant in the peritoneum

- Lymphatic: through invasion of the greater omentum and the subphrenic lymphatic systems that drain the peritoneal fluid, once these systems are blocked by tumour cells ascites will start to build up.

-Intraperitoneal seeding: through invasion of the mesothelial membrane into the peritoneal cavity. Once in there, the cancer cells will travel with the peritoneal fluid. The peritoneal fluid flows, due to the pressure fluctuations induced by respiratory movements and intestinal peristalsis, upward from the pelvis through the paracolic gutters, preferentially the right one, to reach the right subhepatic subphrenic spaces and lesser omentum. The left paracolic gutter is not only shallower than the right one but also limited superiorly by the phrenicocolic ligament, which restricts fluid circulation to supramesocolic space. Under the effect of gravity, it will regain the pelvis through the mesocolon where it accumulates in the dependant recesses: right paracolic gutter, ileocecal region, sigmoid colon and Douglas pouch/rectovesical space, which represent also common sites for carcinomatosis implants. Intraperitoneal seeding represents, by far, the most common pathway for carcinomatosis dissemination(Fig2). 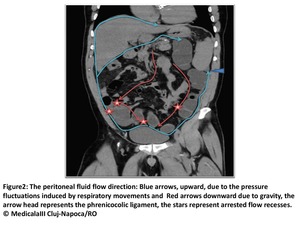 Through our comprehension of the peritoneal fluid circulation and peritoneal disease dissemination routes, we will be able to develop a list of ‘’hot spots’’ susceptible of hosting early stage pe ritoneal carcinomatosis implants: Fig3 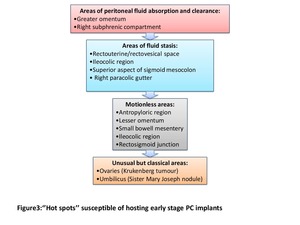 Although MRI and PET-CT are showing promising results, contrast-enhanced MDCT still represents the primary imaging modality for PC detection. Especially in non-cooperative patients, it allows us to gather a wealth of clear and specific information about a large and complex anatomical region in a brief amount of time to accurately assess PC(Fig4). 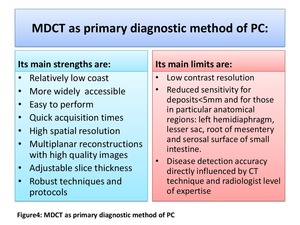 Although, it is the most common revealing sign of PC, present in 70% of patients, it is not specific. The loculated aspect of ascites is more evocative PC. This accumulation of fluid can be explained by two principal mechanisms: a blockage of the subphrenic lymphatic system responsible of peritoneal fluid reabsorption and/or an excess of fluid production due to an increase of vessels permeability(Fig6). 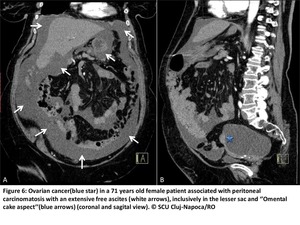 Depending on the primary tumour the peritoneal implants may show different morphological aspects:

Micronodular milky spots <5mm and/or nodules ,with oval or star like form and speculated margins, ranging from 5mm  to, when they conglomerate, stellar mesenteric masses of several centimetres. Tunica serosa and subserosal fat of greater omentum, lesser omentum, and mesentery are typical localisations(Fig7). 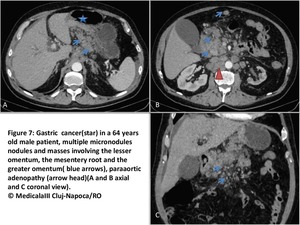 In the normal subject, the grater omentum is not identifiable. Its involvement is detected, initially, by the stranding of the omental fat and the appearance of micronodules, that progress and confluent to form masses separating the bowel loops from the abdominal wall realizing the classical “omental cake”aspect(Fig8 and 9). 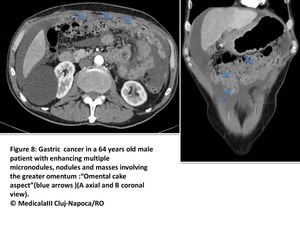 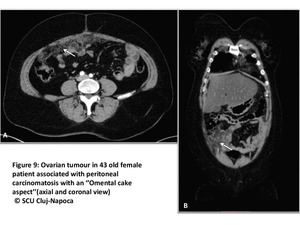 Invasion of the mesentery:

At the beginning, we detect an Infiltration of mesenteric fat with nodules that can confluent to form a “stellate” mesenteric mass. As this mass progressively grows and replaces the mesenteric fat, we observe a retraction of mesenteric structures and an implantation of tumour cells and formation of nodules on its peritoneal lining. These modifications will manifest by an abnormal fixation of small intestine loops and thickening of the stomach walls (Fig10). 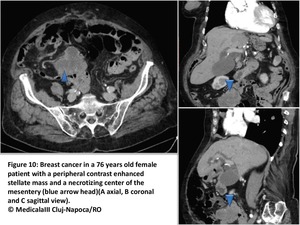 The hepatic ligaments and fissures are common sites of nodular or plaque-like tumour deposits. These peritoneal infoldings communicate with periportal space, which is commonly affected in disseminated carcinomatosis. On MR, an enhancing tumour visualized reaching into this space may give the aspect of a fat porta hepatis(11Fig). 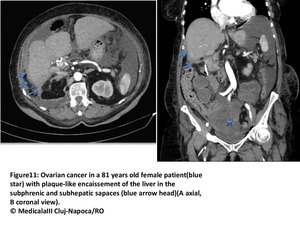 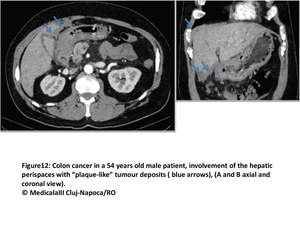 Subcapsular infiltration with deposits that range from tiny nodules to focal well-defined biconvex deposits and that may typically result in scalloping of underlying parenchymal tissue(Fig13 and14). 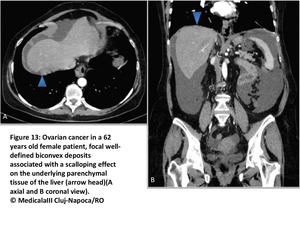 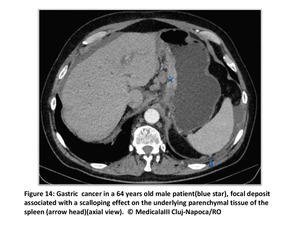 Nodular or plaquelike lesions along peritoneal bowel surfaces are common findigs suggestive of bowel involvement. We can also observe distorsion and wall thickening associated or not with intestinal obstruction. Omental and mesenteric implants can extend to the serosa of colon and small intestine(Fig15 and 16). 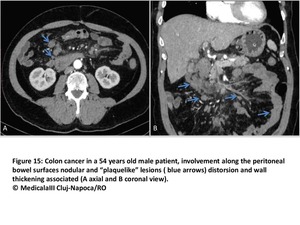 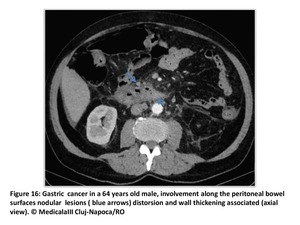 Currently, lymphomatosis, tuberculosis, mesothelioma, and pseudomyxoma peritonei represent the most common differential diagnoses to be considered when diffuse peritoneal involvement is diagnosed. Making the difference between PC and the previous mentioned pathologies is quite crucial because whereas PC requires extensive cytoreductive surgery and HIPEC, those diseases, for the most part, require only medical treatment.

Pseudomyxoma peritonei is characterised by the intraperitoneal accumulation of a recurrent, rebellious, gelatinous ascites secondary to rupture of a mucinous tumor arising, in most of the cases, from the appendix.

Although the CT findings are very similar to those related to PC, there are some aspects that point to PMP(Fig17):

• ascisites accumulation and extention accompanied by scalloping of the visceral surfaces, particularly the liver

• the greater omentum and the diaphragmatic peritoneum are common sites for lesions, while the  serous lining of the digestive system is rarely affected

• tends to remain localised to the peritoneal cavity

• visualisation of a fluid or soft-tissue mass on the appendix 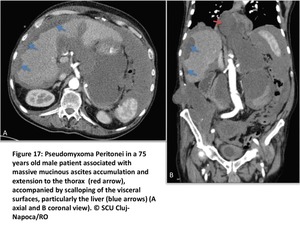 Malignant peritoneal mesothelioma is a rare, aggressive primary tumour of the mesothelium that rises in the peritoneum, pleura or pericardium. It has a strong association with asbestos exposure in 40-80% of the cases. Although imaging is not of big help considering the large overlap with PC imaging aspects, clinical examination findings play a major role in differentiating the two entities:

• preaortic and retroperitoneal lymphadenopathy with tendency  to confluent into masses encasing the mesenteric vasculature, producing the ‘‘sandwich’’ sign. These masses are bulky, soft, non-obstructing, homogeneous that shows no significant necrosis, and they seem to be less vascularised than carcinomatosis

• presence of tumours in the gastrointestinal tract, especially the stomach and the terminal ileum.

Peritoneal tuberculosis is a result of peritoneal involvement in tuberculosis and usually seen in association with other forms of gastrointestinal tuberculosis. Evoke before an exudative ascites associated with:

• hepato-splenomegaly and calcifications of the spleen

• enhancement and regular thickening of the parietal peritoneum

• retroperitoneal and peripancreatic adenopathy with necrotic center and ring-enhancement

• associated involvement of the ileocecal wall

An accurate preoperative evaluation is vital to determine the adequate type of treatment and to ensure optimal outcome. The PCI, proposed by Jacquet and Sugarbaker, represent a reliable system to redact a systematized staging radiology report, which takes into consideration in the same time quantitative and distributional aspects of PC implants from different primary tumours.

The radiological assessment efficiency of this method is still limited when it comes to micronodules<5mm especially when localised adjacent to the small intestines and the subphrenic space. In these cases explorative surgery and histopathology remain the gold standard.

It is essential to thoroughly and structured assess the different compartments as specified in the PCI, paying extra attention to the common regions for PC previously mentioned.

These are ‘’hot spots’’ are susceptible of hosting early stage peritoneal carcinomatosis implants. 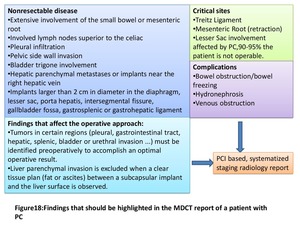 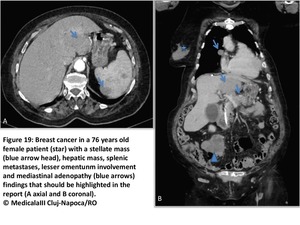 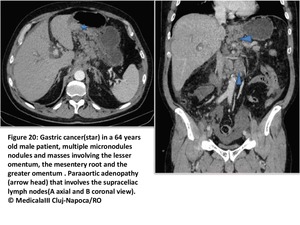 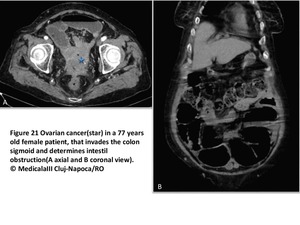