Clinical flowchart associated with dynamic ultrasound examination in the study of pathological conditions of the hip: what the Radiologist should know.

Fig. 23: Correct probe position, US image (axial plane) and anatomic scheme for the...

Fig. 24: Correct probe position and US image (longitudinal plane) for the study of the...

Fig. 25: Correct probe position and US image (longitudinal plane) for the study of both...

Fig. 27: Correct probe position, axial US scan and anatomical model for the...

Fig. 31: Correct probe position, axial US image and anatomic scheme for the study of the...

Fig. 33: Correct probe position and axial US image showing the short axis of the sciatic...

The clinical "flowchart" consists of a series of tests for the evaluation of: coxo-femoral joint motility, integrity of tendon (degenerative tendinopathies, inflammatory pathologies, traumatic injuries) and muscles fibers (traumatic and non-traumatic lesions), nerve structures integrity, and the presence of bursitis (iliopsoas and trochanteric bursitis).

The hip is evaluated firstly in a 90° flexed position, followed by internal rotation, external rotation and extension manouvers (Fig.1-4). 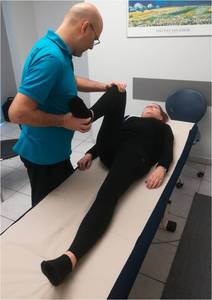 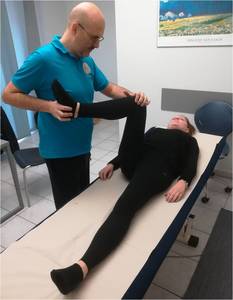 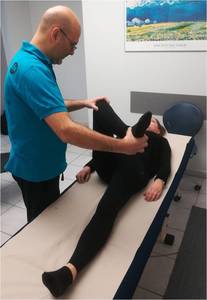 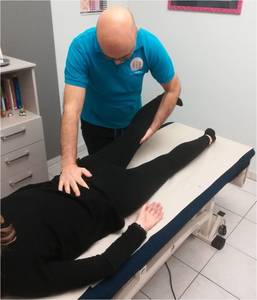 FAI is defined as the outcome of a series of congenital or acquired pathologies of the hip that has as its main pathogenetic element an abnormal contact between the two articular components of the hip, the acetabulum and the proximal part of the femur. This condition causes an alteration of the mechanics of the coxo-femoral joint which can cause pain and disability. Furthermore, the abnormal forces caused by impingement within the hip can lead to long-term lesions of the acetabular labral and/or cartilage and represent a predisposing factor to the development of primary coxarthrosis.
The clinical diagnosis is performed with a series of tests on the patient lying in a supine position. First of all, it is important to evaluate the bow of the movement of the hip affected by FAI. The hip usually presents limited articulation, especially in flexion and internal rotation.

Patients with FAI typically have anterolateral hip pain. They often cup the anterolateral hip with the thumb and forefinger in the shape of a “C,” termed the C-sign. Pain is sharp when turning or pivoting, especially toward the affected side. It can worsen with prolonged sitting, rising from a seat, getting into or out of a car, or leaning forward. Pain is usually gradual and progressive (Fig.5). 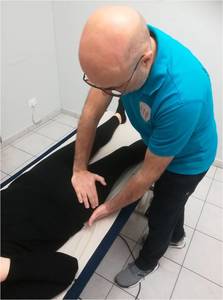 The operator, with the patient in the supine position, brings the foot of the side to be examined on the contralateral knee and exerts a gentle pressure which in case of positive test results in pain (Fig.6). 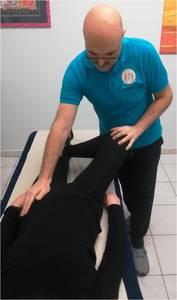 The patient is lying on the bed and the doctor flexes the leg at 90 degrees and first applies an internal rotation and then adds an adduction movement.

Reproducing the patient's anterolateral hip pain is consistent with FAI.

The test is performed on both hips and can be repeated at different angles of flexion of the hip (Fig.7). 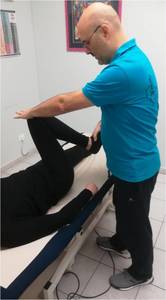 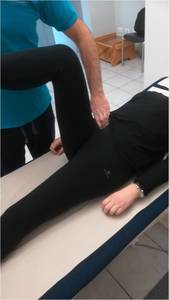 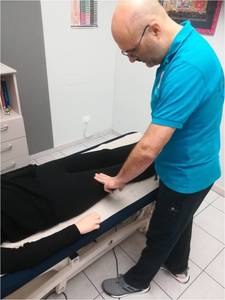 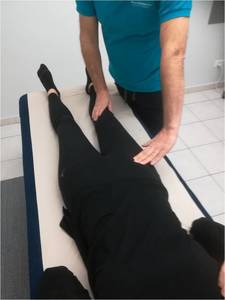 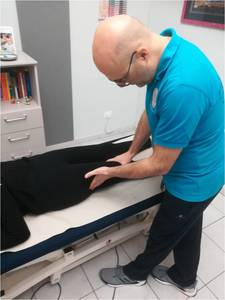 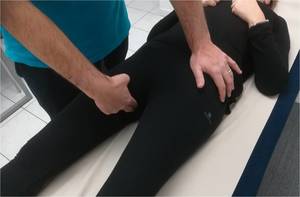 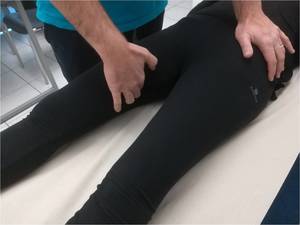 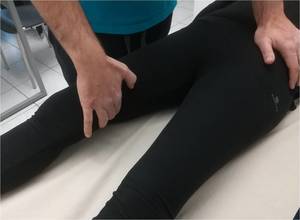 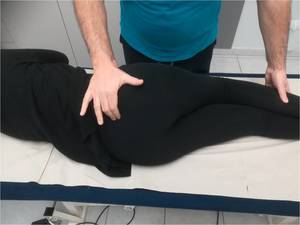 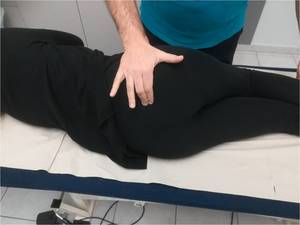 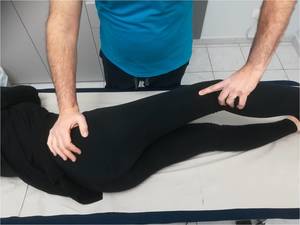 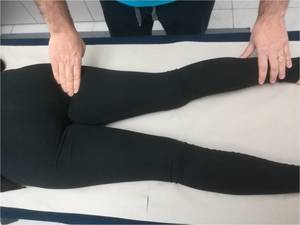 The sign (or monouver) of Lasègue, also called "sign of Lazarevic", is a test that can be performed by the operator during the physical examination to assess whether a patient who complains of back pain has or not an involvement of the sciatic nerve, typically due to a herniated disc (often at the level of the fifth lumbar nerve). It may also be indicative of meningeal irritation.

With the patient lying down on his or her back on an examination table, the examiner lifts the patient's leg while the knee is straigh (Fig.19). 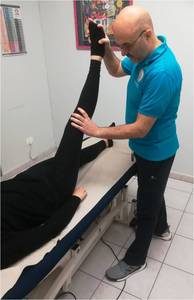 PALPATION TEST TO EVALUATE THE PRESENCE OF BURSITIS:

- insertional area of the iliopsoas to evaluate the presence of iliopsoas bursitis (Fig.2O) 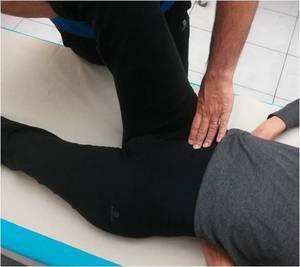 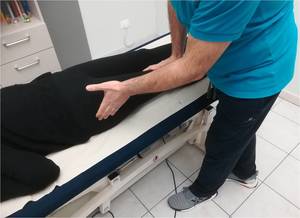 We could divide the hip into four quadrants and normally it's important to focus the US examination above all to the quadrant affected by the clinical symptomatology.

Here it is a list on what structures should be identified in each quadrant.

US images with the corresponding detailed anatomical scheme, indicating also patient and probe correct positioning, are showed below:

With the patient supine, start the examination from the anterior superior iliac spine (ASIS) placing the probe in the axial plane, to visualize the short tendons and muscle bellies of the sartorius and the tensor fasciae latae (Fig.22). Analyze them by means of axial and sagittal planes. Shifting the probe caudally over the muscle bellies, the sartorius directs medially to reach the medial thigh passing over the rectus femoris muscle, whereas the tensor fasciae latae directs laterally, superficially to the vastus lateralis.

Place again the probe over the ASIS and move it caudally to reach the anterior inferior iliac spine (AIIS) to examine the direct tendon of the rectus femoris (Fig.23). Rotate the transducer of 90° to perform also long-axis planes and note an hypoechoic area with posterior acoustic shadowing under the direct tendon (Fig.24). It represents the anisotropic effect due to different orientation of the indirect tendon fibers, which direct more externally and obliquely with respect to the direct tendon, inserting on the acetabular tubercle (Fig.25).

Perform a series of axial scans medial to the rectus femoris and lateral to the femoral neurovascular bundle, until you visualize the iliopsoas muscle belly and its hyperechoic tendon. It is located in a postero-medial eccentric position in the context of the muscle belly (Fig.26) and it inserts on the corresponding smaller trochanter; study it on axial and longitudinal orientations. The iliopsoas synovial bursa is located between the anterior capsule of the hip joint and the iliopsoas muscle, but it is normally collapsed and can be detected with US only when dilated by pathologic fluid; in 15% of cases it could communicate with the hip articular space.

It is located medially to the rectus femoris and iliopsoas muscleand tendon. In latero-medial direction, it consists of the femoral nerve, the common femoral artery and the femoral vein (Fig.27). In this region, it could be useful to check for possible enlarged lymph nodes.

With an oblique sagittal scan over the femoral neck, you can see the joint space located medially and distally to ASIS. It is possible to identify the anterior portion of the fibrocartilaginous labrum of the acetabulum, the anterior capsular profile (a hyperechoic linear structure) and the femoral head coated by the hypoechoic articular cartilage (Fig.28). At the base of the femoral head there is the anterior capsular recess which is not appreciable in normal conditions. Notice that in obese patients, lower frequency or convex probes may help the examination. 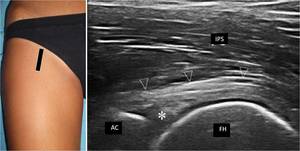 The patient is placed with the thigh abducted and externally rotated and the knee bent.

Identify the osseous landmark of the anterior surface of the pubis and with a sagittal scan analyze the insertional components of the adductor muscles.  We will recognize a thick short conjoint tendon and three muscular layers: from the most superficial to the deepest, the adductor longus, adductor brevis and adductor magnus (Fig.29). Analyze every muscle belly by orientating the probe with axial and longitudinal planes.

Patient lies on the opposite hip assuming an oblique or true lateral position. Find the greater trochanter with axial scan and then move slightly cranially until you recognize three muscle bellies with their corresponding myotendinous junctions: from anterior to posterior side, the gluteus minimus (deep), the gluteus medius (with its anterior and posterior tendons) and gluteus maximus (more superficial). Over them, the tendinous component of the tensor fasciae latae appears as a hyperechoic band, separated by fatty cleavage tissues and a synovial bursae. (Fig.30). This bursa is not visible in normal conditions, like the trochanteric bursa of gluteus maximus and gluteus medius.

Investigate this region  with the patient prone. Start the US examination with axial planes from the ischial tuberosity, a useful landmark to visualize the tendon insertion of the ischiocrural muscles. In the latero-medial direction we identify the conjoint tendinous insertion of the long head of the biceps femoris with the semitendinosus and therefore the tendon of the semimembranosus, which muscle is very thin and has a very short proximal tendinous component (Fig.31-32).

Fig. 31: Correct probe position, axial US image and anatomic scheme for the study of the insertion of the hamstrings on the ischial tuberosity (IT). 1= biceps femoris; 2= semitendinosus; 3= semimembranosus.

The sciatic nerve is seen as an oval shaped structure with fascicular echo pattern emerging under the piriformis muscle, lateral to the hamstring insertion on the ischial tuberosity. Study it on both trasverse (Fig.33) and longitudinal planes.