Fig. 1: A case of MINOCA in a 62-year-old female with indeterminate etiology of MINOCA....

Fig. 7: Fig. 6. same with Fig.3. After administration of intraarterial nitroglycerin,...

Fig. 13: Same patient with Fig.11. Normal coronary arteries are demonstrated on the...

Fig. 11: A case of myopericarditis in a 33-year-old male patient. Moderate amount of...

Fig. 15: A case of Stanford type A aortic dissection with secondary myocardial... 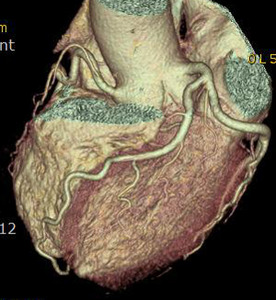 Fig. 1: A case of MINOCA in a 62-year-old female with indeterminate etiology of MINOCA. The patient presented into the ED with acute chest pain, but her initial ECG and cardiac troponin was normal. A. there is no evidence of obstructive coronary artery disease on a volume rendered image. B. Subendocardial perfusion defect along the apical inferolateral wall is noted (arrowheads), suggesting AMI in the left circumflex coronary artery territory. 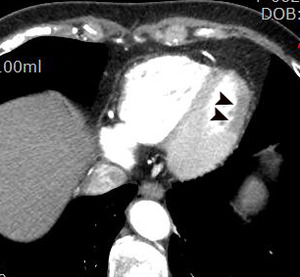 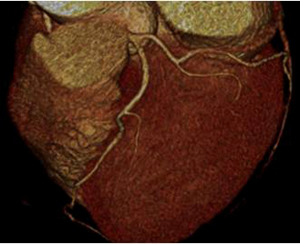 Fig. 3: Fig.3. A case of MINOCA caused by spasm-induced ACS in a 56-year-old male patient. A. Normal coronary arteries are noted on volume rendering images (A and B). Note that proximal middle right coronary artery is normal (arrow) while Troponin I increased (7.92) in this patient. 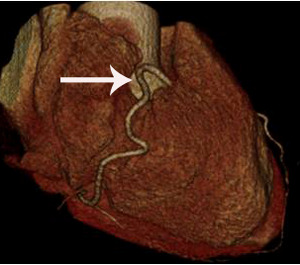 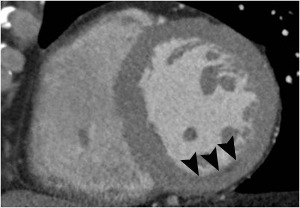 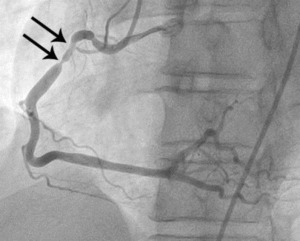 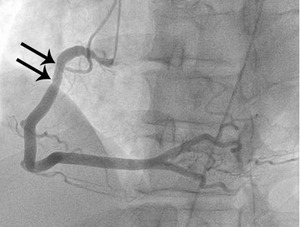 Fig. 7: Fig. 6. same with Fig.3. After administration of intraarterial nitroglycerin, the spasm (arrows) is completely relieved.

TCMP commonly occurs postmenopausal women with emotional or physical stress. The diagnosis of Takotsubo cardiomyopathy (TCMP) should include the following three (Fig. 8-10);

Stress induced cardiomyopathy (Takotsubo cardiomyopathy, TCMP) can be also subclassified into microvascular TPNOCA. Although exact pathophysiologic mechanism of TCMP is still unclear, in a study using myocardial contrast echocardiography, acute reversible coronary microvascular vasoconstriction may be a common pathophysiologic mechanism. In this study, extent of perfusion defect and wall motion abnormality significantly was reduced after intravenous adenosine infusion compared with baseline contrast echocardiography. In contrast, ST-elevated AMI patients demonstrated no change. Thus, the study concluded that microvascular dysfunction is a common final etiology although the exact mechanism of this entity remains unclear. If coronary CTA was performed by a retrospective ECG-gating, wall motion abnormality of the both ventricles can be analyzed. Thus, coronary CTA has a potential to diagnose TCMP as cardiac MR do. Characteristic CT features of TCMP are wall motion abnormality not following single coronary artery territory not accompanied by perfusion defect and obstructive coronary stenosis. 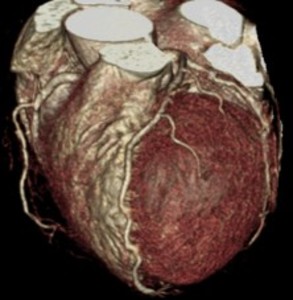 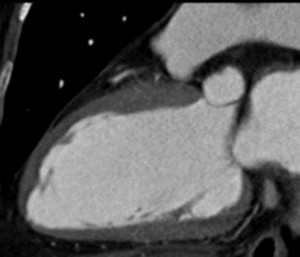 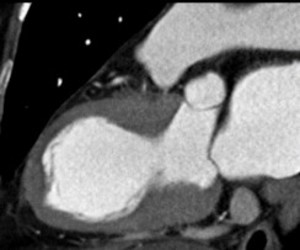 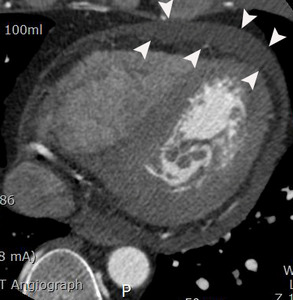 Fig. 11: A case of myopericarditis in a 33-year-old male patient. Moderate amount of pericardial effusion (arrowheads) is noted on an axial image of coronary CTA at the level of the left ventricle. However, there was no wall motion abnormality on cine view of coronary CTA (not seen here). Troponin I and c-reactive protein in the serum increased in this patient. 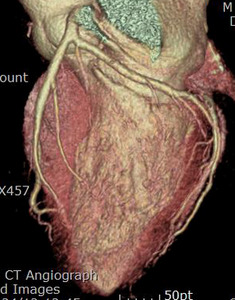 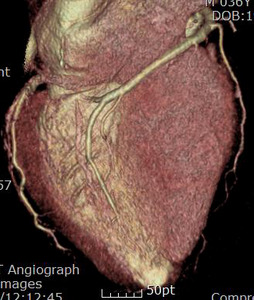 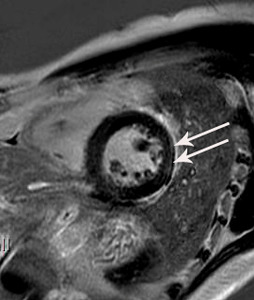 Fig. 14: Same patient with Fig.11. On cardiac MR performed on two weeks after cardiac CT, linear and patch delayed enhancement is noted at the lateral wall of basal left ventricle (arrowheads). The final diagnosis was myopericarditis.

Extracardiac causes of TPNOCA are aortic dissection extending into coronary artery (secondary coronary dissection) (Fig. 15) and pulmonary embolism. Cardiac troponin elevation in serum in patients with sub-massive or massive pulmonary embolism may be caused by the right ventricular stretching or ischemia. 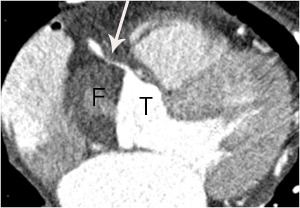