Imaging in worm infestations of the body- catch me if you can!

Fig. 5: A case of ascariasis.Ultrasonographic image of abdomen with high frequency...

Fig. 7: Atypical angiostrongylosis of the small bowel and liver in a 55-year-old man...

Fig. 2: Dracunculiasis. a and b Plain radiographs of the left knee and leg of a patient...

Fig. 6: A case of trichuriasis .Image from a barium enema examination in a 4-year-old...

Type I cyst(WHO CL,WHO CE1) - unilocular, presence of denser material in cyst (falling snowflakes inside cyst in US, or higher attenuation contents in CT), and low signal intensity rim in T2WI MR (11,12).

Type II cysts (WHO CE 2) contain daughter cysts in  periphery appearing as multiseptated cysts. Mother cyst has denser content than daughter cysts and appear as higher attenuation in CT and with different signal intensity in MR (13,14). Contained ruptures of the cyst due to trauma etc appear as floating membranes (water-lily sign) and are classified as WHO CE 3 (12, 15). WHO stage CE 4 is between type II and type III cysts.

Most of the imaging findings are due to chronic hepatic affection and its related complications. US display periportal fibrosis as echogenic cuffing and other findings like irregular liver surface, heterogeneous parenchyma etc 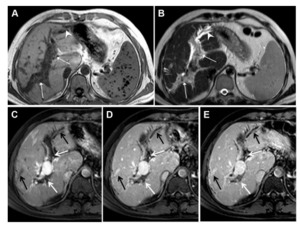 Barium fluoroscopy and US play  major role in diagnosis. 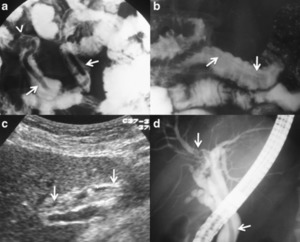 Fig. 4: Ascariasis. a. Barium fluoroscopic study of a 24-year-old woman previous history of ascariasis. The study shows a worm inside a jejunal loop (arrows). The faeces examination revealed ascaris eggs. Note that the head (blunt) of the worm points proximally (arrowhead), as is usual in this parasite b. Barium fluoroscopic study of a 37-year old male shows intestinal worms compatible with ascaris, note that the shown worm has swallowed barium contrast (arrows). c and d. 29-year-old woman with previous surgery of cholecystectomy. The US examination in C displayed a long echogenic filling defect without acoustic shadowing inside the common bile duct (CBD) (arrows), with other adjacent smaller filling defects compatible with gallstones and/or debris. The ERCP in D shows a worm inside the common bile duct whose head is introduced in the right hepatic duct (arrows).
References: - Carnero PR, Mateo PH, Martín-Garre S, Pérez ÁG, Del Campo L. Unexpected hosts: imaging parasitic diseases. Insights into imaging. 2017 Feb 1;8(1):101-25. 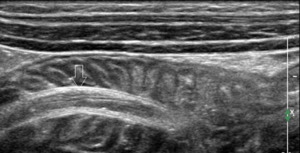 It is a subcutaneous disease caused by Dracunculus medinensis and is transmitted to humans through drinking water contaminated with Cyclops. Dead calcified worms can be seen incidentally as soft tissue worm-like calcifications on radiographs or CT.(2) 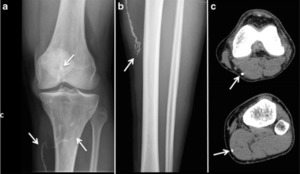 Fig. 2: Dracunculiasis. a and b Plain radiographs of the left knee and leg of a patient shows “worm-like” calcifications in the soft tissues caused by dead calcified worms. c. CT image of the left leg of the same patient as in a and b, confirms the dead calcified worms in the subcutaneous tissue and muscles of the left lower limb
References: Carnero PR, Mateo PH, Martín-Garre S, Pérez ÁG, Del Campo L. Unexpected hosts: imaging parasitic diseases. Insights into imaging. 2017 Feb 1;8(1):101-25.

Cysticercosis is caused by Taenia solium. Their definitive hosts are humans and intermediate hosts are pigs.Neurocysticercosis is classified in five stages regarding their evolution from active larvae to dead lesions as non-cystic, vesicular, colloidal vesicular, granular nodular, and calcified nodular.(20,21)

The vesicular stage - cyst or group of cysts (racemose form) containing the larvae. The cyst has content similar to CSF in CT and MR and protoscolex can be seen as eccentric dot with high signal intensity on T1WI, the ‘cyst with dot sign’. No surrounding oedema and enhancement is seen ( 20, 22-24).

Colloidal vesicular stage - parasite begins to degenerate and host develops a stronger immune response. The fluid of  cyst appears as higher signal on MR and higher attenuation on CT. The inflammatory response leads to surrounding oedema and ring enhancement of the cyst (22, 25).

Calcified nodular phase - represents dead parasite. CT is superior to MR when detecting the calcified lesions of this stage (22). 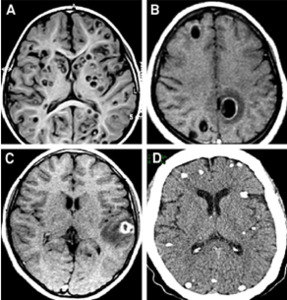 Trichuris eggs are transmitted through fecal-oral route. After their elimination in feces, Trichuris eggs become  infective within 15 to 30 days. Upon ingestion, the eggs release larvae in small intestine. The larvae mature during their migration to the cecum and ascending colon, where the adult worms attach themselves to mucosa. Barium enema examination  depict  worms as small elongated filling defects.(3)