Small airway diseases on HRCT: Imaging beyond the main airpipe

Fig. 21: Peri-bronchial thickening of sarcoidosis versus bronchiolar wall thickening in...

Table 3: showing radiological and pathological classification combined to propose a...

(1) High-resolution CT (HRCT) imaging, in which thin 0.5–1.5-mm slices are obtained every 0.5, 1, or 2 cm from apex to base for inspiratory scans, and limited, spaced HRCT slices obtained for expiratory scans.

High-resolution CT techniques sample the lung by acquiring thin, 0.5- to 1.5-mm slices every 0.5, 1, or 2 cm with gaps between slices. Scans are usually obtained from the apex to the base of the lungs during inspiration. Because the CT scanner must move and stop the patient for each slice, HRCT requires more time than spiral CT. HRCT scans typically require 2 seconds for each slice, or greater than 40 seconds for lung sizes greater than 20 cm in length. For expiratory scans, a smaller number of HRCT images are obtained, which are either evenly spaced from apex to the base or are obtained at anatomically determined locations. All the CT scan images in this poster are from HRCT chest performed on a 128 slice Toshiba MDCT scanner (CT techniques:128 slicer CT scanner, Toshiba Aquilion, Tokyo, 120kvp / 300mA, 0.5mm thickness) of patients  with chronic cough, shortness of breath or clinical suspicion of airway disease.

Small airway disease can manifest with direct or indirect signs or both on high resolution computed tomography5. On HRCT images, the considerable thickening of the small airway walls by inflammatory infiltrate and/or luminal and surrounding exudate render the affected small airways directly visible13. When the airways are obliterated by submucosal or peribronchial fibrosis, nodular, linear, or branching peripheral opacities may be seen 14.  ( Table 1 ). The imaging detail of each finding of small airway disease is below:


The imaging findings are summed up in following table: 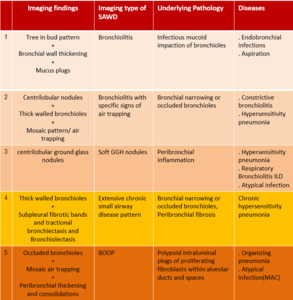 Direct and Indirect signs of small airway disease on imaging:

Table)7. However, this classification was largely based on the results of histopathological examination, which requires bronchoscopic or surgical biopsy that cannot be performed in all patients. Devakonda and fellows8 have proposed a diagnostic algorithm based on clinical context and CT findings (

link).This proposal appears useful, considering that most patients with suspected small airways disease do not have surgical lung biopsy, but correlation with pulmonary function tests and other lab findings still required.

Proposal for New approach for Classification:

By combining the pathological classification with the radiological findings, we have tried to come up with an easy approach depending on HRCT finding pattern, that could lead to underlying cause of small airway involvement. In our departmental data, four basic radiologic patterns of small airway disease were observed on CT scan ( Table 1 ):

2. Bronchiolitis with specific signs of airtrapping

We divide small airway disease patterns into three main categories and have tried to make it simple (Table.2). So, how to recognize bronchiolitis on HRCT? 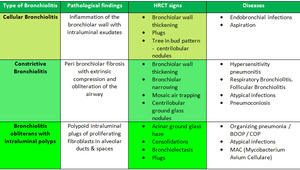 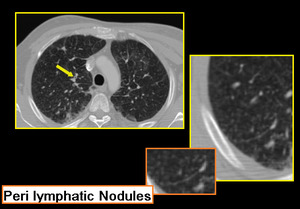 Fig. 22: Patchy mosaic areas in both lungs with attenuated vessels in a case of chronic pulmonary embolism. Thrombus is appreciated in right main pulmonary artery (arrow). 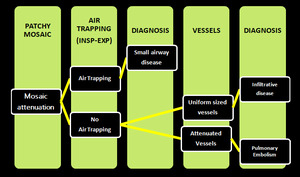