Fig. 1: General view of the game. The name of the game (Kern Spin Académie) comes from...

Fig. 3: Examples of two-sided question and answer cards: - Question number 5: How can...

Fig. 4: A detailed answer is available for each card on a digital tablet thanks to the...

Fig. 6: Answers to 2 of the questions proposed online to participants: (a) I was able...

Fig. 9: Example of a question and answer card determining the progress of the virtual...

To date, 2 games have been finalized:

Alternating questions and answers, it is composed of a game board, 189 cards, each with a question and an answer, divided into 3 categories (physical bases, sequences/image quality, miscellaneous), magnets, chips, a die, the rule and a box. Each category is associated with a color which is also that of the cards and of the spaces on the game board (Fig. 1). 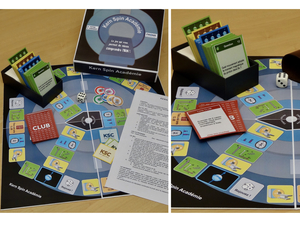 Fig. 1: General view of the game. The name of the game (Kern Spin Académie) comes from a joke between colleagues during discussions on MRI: Kerspintomographie was originally the perfectly correct German term for MRI, giving rise to our user club, the Kern Spin Club!

Board was drawn using a vector drawing software. For the dimensions, we have adapted to those of blank game boards available on online sales sites (Fig. 2). 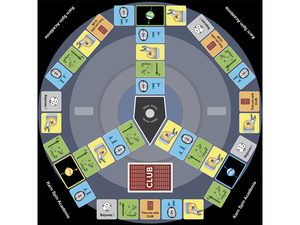 As in the Trivial Pursuit, the goal of the game is to get the 3 “rewards” (3 magnets, of course) corresponding to a correct answer on the 3 “Spin” spaces, before returning to the center of the board.

Each card includes a question on the front and an answer on the back which leaves enough space to also propose questions composed with images or diagrams (Fig. 3). So, we created 63 cards per category. In order to avoid too many low-stake spaces, we added special spaces requiring to draw a card, a kind of lucky card called “carte club” (18 cards). 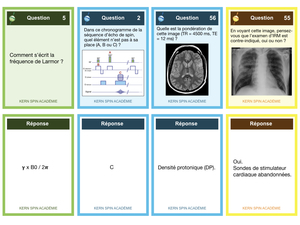 Each card is numbered allowing easy association with a more detailed answer that can then be present to participants on a digital tablet for example (Fig. 4). 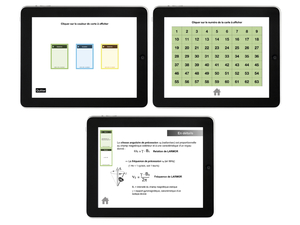 Fig. 4: A detailed answer is available for each card on a digital tablet thanks to the card number. Access is achieved through contextual menus (card color, then question number).

The game was first tested during training sessions with technologists from an MRI department (Fig. 5). 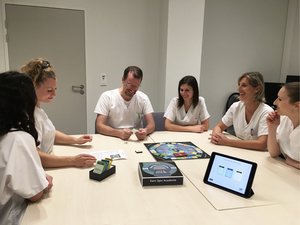 We used it in “real” conditions during a continuing education session dedicated to the basics of MRI (Comprendre l’IRM – University of Strasbourg, France – May 20 to 24, 2019).

The game was scheduled towards the end of the training week when the majority of the concepts had already been discussed. It could therefore be considered as a review session. Participants were divided into 2 teams of 2 people and 1 team of 3 people) in order to support possibly weaker students. Indeed, continuing education mixes people with variable practical experience as well as theoretical knowledge.

After explaining rules of the game, the game was able to start quickly. Participation was very active. We also noted establishment of discussions between participants of the same team to find the right answer. The game lasted about 50 minutes which falls in the estimated duration range.

In order to evaluate this pedagogical practice, participants were asked to complete anonymously, a survey online (Google Forms). Fig. 6 shows on a Likert scale, the distribution of the answers to two questions of the survey. 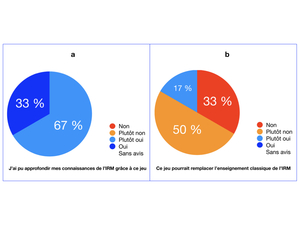 Fig. 6: Answers to 2 of the questions proposed online to participants: (a) I was able to expand my knowledge of MRI thanks to this game. (b) This game could replace the classic teaching of MRI.

The next step will be to translate the game into other languages (English, German and Portuguese at this stage). Fig. 7 shows examples of cards in German and English. 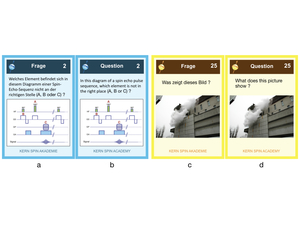 2. A Day at MRI (Une Journée en IRM): board game representing the patient's journey for an MRI examination.

This game is intended for 4 groups of players. Each group has a quarter of the board represented by different colors.

The goal is to guide a virtual patient, represented by a Playmobil figurine (Geobra Brandstätter GmbH, Zirndorf, Germany) towards the MRI scanner and completion of the examination by answering questions dedicated to MRI safety (on the blue spaces). Red spaces allow collection of performance criteria cards, necessary for the successful completion of the MRI acquisition (Fig. 8). 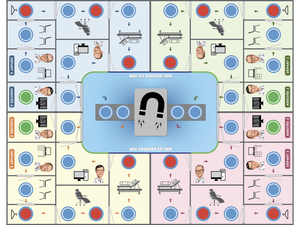 Fig. 8: A day at MRI: view of the game board. It is divided into 4 zones allowing to play 4 groups of players simultaneously.

An example of a question and answer card is shown in Fig. 9. As in the first game, the cards are numbered which allows, as well, association with a more detailed answer, presented to the participants on a digital tablet. 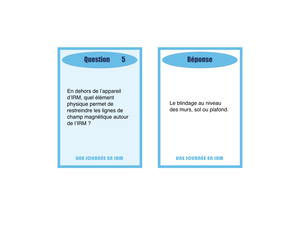 Fig. 9: Example of a question and answer card determining the progress of the virtual patient on the blue spaces: Question number 5: Outside the MRI scanner, what physical element can restrict the magnetic field lines around the MRI? Answer: shielding on the walls, floor or ceiling.

The “performance criteria” cards obviously depend on each virtual patient.

For example, for the patient who has a compatible MRI pacemaker, you must collect the cardiologist visit, monitoring system and implanted device manual cards. For other patients, it may be necessary to recover only one card (or none). The list of possible cards to recover is known to all players (on a summary sheet). But it is up to the players to choose the right card(s) to collect during a patient's journey (3 cards maximum).

To perform the MRI exam for a given patient with success, players must therefore arrive with the patient in the MRI scanner room holding the right performance criteria cards. The latter are compared with a reference response card, available per patient.

The team with the most successfully completed exams, wins the game. An example of cards “imaging prescription”, “response” and “performance criteria” can be seen in Fig. 10. 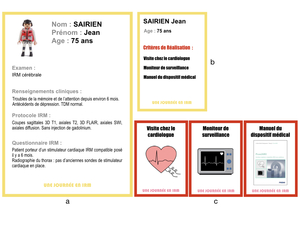