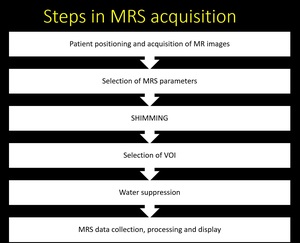 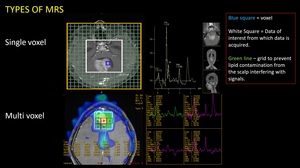 • The main limitation of this technique is restricted anatomic coverage ie, the assessment of only one single area during normal acquisition

• preferred technique for the evaluation of intra-cranial neoplasm

• Higher grade of shimming is required (difficult in posterior fossa)

Four methods are commonly used for localisation of volume of interest. 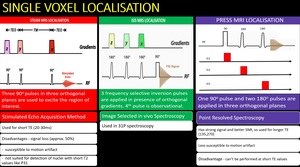 CSI is also termed as MRSI (Magnetic resonance spectroscopic imaging) as it combines features of both imaging and spectroscopy.

Used for multivoxel spectroscopy to cover a large area.

Spatial localisation is done by phase encoding in one, two or three directions to get one, two, three-dimensional spectroscopy respectively.

If the four main peaks of a spectrum (Ins, Cho, Cr, and NAA) are connected by a manually drawn line, the angle with respect to the X-axis is 45° in healthy subjects, an angle referred to as Hunter angle  Fig. 7 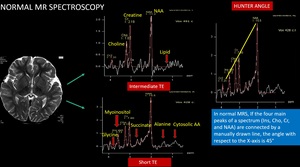 Creatine is an energy metabolite which serves as high energy phosphate and as a buffer in ATP/ADP reservoir. It has two peaks, Cr1 – 3.0ppm and Cr2-3.94ppm.

Myoinositol Acts as an osmolyte (cell volume regulator). It is a marker of gliosis that resonates at 3.5 ppm.

Lactate is a doublet that shows peak at 1.3ppm. At intermediate TE of 135ms, its peak gets inverted. It’s a marker of hypoxia.

Lactate is elevated in

Lipid is a maker of acute brain injury resulting in myelin destruction. It usually has two peaks. Lip1 at 0.9ppm and Lip2 at 1.3ppm. This can be differentiated from lactate peak by its board peak, shoulder to left and suppressed at TE 270. 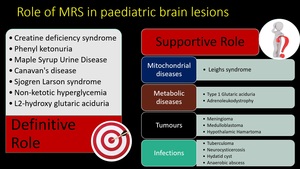 Fig. 9: Role of MR spectroscopy in pediatric brain lesions. MRS can be diagnostic in some conditions and it supports conventional MRI in some other conditions.

Occurs as autosomal recessive disease due to deficiencies of arginine-glycine amidinotransferase (AGAT)and guanidinoacetate methyltransferase (GAMT) or as X-linked disorder due to mutation of SLC6A8 that codes for cellular transporter of creatine. Conventional MRI is usually normal. Magnetic resonance spectroscopy shows a markedly reduced or completely absent creatine peak; this is most easily seen on long TE spectra. In addition, short TE sequences show a broad guanidinoacetate peak at 3.78 ppm. 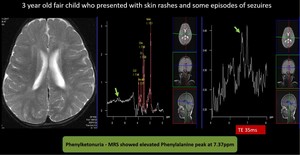 Autosomal recessive neurocutaneous syndrome and leukodystrophy with clinical triad of ichthyosis, intellectual disability, and spastic diplegia or tetraplegia.  Confluent T2/FLAIR hyperintensities of the white matter, typically involving the periventricular white matter and centrum semiovale, often with a posterior or occipital predominance. In MRS abnormal resonance at 1.3 ppm, only in cerebral white matter, indicative of accumulation of lipids. 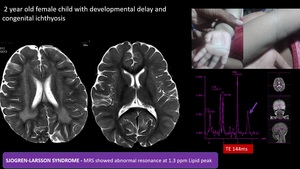 Fig. 14: SJOGREN-LARSSON SYNDROME - Confluent T2 hyperintensities in periventricular white matter with posterior predominance. MRS showed Abnormal resonance at 1.3 ppm (Lipid peak) , only in cerebral white matter- due to accumulation of lipids such as fatty aldehydes and fatty alcohols,with clinical correlation of congenital icthyosis diagnosis of SJOGREN-LARSSON SYNDROME was made. 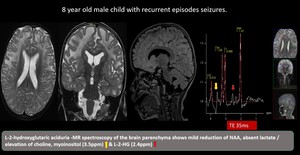 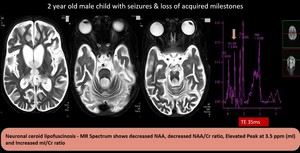 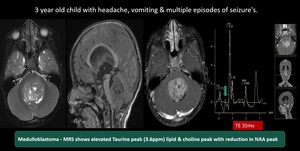 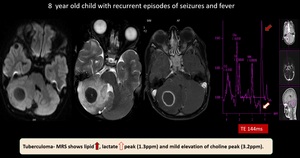 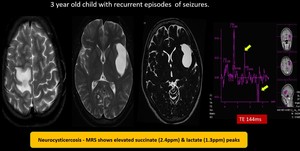